Accessibility links
University Of Cincinnati Trustees Vote To Take Marge Schott's Name Off Ballpark : Live Updates: Protests For Racial Justice The board cited Marge Schott's "record of racism and bigotry" in its decision. The late philanthropist and Cincinnati Reds owner was reviled for using racial and ethnic slurs and praising Hitler. 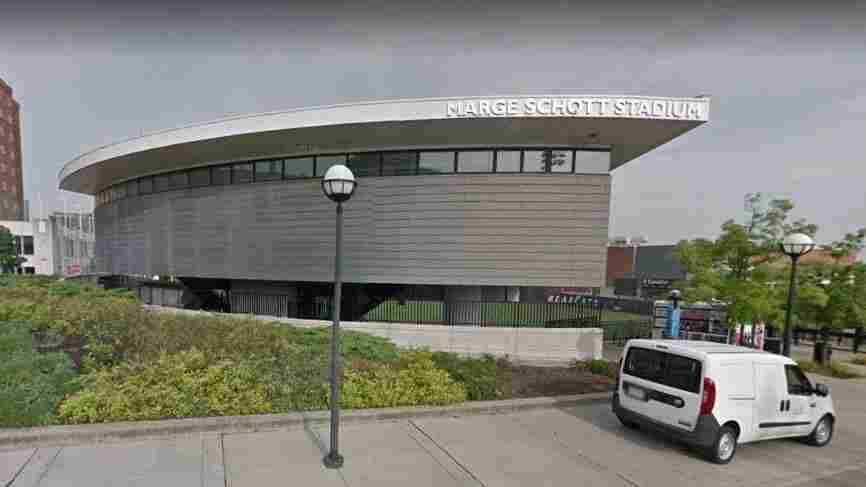 "It's fantastic to see the change [we] brought about," says University of Cincinnati pitcher Nathan Moore, who has been an outspoken proponent of renaming the university's Marge Schott Stadium. Google Street View/Screenshot by NPR hide caption 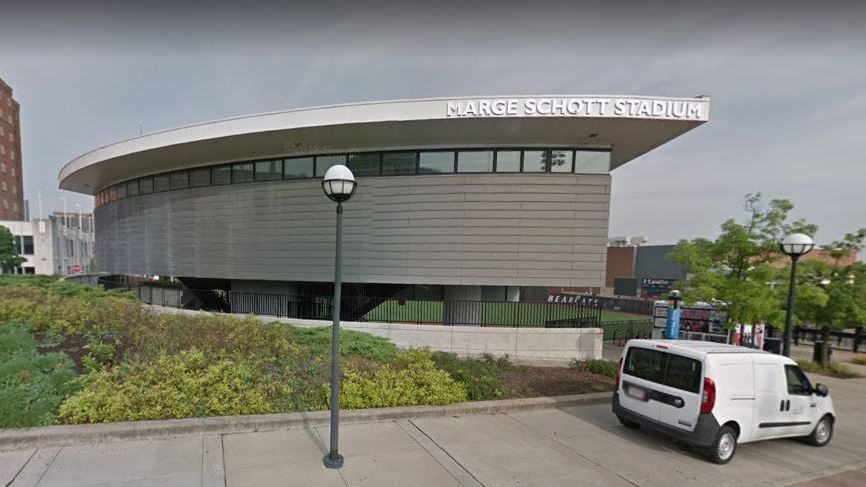 "It's fantastic to see the change [we] brought about," says University of Cincinnati pitcher Nathan Moore, who has been an outspoken proponent of renaming the university's Marge Schott Stadium.

In the current climate, a lot. And enough to force change when that name offends.

On Tuesday, the University of Cincinnati board of trustees voted unanimously to take down the name of Marge Schott from the school's baseball stadium, effective immediately.

The board cited Schott's "record of racism and bigotry" in making its decision.

Schott, who died in 2004, was the wildly controversial owner of Major League Baseball's Cincinnati Reds from 1984 to 1999. Her racial and ethnic slurs against African American, Jewish and Japanese people prompted a one-year ban from baseball in 1993. After praising Adolf Hitler in a 1996 ESPN interview, Schott was forced to give up day-to-day control of the Reds until 1998.

She was also a philanthropist in her hometown of Cincinnati. She gave money, through her foundation, to the city zoo, hospitals and the university. Her $2 million gift to the school's athletic programs led to the 2006 naming of Marge Schott Stadium.

But now, 14 years later, Schott's controversies have superseded her giving.

She Was Generous. She Was Also Racist. Should This Ballpark Carry Her Name?

In a resolution, the board says it's accepting the recommendation of University President Neville Pinto to remove Schott's name from the baseball stadium as well as a space in the school's archives library.

"The recommendation is grounded in the firm belief that speaking out against exclusion is as essential as speaking up for inclusion," Pinto said in a statement. "I hope this action serves as an enduring reminder that we cannot remain silent or indifferent when it comes to prejudice, hate or inequity."

This month, in the wake of nationwide protests sparked by the killing of George Floyd while in Minneapolis police custody, former UC baseball player Jordan Ramey started a petition drive to change the stadium's name.

"Black kids should not be made to play and represent a name such as hers and white kids should not be celebrating her legacy subconsciously," the petition read. "As a community of former and current players, staff, students, alums, and Cincinnatians alike, we will not be promoting her, or her legacy any longer."

This week, the petition had about 10,000 signatures.

Nathan Moore, who plays on the university's baseball team and has been an outspoken supporter of the petition drive, praised the board's action.

"It's fantastic to see the change [we] brought about," Moore said Tuesday, adding that he learned about the decision in a phone call from Pinto. "It shows that standing up for something you believe in is important. When student athletes choose to raise their voices in the right way, it can lead to change."

This month, in response to the petition drive, the Schott Foundation released the following statement.

"The Schott Foundation continues on its mission to support and find qualified charitable programs and organizations for the betterment of the greater Cincinnati community. The foundation will support its community partners in any decisions that will progress unity of purpose and stand against prejudice in any manner."