Accessibility links
NASCAR Completes Noose Investigation; Can't Determine How It Got Into Driver's Garage : Live Updates: Protests For Racial Justice NASCAR releases picture of the noose found in driver Bubba Wallace's garage at the Talladega Superspeedway in Alabama. The organization also completed its investigation into what happened.

NASCAR Completes Noose Investigation; Can't Determine How It Got Into Driver's Garage

NASCAR Completes Noose Investigation; Can't Determine How It Got Into Driver's Garage 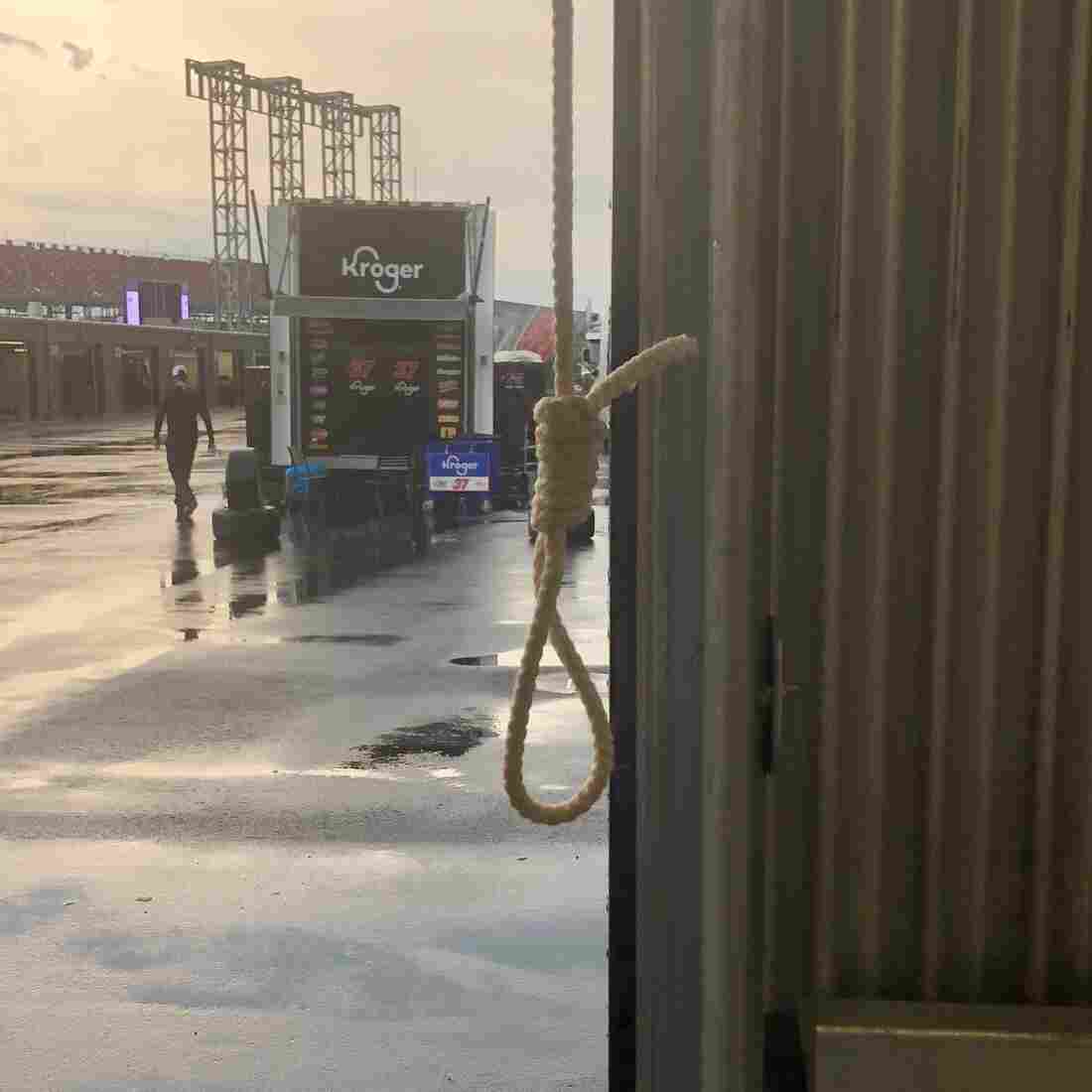 This photo, taken by NASCAR security personnel and released by NASCAR, shows the noose tied using a garage door 'pull rope' at the Talladega Superspeedway in Lincoln, Ala. on Sunday, June 21, 2020. NASCAR hide caption 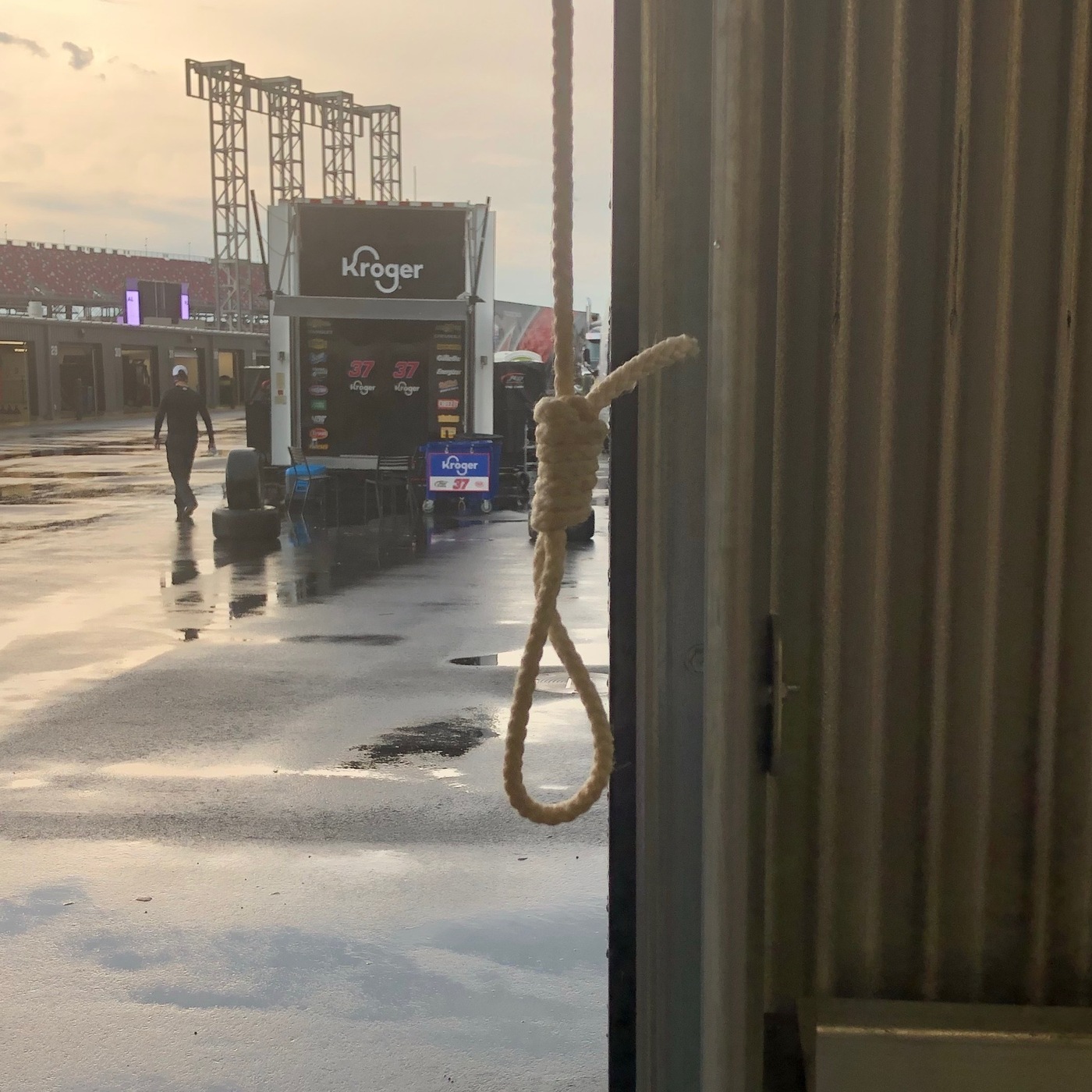 This photo, taken by NASCAR security personnel and released by NASCAR, shows the noose tied using a garage door 'pull rope' at the Talladega Superspeedway in Lincoln, Ala. on Sunday, June 21, 2020.

NASCAR has finished its investigation and says it still doesn't know who tied a noose that was discovered this past weekend in the garage stall used by African American stock car driver Bubba Wallace at Talladega Superspeedway in Alabama.

NASCAR also released a photo taken on Sunday by its security personnel of what it says was the garage pull rope tied into a noose at a Talladega race in October of 2019, and not reported until last weekend.

In a Thursday conference call with reporters, NASCAR President Steve Phelps said investigators conducted a thorough sweep of all garage areas across the tracks where NASCAR races. That's 29 tracks and 1,684 garage stalls. 44 of them are at Talladega. Phelps said they found only 11 stalls using a pull down rope tied in a knot. And only one was tied into a noose – the one discovered in Wallace's garage.

"We further determined," Phelps said, "the noose was not in place when the October 2019 race weekend began, but was created at some point during that weekend."

"Given that timing and the garage access policies and procedures at the time, we were unfortunately unable to determine with any certainty who tied this rope in this manner and why it was done."

"We'd like to have complete resolution here and have all the answers. I know that's unfulfilling. I wish there's more we could do but we can't and so we've drawn this matter to a close."

Phelps acknowledged the investigation's findings prompt another question – how could [the noose] have gone unnoticed by so many people in October 2019 and this past Sunday morning. The noose wasn't reported to a NASCAR official until late Sunday.

"Our ultimate conclusion for this investigation is to ensure this never happens again," Phelps said, "that no one walks by a noose without recognizing the potential damage it can do."

Toward that end, Phelps said NASCAR will be conducting thorough sweeps of garage areas and installing additional cameras in all garages.

"[And] we will mandate that all members of our industry complete sensitivity and unconscious bias training," he said.

NASCAR's Bubba Wallace Was Not The Target Of A Hate Crime, FBI Says

NASCAR's findings follow an FBI investigation that determined Wallace, the only Black driver in NASCAR's top racing division, was not the victim of a hate crime. Federal law enforcement officials confirmed the noose was in Wallace's garage since last October, long before he and his team were assigned the stall for this past weekend's scheduled race.

The FBI announcement earlier this week, that no crime was committed, unleashed allegations on social media that Wallace had perpetrated a hoax.

"Bubba Wallace and [his team] had nothing to do with this," Phelps said. "Bubba Wallace has done nothing but represent this sport with courage, class and dignity. It is offensive seeing anyone suggest otherwise, and frankly it's further evidence of how far we still need to go as a society."

But Phelps acknowledged his words might have fueled the emotions accompanying the roller coaster events that started with Sunday's report about the noose and now have ended with two investigations that found no crime, nor the person or people who tied the rope into a noose.

Sunday night, Phelps said in the initial statement that NASCAR was "angry and outraged, and cannot state strongly enough how seriously we take this heinous act."

Thursday, Phelps took "full responsibility" for using the strong words. At the time, he said, NASCAR felt one of its drivers had been threatened. But he said, in hindsight, he should've used the word "alleged" when describing the "heinous act."

"Should we have toned that message down slightly?" he said, "Maybe we should have."

Phelps said he made the statement in the highly charged environment of recent days.

Wallace has been in the spotlight this month for his successful push to get the Confederate battle flag banned from NASCAR events – a move motivated, in large part, by the nationwide protests after the police killing of George Floyd in late May. At Talladega last weekend, supporters of the flag demonstrated outside the track – a procession of cars and trucks flew the flag while a plane overhead pulled a huge Confederate flag and a banner reading "Defund NASCAR."

Phelps hopes the investigation results don't diminish the impact of what happened before Monday's Talladega race, when fellow drivers, their teams and NASCAR officials joined together in a slow procession down the track's pit road in a show of solidarity with Wallace.

"The world saw our true colors," Phelps said, "and it made us all incredibly proud."