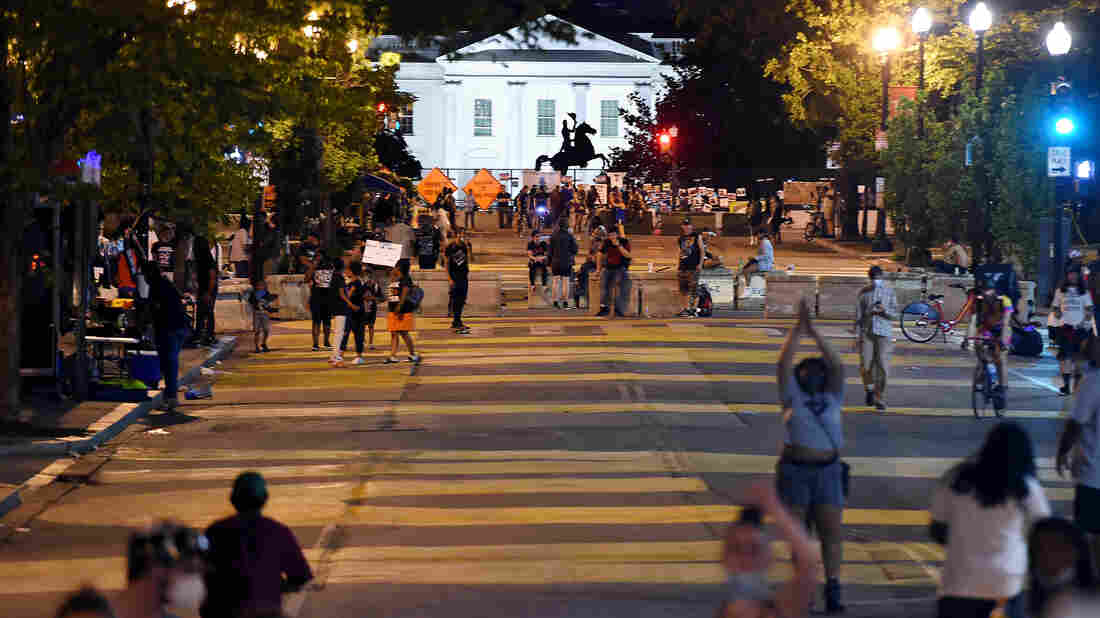 Protesters gather on Friday night at Black Lives Matter Plaza in front of the White House and the statue of former President Andrew Jackson, which is protected by a fence and concrete blocks. Olivier Douliery/AFP via Getty Images hide caption 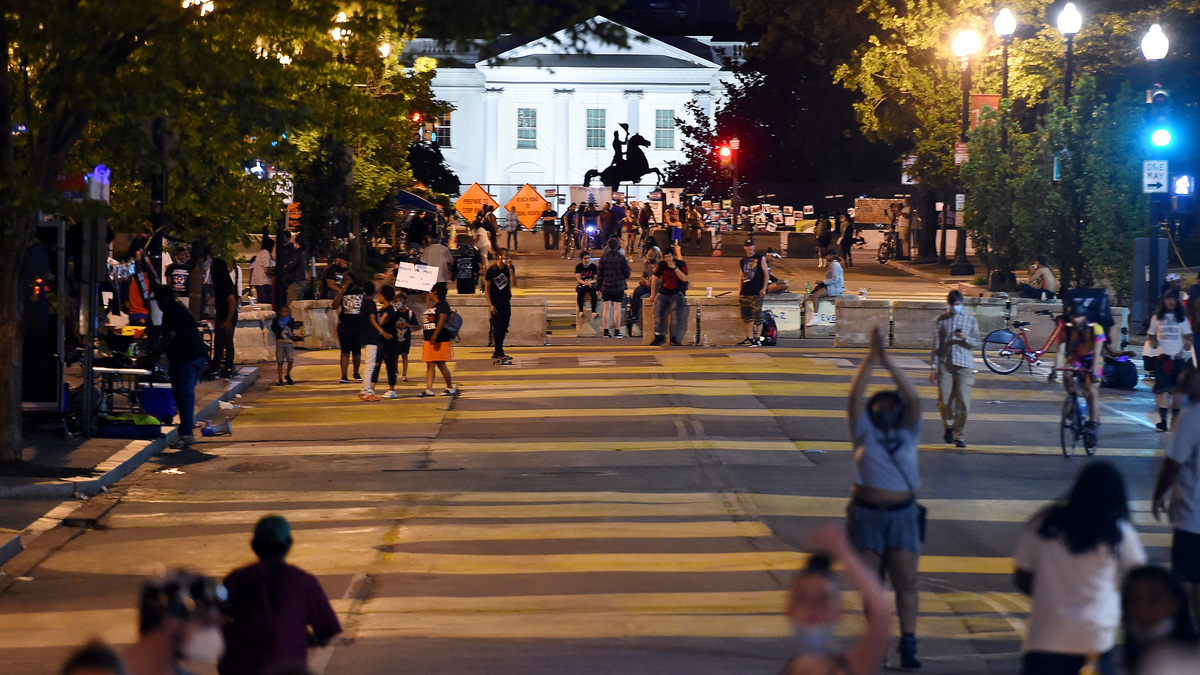 Protesters gather on Friday night at Black Lives Matter Plaza in front of the White House and the statue of former President Andrew Jackson, which is protected by a fence and concrete blocks.

A video shared by President Trump on Twitter Sunday includes a man who appears to be a Trump supporter saying "white power" in response to protesters.

In the video, apparently taken at The Villages, a retirement community in Florida, people wearing Trump shirts and with Trump signs on their golf carts drive by protesters yelling insults at them and about the president.

In one exchange — eight seconds into the two-minute video — a white man holding a sign that says "Make America Sane Again," a reference to Trump's campaign slogan, yells: "Where's your white hood?" In response, a white man driving a golf cart with signs reading "Trump 2020" and "America First" yells back "white power."

Trump retweeted the video, which was shared by an unknown Twitter user, and said, "Thank you to the great people of The Villages. The Radical Left Do Nothing Democrats will Fall in the Fall. Corrupt Joe [Biden] is shot. See you soon!!!"

Seniors from The Villages in Florida protesting against each other: pic.twitter.com/Q3GRJCTjEW

"White power" is a white supremacist slogan, according to the Anti-Defamation League.

Trump retweeted the video before 8 a.m. ET Sunday and deleted his tweet around 11 a.m.

In a statement, Judd Deere, the White House deputy press secretary, did not apologize for the tweet or condemn the racist term but said instead: "President Trump is a big fan of The Villages. He did not hear the one statement made on the video. What he did see was tremendous enthusiasm from his many supporters."

South Carolina's Tim Scott, the only Black Republican senator, called the retweet "indefensible." "He should not have retweeted," Scott said on CNN Sunday.

The president's tweet comes at a time of increased racial tension in America, with the killing of George Floyd, a Black man, in Minneapolis police custody leading to mass protests against police brutality and for racial justice.

In an NPR/PBS NewsHour/Marist poll conducted a week after Floyd's death, two-thirds of Americans said Trump has mostly increased racial tensions in the country.

In a more recent poll, from The New York Times and Siena College, 61% of voters said they disapproved of Trump's handling of race, while just 33% said they approved.

"Today the President shared a video of people shouting 'white power' and said they were 'great.' Just like he did after Charlottesville," Biden, the presumptive Democratic presidential nominee, said in a tweet of his own. "We're in a battle for the soul of the nation — and the President has picked a side. But make no mistake: it's a battle we will win."