Accessibility links
Dungeons & Dragons Moves Away From The Idea Of 'Evil' Races : Live Updates: Protests For Racial Justice The classic role-playing game Dungeons and Dragons has announced changes aimed at correcting racist in-game descriptions — including altering how some mythical races are deemed monstrous and evil. In Dungeons & Dragons, races like orcs and the dark-skinned underground elves known as drow will no longer be inherently evil. Courtesy of Wizards of the Coast hide caption

toggle caption
Courtesy of Wizards of the Coast 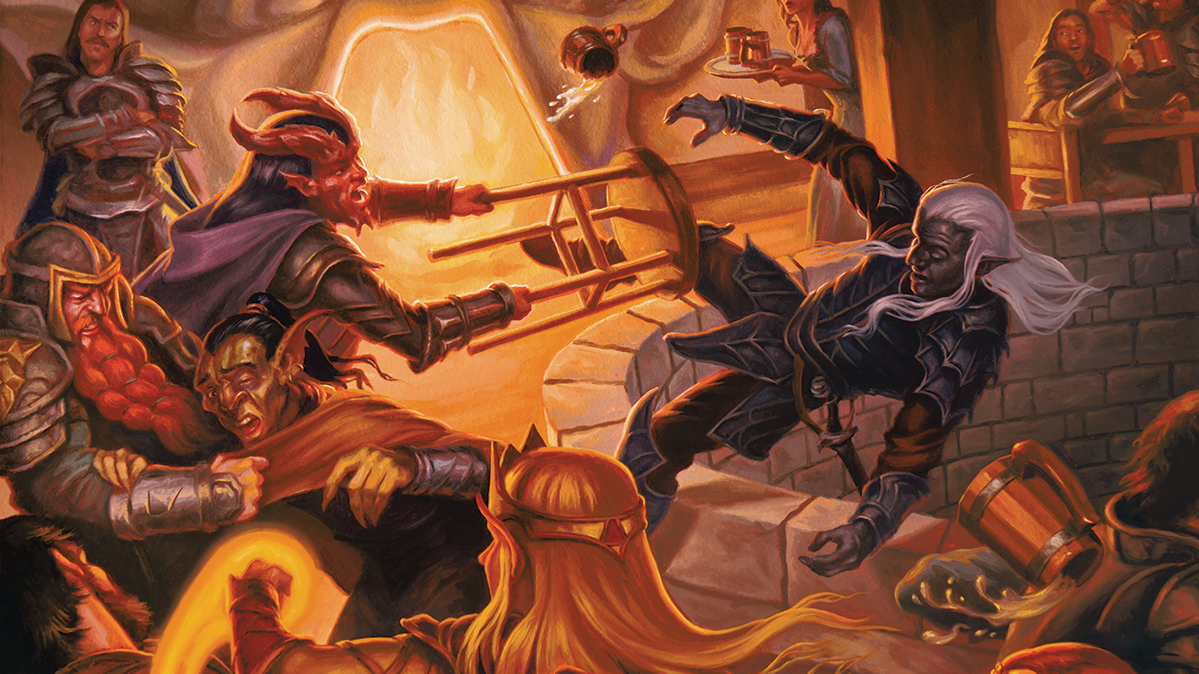 In Dungeons & Dragons, races like orcs and the dark-skinned underground elves known as drow will no longer be inherently evil.

Courtesy of Wizards of the Coast

Dungeons and Dragons is reconsidering what it means to be evil.

The classic role playing game's publisher, Wizards of the Coast, recently announced some changes it was making to the game in response to the ongoing protests over racism and police violence. While this includes editing some past racist descriptions, as well as adding more diverse writers, the game's designers are also making a fundamental change to the way certain playable characters are portrayed.

When you play Dungeons and Dragons — usually referred to as D&D -- one of the first steps is to create a character. They can be a human or an elf or a gnome or some other mythical creature. These classifications each come with their own backstories, as well as their own baggage. While it's generally up to you if your character is good or evil or somewhere in between, historically some of these characters were depicted in a villainous, monstrous light. Orcs were brutish savages. Drow (dark elves that live underground) were dark skinned and inherently evil.

"It is this thing lurking under the surface that really is painful for people who have faced those sorts of stereotypes in the real world," says Jeremy Crawford, the principal rules designer for D&D.

Lauren Frazier is game developer and a massive D&D fan. When she first started getting into the game, and was trying to encourage her Black friends to do the same, she got a certain amount of hesitance.

"It's hard to see yourself in any role playing D&D if you're a person of color — specifically Black and brown people," she says. "A lot of the characters that are black or brown or blue ... they're evil, they're very one dimensional. And D&D is a game about being yourself and being anyone you want to be."

Of course, any good game needs its villains.

The announcement of these changes was met with mixed reviews by the fanbase. The world of tabletop role playing games — like many other communities — is currently figuring out its role in the broader dialogue about racism. Frazier approaches the changes with a cautious optimism, saying that one of the most important things Wizards of the Coast can do is bring on more diverse writers onto its roster.

"They have a staff that's going to read over things for sensitivity and that's great," she says. "But I think you can't polish that out at the last second. I think that the writing itself needs to come from a place of inclusivity and diverse ideas versus just the same stuff that they always write and then have someone go over it with a highlighter to try and fix the racism at the end."