Accessibility links
Three Police Officers Fired Over Photos At Elijah McClain Memorial : Live Updates: Protests For Racial Justice The photos surface after an officer with the Aurora Police Department reported them to the internal affairs unit. The interim police chief calls them reprehensible. 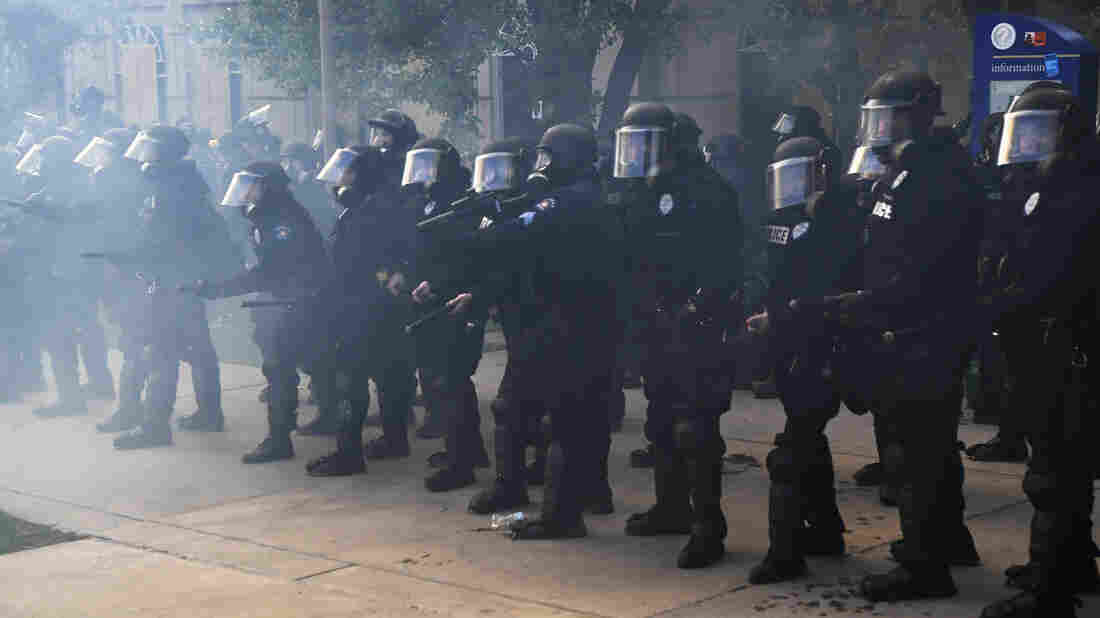 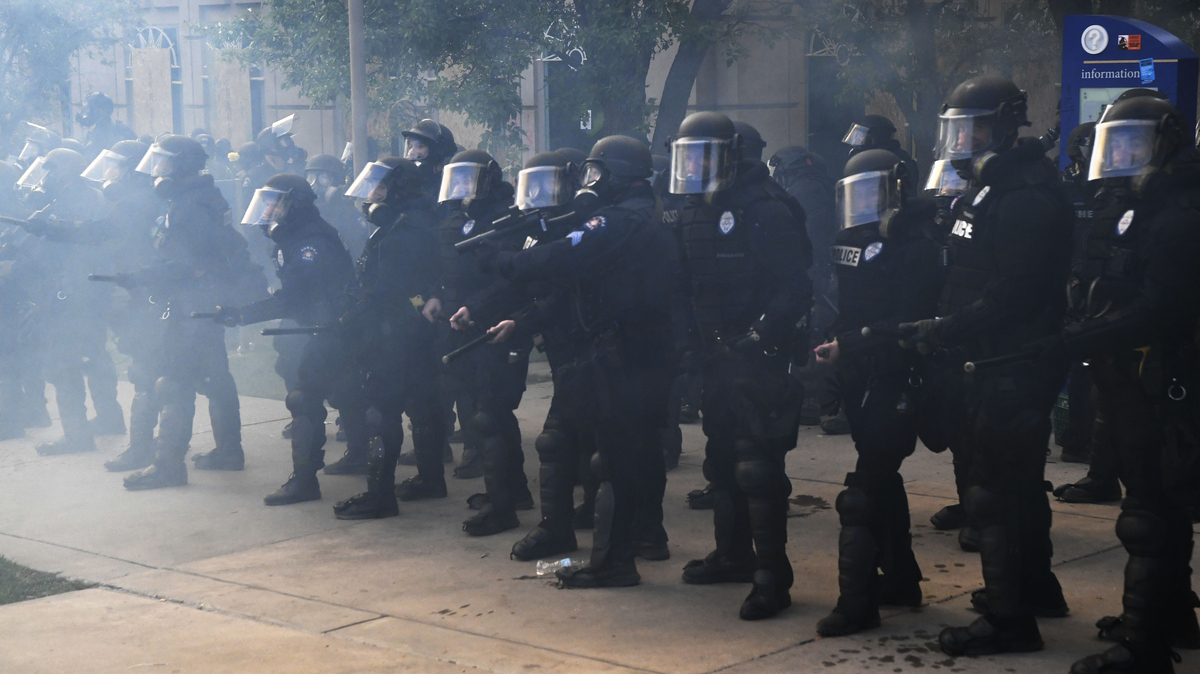 Officers in Aurora, Colo., face off with protesters over Elijah McClain's death outside police headquarters Saturday at the Aurora Municipal Center. The department says it's investigating photos that officers took at a memorial site for McClain, who died in police custody in 2019.

Four Aurora, Colorado police officers have lost their jobs in the continued fallout over the arrest and death of Elijah McClain.

McClain was stopped by police as he walked home from a convenience store last summer. In the ensuing confrontation he was placed in a chokehold by police and later sedated. His death has been compared to that of George Floyd in Minneapolis in May and has prompted outrage and protest.

This week photos surfaced of three police officers near a memorial to McClain. In one, the smiling officers mimicked the chokehold that was used on McClain before his death.

Interim Police Chief Vanessa Wilson told reporters Friday that the officers who took the photos said they were trying to cheer up their fellow officer, who was being investigated in the incident.

Wilson said Jason Rosenblatt, the officer who was sent the photos in a text, had responded "haha."

"It's reprehensible, and that is why they no longer work here," Wilson said, as reported by Colorado Public Radio.

"We are ashamed, we are sickened and we're angry," Wilson added, saying she spoke for the whole police department.

Wilson announced that along with Rosenblatt, two officers who appeared in the photos, Kyle Dittrich and Erica Marrero, have been fired. Another officer in the photos, Jaron Jones, resigned earlier this week.

Investigators have been probing the taking of photographs near the site where McClain was forcibly arrested. The site became a memorial to the 23-year-old who died in police custody. He was not suspected of committing any crime.

Wilson announced the investigation Monday night, saying that when she learned about the photos Thursday, she "immediately ordered Internal Affairs to make this investigation their top priority."

The police union has criticized the investigation of the photo and Rosenblatt's response as rushed. A lawyer for McClain's family, Mari Newman, said the Aurora police have a history of the racism and brutality, and compared the images to photos taken after lynchings.

The photos came to light after an Aurora police officer reported them to the department's internal affairs unit. Summarizing that initial report, Wilson said that "multiple Aurora Police officers were depicted in photographs near the site where Elijah McClain died."

Wilson did not provide further details about the officers or the photos. Reporter Brian Maass of local TV station CBS 4 described the images as showing officers reenacting the carotid restraint hold used on McClain.

#Breaking: multiple sources say 3 @AuroraPD officers under investigation for taking inappropriate photos at a memorial for #ElijahMclain. Aurora PD tells @cbsdenver "An IA is in progress regarding photographs that were taken at that location". Statement coming soon from APD Chief

The police chief released her statement confirming the internal investigation about an hour after Maass tweeted about the photos.

McClain was confronted by police on Aug. 24 after a man who was driving down the same street called 911 and reported someone who looked "sketchy."

At the time, "McClain was walking home from a local convenience store carrying a bottle of iced tea," as NPR's Vanessa Romo has reported. "He was wearing a ski mask and listening to music on the kind of headphones that fit snugly inside the ear."

McClain's family has said he sometimes wore a face mask because he felt cold due to anemia. Police bodycam footage from the encounter shows McClain pleading with the officers, "I was just going home. I don't have a gun. I don't do that stuff. I don't even kill flies. I don't even eat meat."

He is pinned down for several minutes in a carotid hold.

A medic with the Aurora Fire Rescue later injected McClain with ketamine to calm him. McClain was put into an ambulance and suffered cardiac arrest en route to the hospital. He was taken off life support on Aug. 30.

The governor acted after millions of people signed a petition calling for an independent look into McClain's death.

"They murdered him. They are bullies with badges," McClain's mother, Sheneen McClain, said of the Aurora police in an interview with CBS News.

District Attorney Dave Young also declined to file criminal charges, saying that while he might agree with those who say McClain's death was avoidable, he did not believe the evidence and circumstances would support a criminal case.

McClain's death has come under renewed scrutiny in recent weeks as mass protests have focused public outrage over police killings of Blacks and other minorities.

Wilson, the interim chief, said that when the internal investigation into the photos began, the officers involved were switched into "non-enforcement capacities."