Accessibility links
Mississippi Governor Signs Law Removing Confederate Design From State Flag : Live Updates: Protests For Racial Justice The retired flag, which dates to 1894, includes the Confederate battle flag. A commission will propose a new flag, and voters will consider it in November. 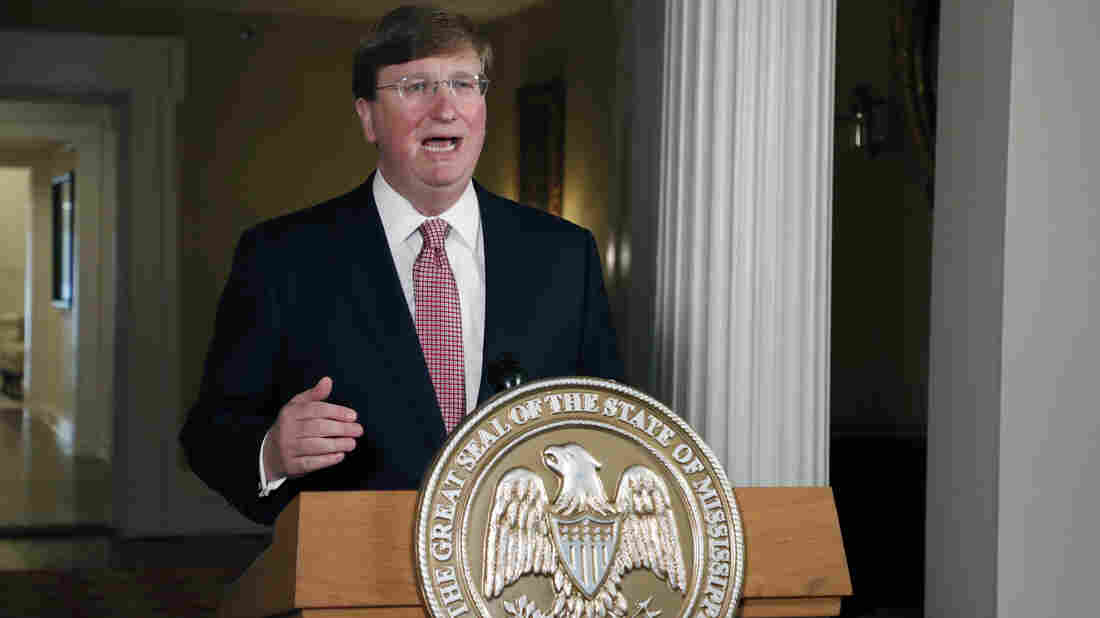 Mississippi Gov. Tate Reeves delivers a televised address prior to signing a bill retiring the last state flag in the U.S. with the Confederate battle emblem, during a ceremony at the Governor's Mansion in Jackson, Miss., on Tuesday. The legislation passed both chambers of the Legislature on Sunday. Rogelio V. Solis/AP hide caption 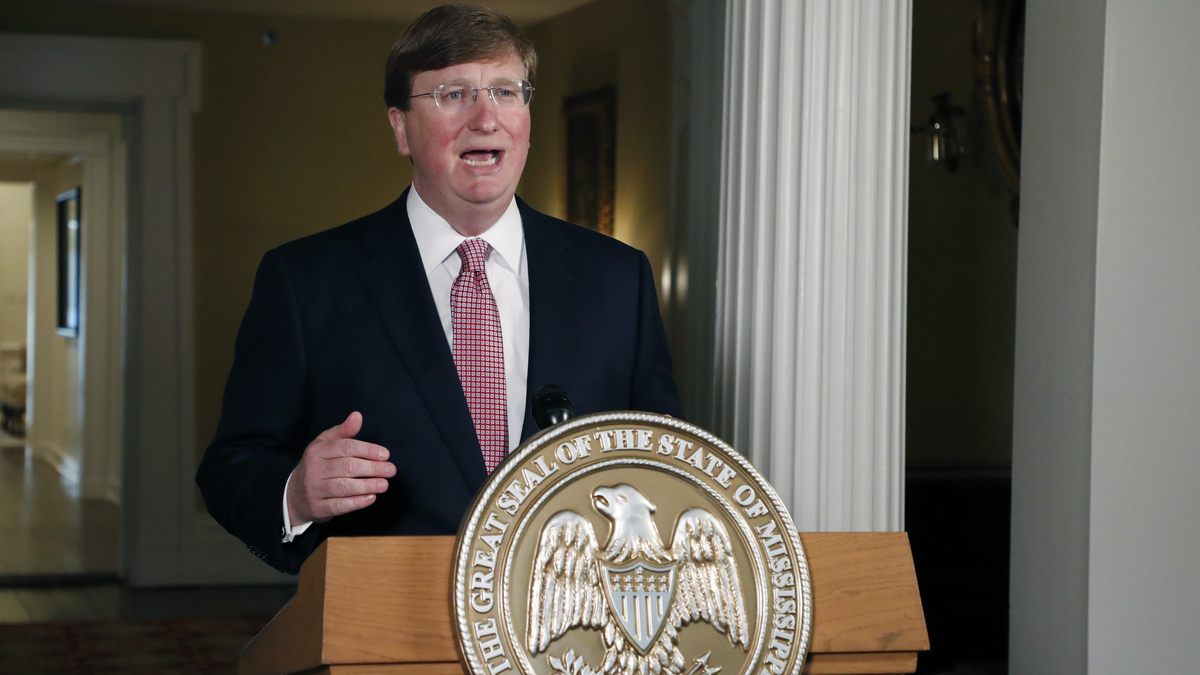 Mississippi Gov. Tate Reeves delivers a televised address prior to signing a bill retiring the last state flag in the U.S. with the Confederate battle emblem, during a ceremony at the Governor's Mansion in Jackson, Miss., on Tuesday. The legislation passed both chambers of the Legislature on Sunday.

After more than 120 years of flying over the state of Mississippi, the Confederate battle flag is no longer a part of the state's official flag.

On Tuesday, Republican Gov. Tate Reeves signed into law a bill fast-tracked by the Mississippi Legislature over the weekend that calls for a new design.

In a somber ceremony, Reeves said he was signing the law to turn a page in Mississippi.

"A flag is a symbol of our present, of our people, and of our future," Reeves said. "For those reasons, we need a new symbol."

Mississippi Black Lawmaker On Taking Down The Flag: A Symbol Of 'Hate And Not Love'

First adopted in 1894 by white supremacists reclaiming power after Reconstruction, the old flag incorporated the Confederate battle emblem – a red background with a blue X lined with 13 white stars.

Since the civil rights movement, activists have been calling for its removal, arguing it's an outdated banner in a state that has a 38% African American population.

But state elected officials had not been willing to go against the nearly 65% of voters who approved keeping the flag in a 2001 referendum.

It finally fell this week amid the outcry for racial justice happening across the U.S., much like Confederate monuments that have come down elsewhere around the South.

"People who wanted to keep the flag couldn't ignore what it meant anymore," says Democratic state Rep. Robert Johnson, the minority leader in the Mississippi House.

He says it makes no sense that it took this long, but he feels a sense of relief.

"You can't live in Mississippi as an African American and don't every day feel angry when you see that flag," Johnson says. "It is like somebody waving a weapon, a gun or a threat at you. And then it represents your ancestors' servitude and slavery."

Johnson says economic pressure helped force the change as it became increasingly clear that the flag was a liability for Mississippi because it's widely seen as a racist symbol. Lawmakers heard from the state's top industries. The NCAA and the Southeastern Conference said they would no longer hold championship games there. Coaches and athletes from Mississippi's universities lobbied the Legislature. And the Southern Baptist Convention said it was time to retire the divisive Confederate imagery.

But moving Mississippi forward will take more than just "taking down a piece of cloth," says Danyelle Holmes with the Mississippi Poor People's Campaign.

"Next, we ask that we get policies as well that will represent the same as the flag — all Mississippians," Holmes says.

"That flag was just a symbol," Holmes says. "But these policy changes will actually be what will set people free."

A commission will design a new state flag that will be put to a popular vote in November. The law calls for it to include the phrase "In God We Trust."

Opponents of the change say they are regrouping, but proud to have prevailed this long.

"That flag was the last holdout," says 74-year-old Joe Abbott with the Sons of Confederate Veterans. He spearheaded an initiative called "Save Our Flag."

"We're putting our heads together to decide which direction we go in," Abbott says. "People have no respect anymore, no respect for each other, don't respect their ancestors."

State Sen. Chris McDaniel led the fight against changing the flag in the Legislature.

"At some point you draw a line in the sand, and you explain to the American left that we are going to either learn to live together or we are not," he said in a Facebook video after the historic vote. "Part of learning to live together is to occasionally be offended by one another."

McDaniel is encouraging his supporters to push for a ballot initiative that would keep the Confederate flag by constitutional amendment.

But the state GOP is behind the change.

"Today is not a day that erases history but a day that faces it and writes its next chapter," Mississippi Republican Party Chairman Lucien Smith said in a statement calling for unity.