Accessibility links
De Blasio On Shifting $1 Billion From NYPD: 'We Think It's The Right Thing To Do' : Live Updates: Protests For Racial Justice The New York City Council passed a new budget overnight. Advocates and the council's speaker say the cuts didn't go far enough, as President Trump says they will "further antagonize" the police. 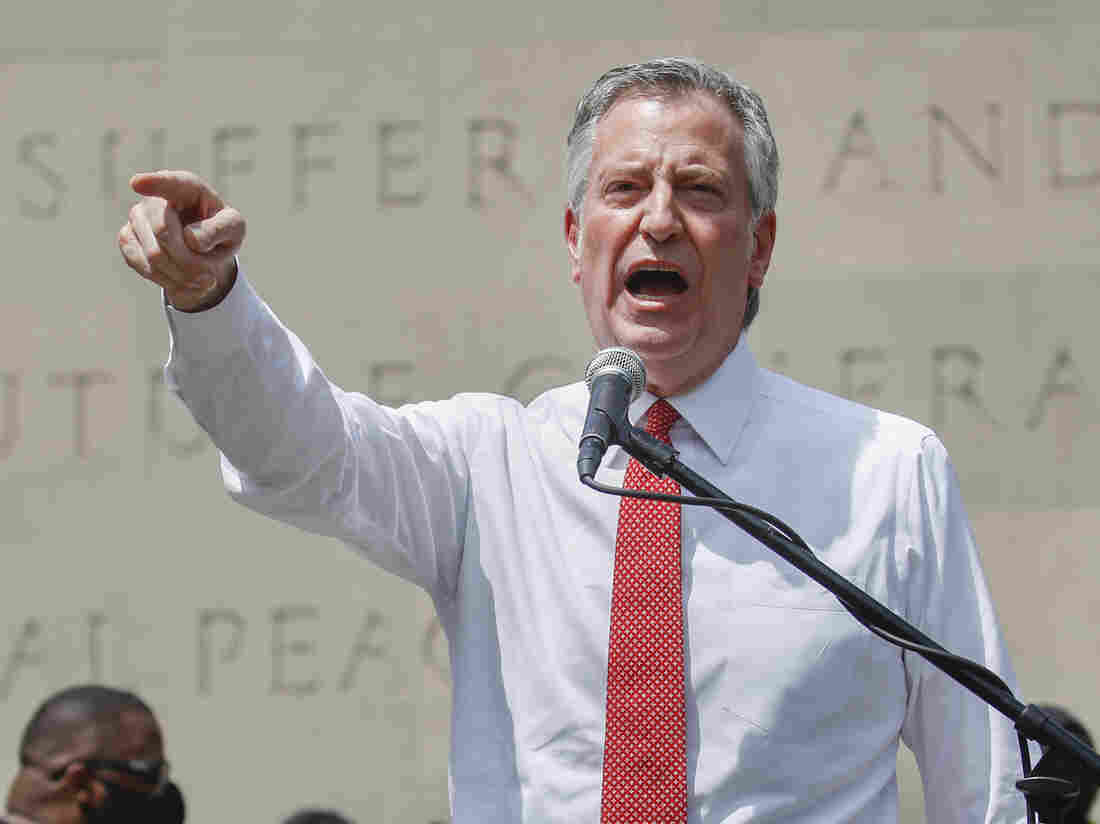 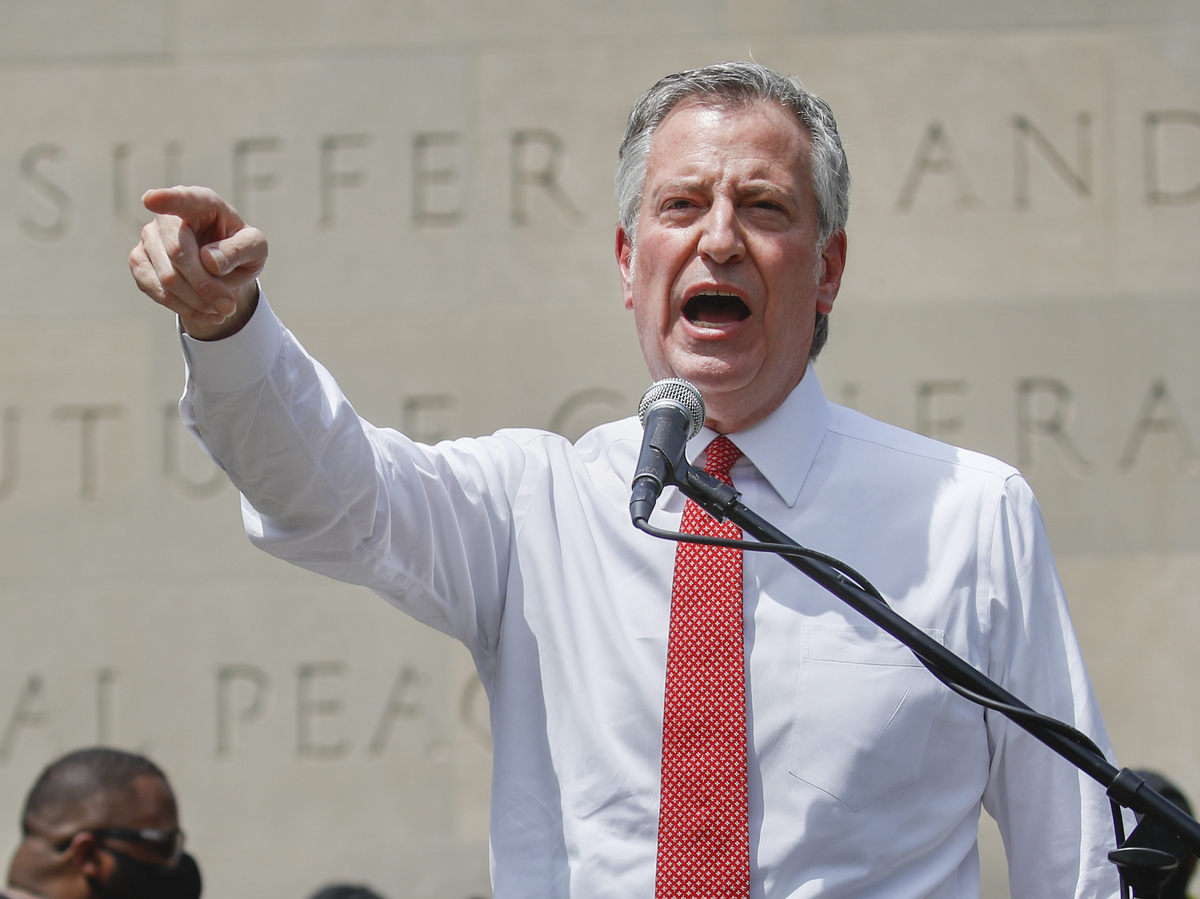 For the past week, the city has seen "defund NYPD" demonstrations, where crowds have gathered at City Hall and outside of the residences of some members of the city council.

"We are reducing the size of our police force by not having the next recruit class. We are reducing our overtime levels. We're shifting functions away from police to civilian agencies," de Blasio said.

"We think it's the right thing to do. It will take work. It will take effort and we're going to be reforming that work in the meantime," he added. 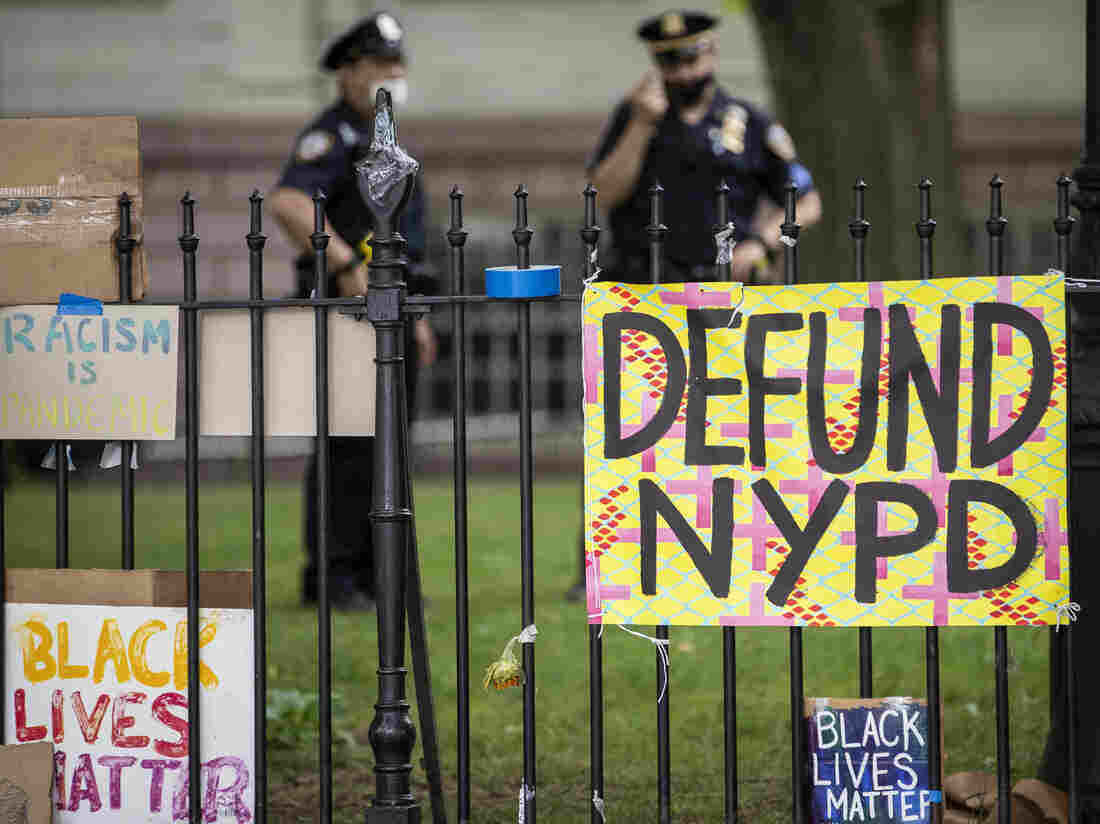 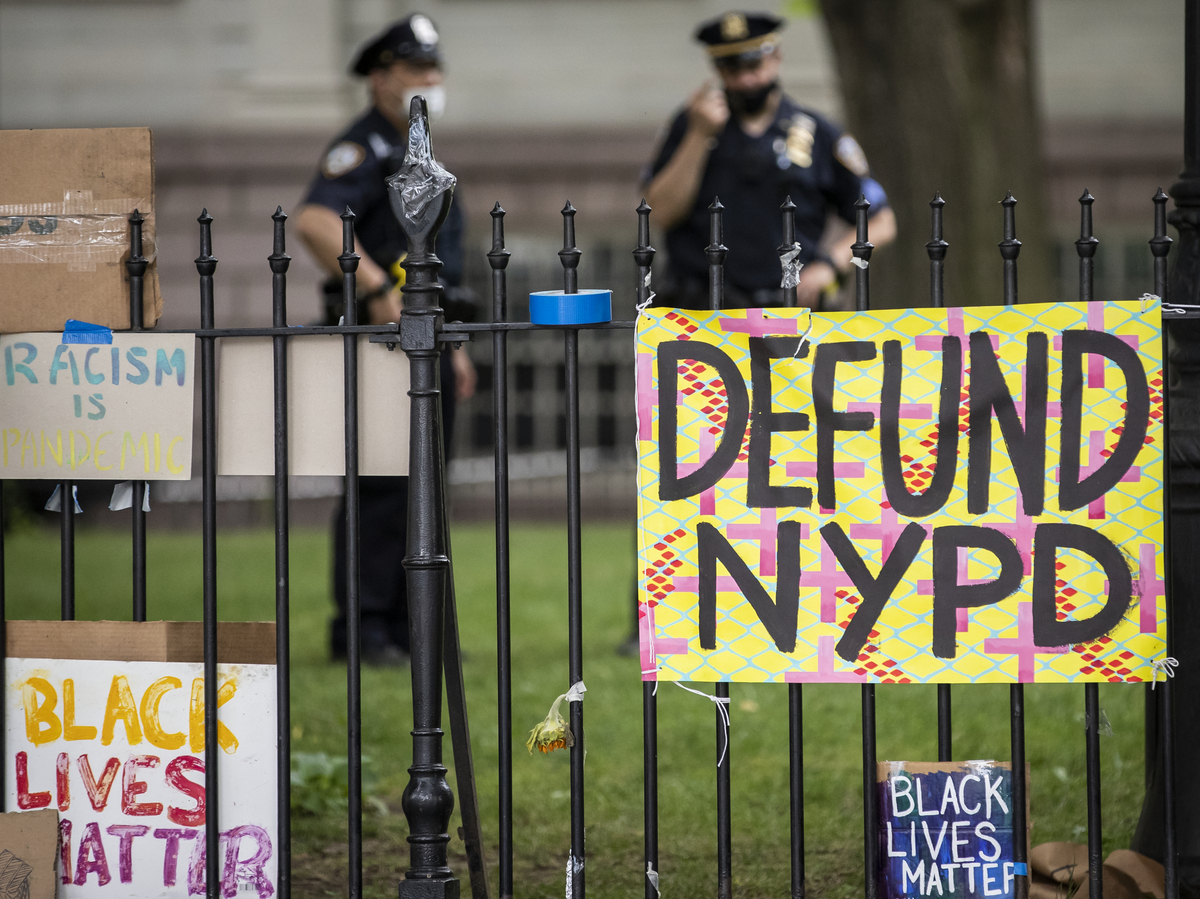 Protesters signs hang on the gate in City Hall Park during the Occupy City Hall protests that say, "Defund NYPD" and "BLM" with NYPD police officers in the background.

The mayor also noted that $500,000 that was earmarked for NYPD major projects will now be redirected to youth centers and expanded access to high speed internet for public housing residents, something he called "a huge reinvestment in communities while we still stay safe as a city."

The president also described the city's plan to paint of "Black Lives Matter" along Fifth Avenue in Manhattan as a "symbol of hate."

NYC is cutting Police $’s by ONE BILLION DOLLARS, and yet the @NYCMayor is going to paint a big, expensive, yellow Black Lives Matter sign on Fifth Avenue, denigrating this luxury Avenue. This will further antagonize New York’s Finest, who LOVE New York & vividly remember the....

During the city council meeting, which started Tuesday and lasted until early Wednesday, members passed the budget in a vote of 32-17.

New York City Council Speaker Corey Johnson disputed that the reductions to the police department actually amounted to $1 billion, "because he didn't consider fringe benefits and other items cited by the mayor to be actual reductions," as WNYC's The Gothamist reported.

"To everyone who is disappointed we did not go farther, I am disappointed as well," Johnson said about the NYPD's budget, the member station reported. "I wanted us to go deeper. I wanted larger headcount reductions, I wanted a real hiring freeze. But this budget process involves the mayor, who is not budging."

The overall fiscal 2021 budget is a reflection of the stark realities brought on by a $9 billion loss in revenue amid the coronavirus pandemic, which forced most the city's economy to shut down in the spring.

The move to cut NYPD's budget follows nationwide protests calling for policing reforms after the killing of George Floyd in Minneapolis in May.

Justice Committee, one of the many advocacy groups calling for defunding of the NYPD, called the budget a "racial and economic justice litmus test." It said that both de Blasio and Johnson "have demonstrated that they don't value Black and Brown lives."

The budget will eliminate two of the usual four new classes of police officers this year, reducing the department's officers by more than 1,100. It also shifts school safety and homeless outreach away from police.

The mayor urged those who say city officials should have gone further to "be more honest in their assessments" of the budget.