Accessibility links
Boston To Remove Statue Depicting Abraham Lincoln With Freed Black Man At His Feet : Live Updates: Protests For Racial Justice Emancipation Memorial has stood in Park Square since 1879. It is a version of the original, in Washington, D.C., which was funded by formerly enslaved people but designed without their input. 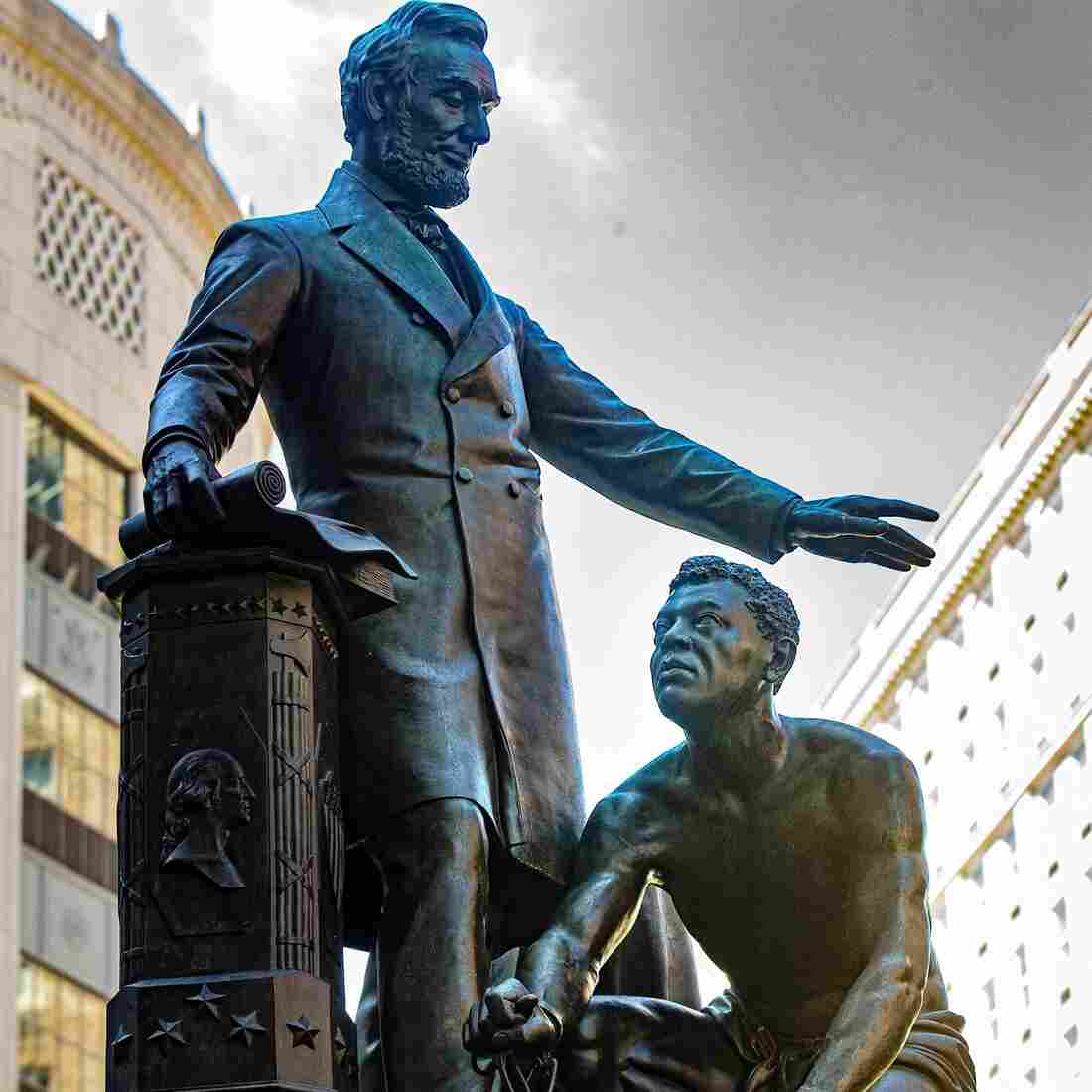 Boston officials have decided to remove the sculpture Emancipation Monument which has stood in Park Square since 1879. It depicts a formerly enslaved man kneeling before Abraham Lincoln. Jesse Costa/WBUR hide caption 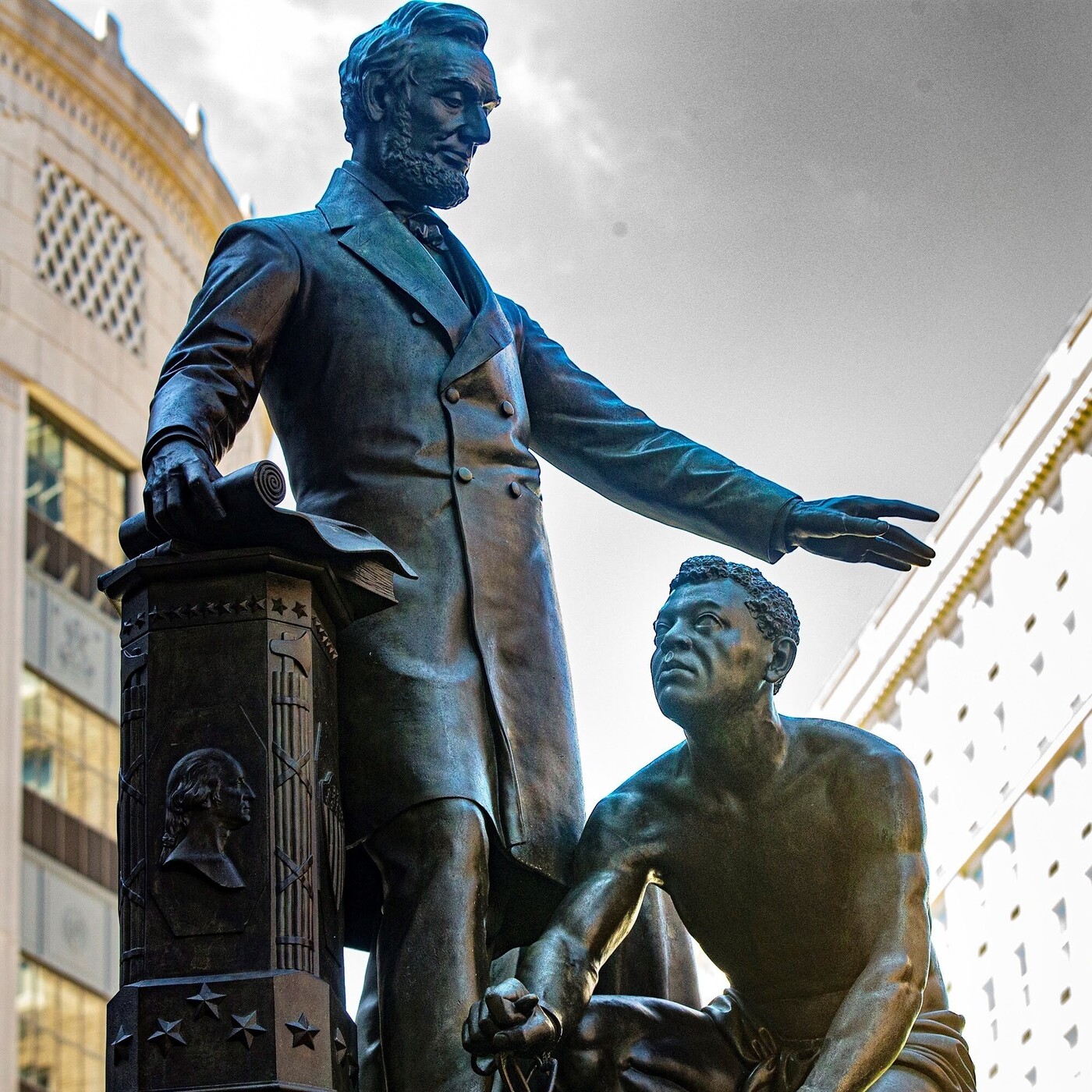 Boston officials have decided to remove the sculpture Emancipation Monument which has stood in Park Square since 1879. It depicts a formerly enslaved man kneeling before Abraham Lincoln.

Members of the Boston Art Commission voted unanimously Tuesday evening to remove Boston's copy of Thomas Ball's sculpture Emancipation Memorial from Park Square. The work depicting a formerly enslaved man at the feet of Abraham Lincoln has stood there since 1879.

As with Confederate memorials around the country, this sculpture has been controversial for years. The original in Washington, D.C., was funded by formerly enslaved people, but designed without their input.

The commission heard nearly two hours of public comment for and against removal.

Boston artist Tory Bullock said the sculpture is a whitewashed portrayal that denigrates an entire group of people.

"This is a frozen picture. This man is kneeling, he will never stand up," Bullock said. "This image is problematic because it feeds into a narrative that Black people need to be led and freed. A narrative that seems very specific to us for some reason. Why is our trauma so glorified?"

A Howard University student and Massachusetts resident named Hannah Bessette called the statue demeaning. "Regardless of what the intentions were," she said, "It is important to note the intentions were white based intentions. As it was a white created statue."

A handful of people who spoke at the meeting were in favor of keeping the sculpture where it is and adding context. But, commission member Robert Freeman said he had changed his mind after listening to two mothers in another recent virtual meeting. They spoke of bringing their sons to see the sculpture. The boys immediately noticed the shirtless Black man with broken shackles on his wrists and ankles.

"And their son said, 'that statue looks like dad. And the other said it looks like me,'" Freeman said. "And then I realized that changing the inscription is not going to change the visual power of what art does. So I have changed my mind. I am for now the removal of the statue to a safe place."

Brandeis University Emeritus Professor Ibrahim Sundiata believes the sculpture belongs in a museum. He's a scholar who's written extensively on West African and African-American history. He grew up in Washington, D.C., and says he used to walk past the statue nearly every day. As a kid, Sundiata said he thought it was creepy.

"I'm for preserving this statue, which troubled my five-year-old mind, my six-year-old mind, and is still in my memory at the same time," Sundiata said. "It needs to have people talk about where the pose came from, why the statue was paid for by freed men, and basically how that pose, those attitudes continue, how this sort of white paternalism informs us."

Commission Vice Chair and artist Ekua Holmes says she imagines the newly emancipated people who funded this sculpture would have chosen different imagery for themselves, if they'd had the choice. Something more aspirational, more self-determining, she said. Something timeless.

"Public art is storytelling at the street level. As such, the imagery should strike the heart and engage the mind," Holmes said. "...What I heard today is that it hurts to look at this piece, and in the Boston landscape we should not have works that bring shame to any groups of people, not only in Boston but across the entire United States."

The city hasn't decided where to store the statue and what will replace it.