Accessibility links
99 Years After The Tulsa Massacre, Excavation Of Potential Mass Grave Begins : Updates: The Fight Against Racial Injustice Tulsa officials have begun a test excavation to determine if land on city-owned Oaklawn Cemetery is the site of a mass grave of victims of the race massacre. Most of the victims have never been found. 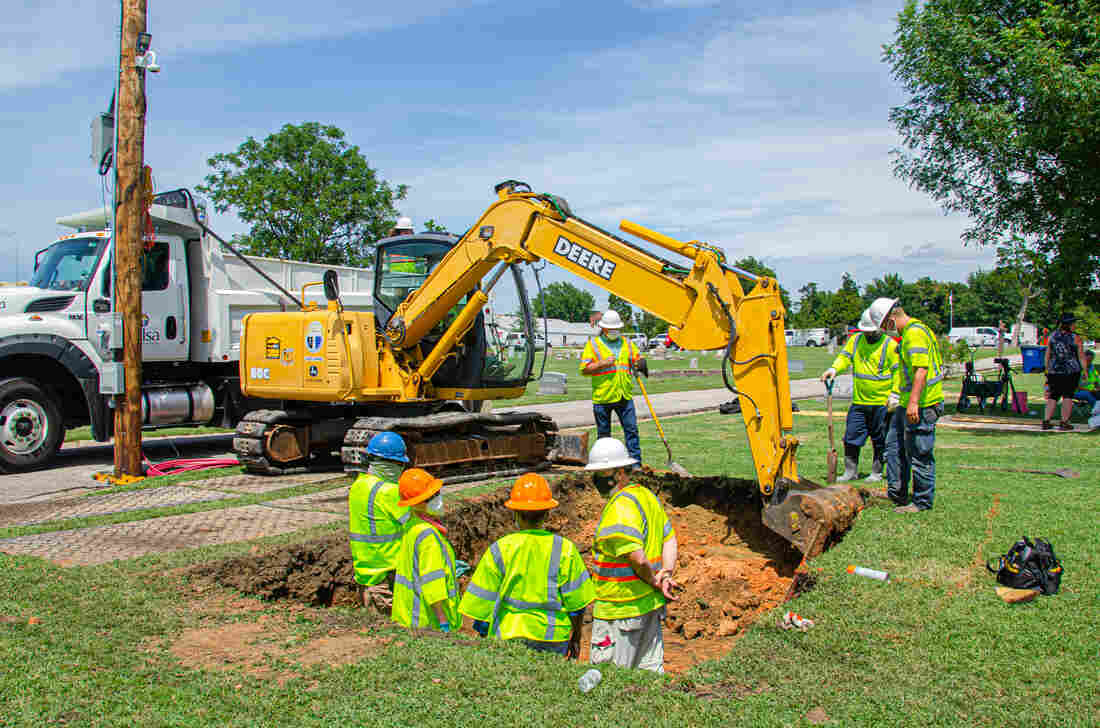 The city of Tulsa, Okla., has begun a test excavation to determine if land on city-owned property is the site of a mass grave from the 1921 Tulsa Race Massacre. 1921 Graves/City of Tulsa hide caption 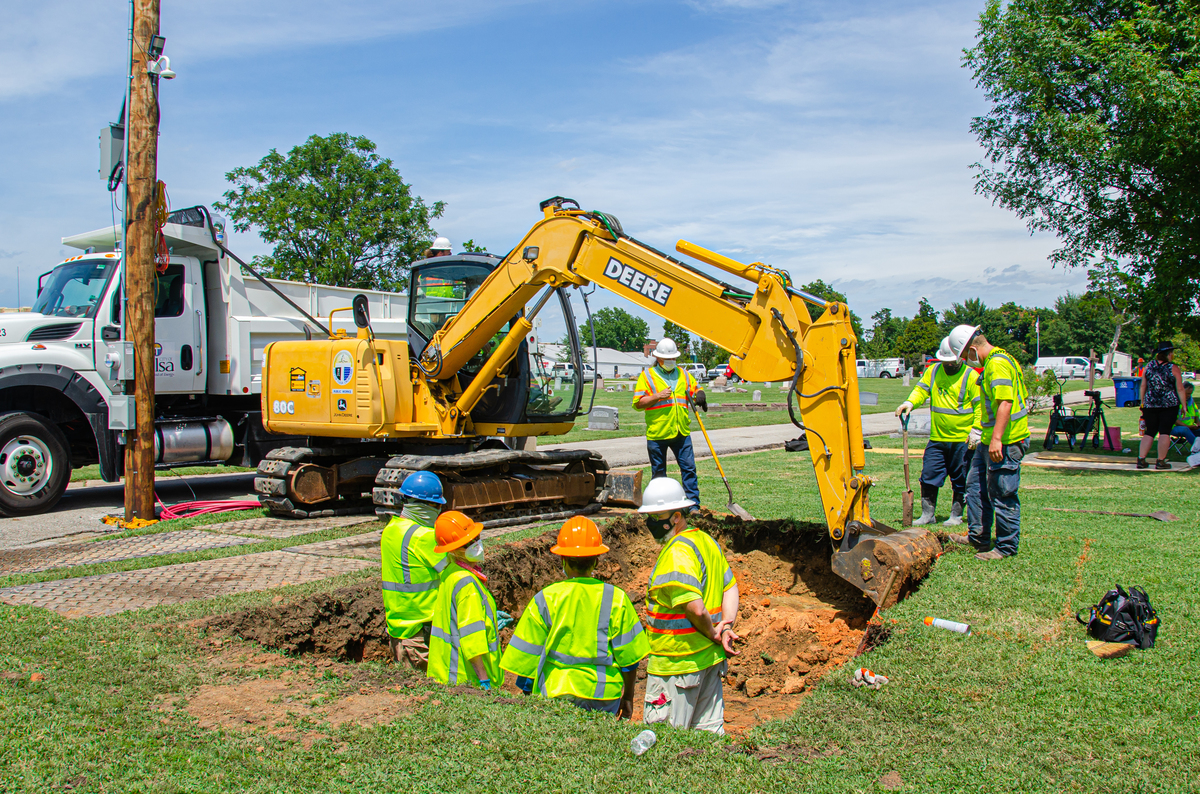 The city of Tulsa, Okla., has begun a test excavation to determine if land on city-owned property is the site of a mass grave from the 1921 Tulsa Race Massacre.

Nearly a century ago, Tulsa, Okla., was the site of one of the most brutal race massacres in U.S. history. As many as 300 African American residents were slaughtered by white mobs, and a section of the city known as Black Wall Street was reduced to ash.

For decades, historians have been trying to determine where most of the victims were buried.

This week, officials began a test excavation to determine if a plot of land on city-owned property is the site of a mass grave. Scientists said last year that by using ground-penetrating radar, they found "anomalies" there that could indicate the existence of an unmarked burial ground.

"Our work continues to find the graves of our fellow Tulsans who went missing during the 1921 Tulsa Race Massacre," Mayor G.T. Bynum said in a Facebook post on Monday, announcing the start of the excavation at the city's Oaklawn Cemetery.

"Because the scan is consistent with a mass grave, a team of some of the foremost researchers in the nation have assembled in Tulsa to assess both the presence and the condition of any human remains at the site in question," he said.

The test excavation is expected to last three to six days. The city is providing a live feed on Facebook where viewers can see the earth being removed.

Tulsa officials said the project was slated to start in March but was delayed because of concerns over the spread of the coronavirus. Now the city is requiring individuals inside the cemetery, including those monitoring the excavation process and archaeologists, to test negative for the coronavirus.

State officials have said that two other areas, Rolling Oaks Memorial Gardens and The Canes, will be examined for potential unmarked burial sites in the coming months.

As NPR reported last year, a group of scientists led by the Oklahoma Archeological Survey discovered a pit at Oaklawn measuring roughly 30 feet by 25 feet. They said it was large enough to fit up to 100 bodies.

"I'm as confident as I can be in the results that this is a very big candidate for something associated with the massacre," Scott Hammerstedt, a senior researcher with the OAS, said during a public forum in December.

There was renewed interest in the Tulsa Race Massacre recently, when President Trump chose the city to be the site of a campaign rally last month — his first since the coronavirus pandemic forced much of the U.S. economy to shut down.

The rally was originally scheduled to be held on Juneteenth — June 19 — a day that commemorates the effective end of slavery in the United States.

Trump changed the date after a torrent of criticism. Some of those critics saw the location and original date of the rally as another affront by the president amid a torrent of pain and anger over the killing of George Floyd, which sparked nationwide protests.

Trump said he eventually changed the date out of respect for the holiday after hearing from his "African American friends and supporters."

Historians trace the spark of the 1921 Tulsa Race Massacre to a confrontation between a young man, who was Black, and a white woman in a downtown Tulsa elevator. The man was accused of assaulting her, a claim that stoked tensions at a time of racial unrest.

Not long afterward, a group of thousands of armed white residents stormed the city's Greenwood district.

"Members of the white mob had looted pawn shops and sporting goods stores for guns to take with them as they flooded into Greenwood," historian Hannibal Johnson told NPR in December. "White mobs prevented firefighters from stopping fires, and some eyewitnesses say planes dropped bombs and strafed the community with gunfire."

When the smoke cleared, an estimated 150 to 300 Black residents had been killed.