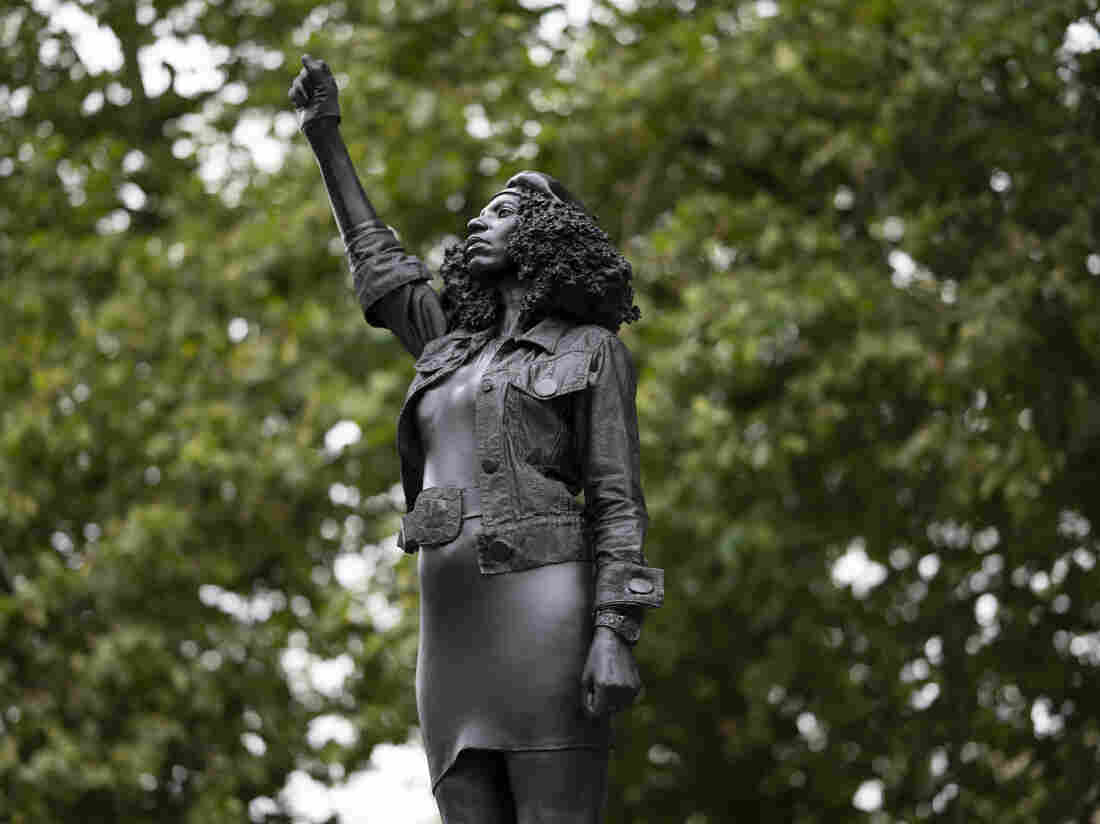 The likeness of Edward Colston, a philanthropist and slave trader, watched over a busy intersection in Bristol for roughly 125 years — until last month, when protesters toppled the controversial statue and tossed it into the British city's harbor.

Now, when passersby glance up, they find an altogether different figure towering over them, with a clenched fist thrust into the sky. A new monument depicting Black Lives Matter protester Jen Reid went up in Colston's place early Wednesday.

"We want to keep highlighting the unacceptable problem of institutionalised and systemic racism that everyone has a duty to face up to," the artist behind the sculpture, Marc Quinn, said in a joint statement with Reid released Wednesday. "This sculpture had to happen in the public realm now: this is not a new issue, but it feels like there's been a global tipping point. It's time for direct action now."

The black resin statue, named A Surge of Power, won't last long on the plinth in Bristol. Quinn and Reid say the artwork is temporary, and Bristol Mayor Marvin Rees said Wednesday that the new statue "will have to be removed."

"The sculpture that has been installed today was the work and decision of a London based artist. It was not requested and permission was not given for it to be installed," the mayor said in a statement of his own.

The city is setting up a process to determine what happens with the plinth. "The people will decide its future," Rees added in a tweet.

The sculpture represents a stark departure from the figure that once occupied the same plinth. Colston's contributions to Bristol around the turn of 18th century earned him a reputation as one of the fathers of the city, honored not only with a monument but also a number of buildings and streets named in his honor.

Those contributions, though, were funded by Colston's involvement in the transatlantic slave trade. For years, the executive was a leader of the Royal African Company, which had a British monopoly on the slave trade from West Africa. The company abducted and sold thousands of people per year to their enslavement in the Americas. Thousands more died on the journey and had their bodies tossed overboard.

That brutal history has made the city's numerous memorials to the man a point of significant controversy in the city for years. In the wake of George Floyd's killing by police in the U.S., anger and outrage once more were trained on Colston's memory — and the statue that overlooked downtown Bristol since 1895.

During a demonstration in June, protesters pulled the statue down using ropes. They then rolled it through the streets to Bristol's harbor, where, with grim historical symbolism, they deposited the bronze body in the water. 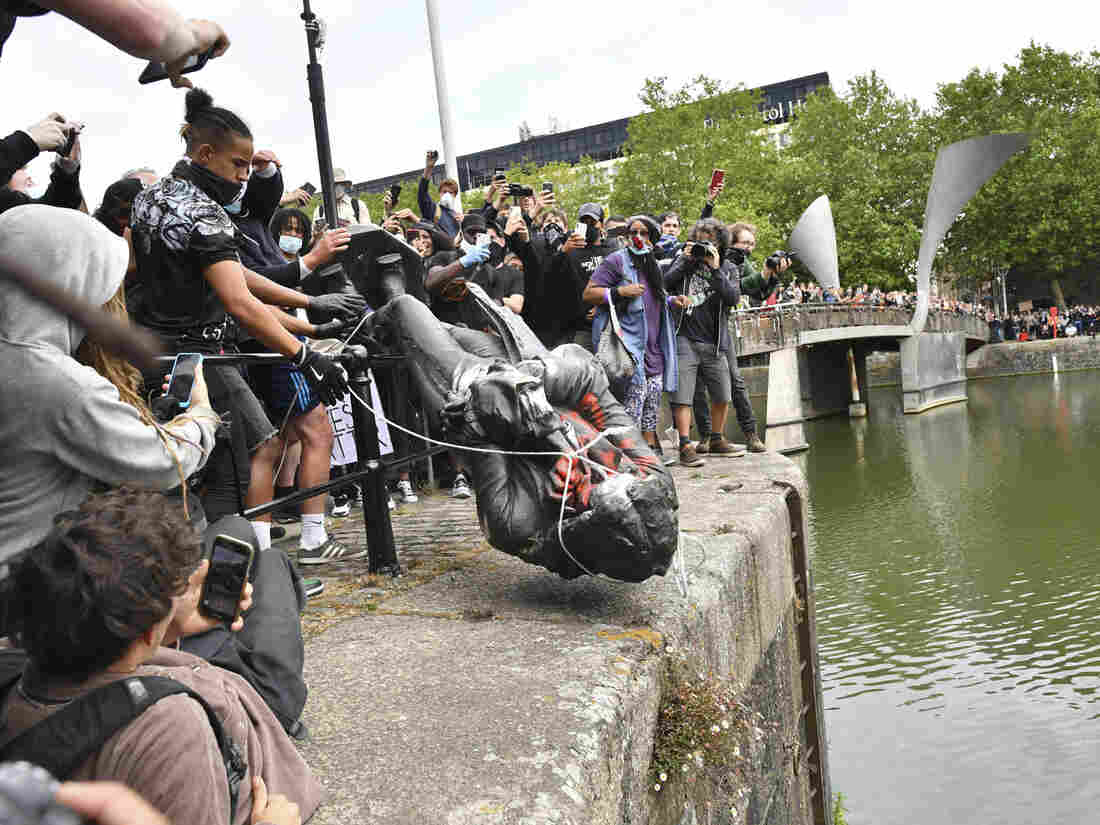 Protesters toss the toppled statue of Edward Colston into the harbor last month in Bristol. The monument to the philanthropist and slave trader had become a flashpoint of protests for racial justice in the U.K. Ben Birchall/AP hide caption 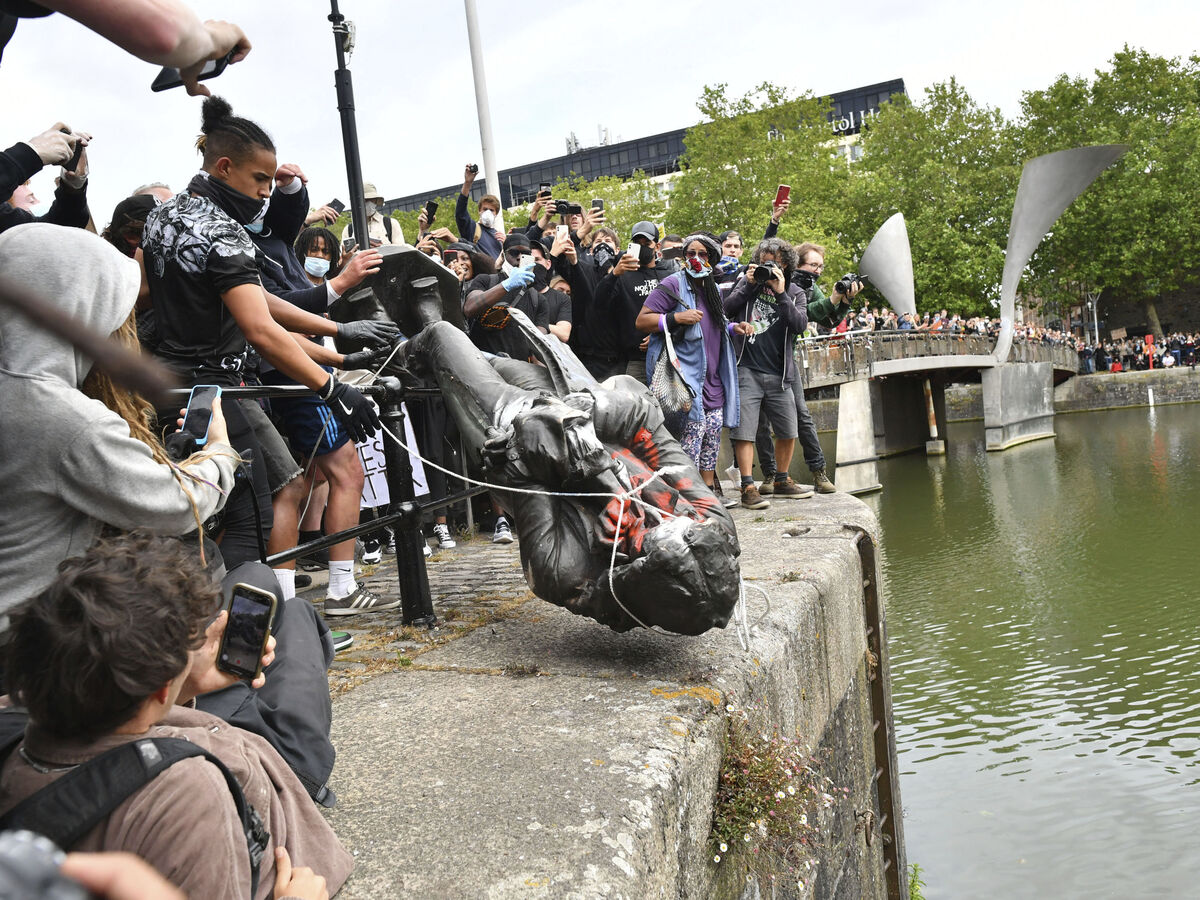 Protesters toss the toppled statue of Edward Colston into the harbor last month in Bristol. The monument to the philanthropist and slave trader had become a flashpoint of protests for racial justice in the U.K.

"Seeing the statue of Edward Colston being thrown into the river felt like a truly historical moment; huge," Reid explained in the statement.

It was that moment, she said, that inspired her to climb the plinth where Colston's statue had stood and deliver a Black Power salute. She said the gesture was spontaneous, "like an electrical charge of power."

"I wanted to give George Floyd power, I wanted to give power to Black people like me who have suffered injustices and inequality," she said. "A surge of power out to them all."

Her gesture was caught on camera and posted to Instagram, where Quinn found it and decided to reach out to Reid. They worked together on the piece.

"This sculpture is about making a stand for my mother, for my daughter, for Black people like me," Reid said. "It's about Black children seeing it up there. It's something to feel proud of, to have a sense of belonging, because we actually do belong here and we're not going anywhere."