Accessibility links
Asheville, N.C., Approves Steps Toward Reparations For Black Residents : Live Updates: Protests For Racial Justice "The blood capital that we have banked to spend today to fight for significant change came ... not from our allies but from Black men, women and children who died," said Councilman Keith Young. 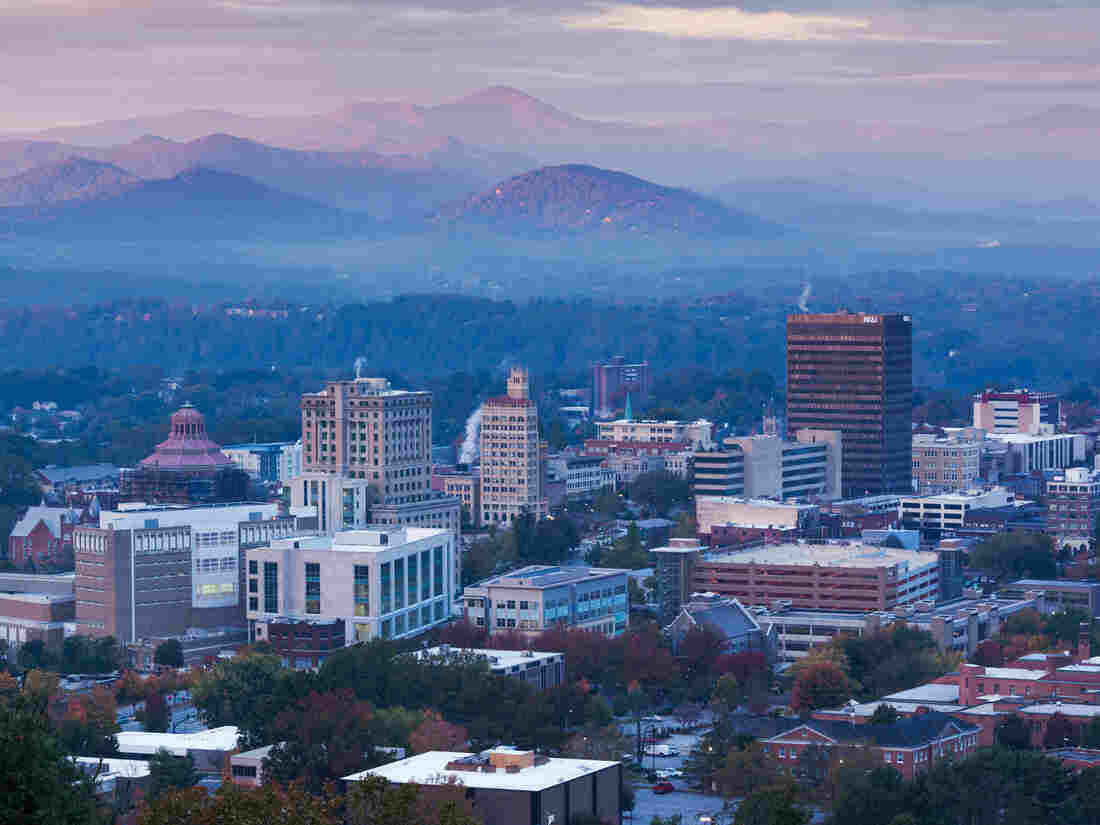 The City Council unanimously approved a resolution apologizing for the local government's historic role in slavery and for participating in racist and discriminatory policies that have led to oppression. Walter Bibikow/Getty Images hide caption The City Council unanimously approved a resolution apologizing for the local government's historic role in slavery and for participating in racist and discriminatory policies that have led to oppression.

In the 1850s and 1860s, white landowners in North Carolina turned to local newspapers to make large purchases, including buying human beings.

An ad in the Asheville News on Aug. 11, 1859, offers a glimpse into what were considered the pertinent details for the commodification of human trafficking and slavery.

"On Friday the 26th of this inst., I will sell ready for cash at the Court House door in Asheville, three very likely Negroes, a woman and two children; — they being the same that I am empowered by a Decree of the Court of Equity to sell as the property of Mrs. Elizabeth Hemphill. The title is all right. And the property is valuable."

The brief notice, with its haunting coda, "And the property is valuable," is a record of the cruel and inhumane history of slavery throughout the south, and specifically in Asheville.

A sin for which the City Council on Tuesday night unanimously voted to repent by taking up the issue of reparations for Black residents.

In a 7-0 decision, the city leadership approved a resolution apologizing for the local government's historic role in slavery and for participating in racist and discriminatory policies that have led to the continued oppression of Black people.

The slave economy and complete subjugation of Black people in Asheville are inextricably linked to the region's financial success and growth. In 1860, on the brink of the Civil War, there were 1,907 enslaved people and 283 slaveowners in Buncombe County at a time when the total population was 12,654, according to records collected by the Buncombe County Public Library system. Only about 111 Black people lived out of bondage.

"The blood capital that we have banked to spend today to fight for significant change came predominantly not from our allies but from Black men, women and children who died," Councilman Keith Young, one of two Black council members and the measure's chief proponent, told NPR.

The resolution also aims to address more recent systemic issues of segregation and exclusion. It says Black people "have been unjustly targeted by law enforcement and criminal justice procedures, incarcerated at disproportionate rates and subsequently excluded from full participation in the benefits of citizenship that include voting, employment, housing and health care."

Consequently, it directs the city manager to develop methods for creating "generational wealth and to boost economic mobility and opportunity in the [Black] community."

Within the next year, the city council commits to convening a commission to examine how to create equity among the city's Black residents on issues including education, public transportation and home ownership.

The reparations will not necessarily include monetary payouts but will require financial investment in a variety of programs, Rob Thomas, a community liaison for the Racial Justice Coalition which led the push for reparations, told NPR.

The resolution is "asking you to look at the facts, and saying, yeah, this happened. ... This many people died. This much money was taken out of the Black community and it would equal this much today," Thomas said.

"We're asking for people to do what is right," he added.

In recent months, protesters across the nation have been demanding that state and local governments take up the issue of reparations following the killing of George Floyd by Minneapolis police on Memorial Day.

Evanston, Ill., Has A Reparations Plan

But even before then, the question of whether municipal leaders have a responsibility to right the wrongs of the past had begun to surface in community meetings. Last November, the City of Evanston, Ill., created the Reparations Fund for its Black residents using cannabis tax revenue.

Alderman Robin Rue Simmons told NPR that the first $10 million in marijuana taxes would be allocated to the fund.

"We still have the impact of redlining in Jim Crow law and the black-lived experience in Evanston today. We have a large and unfortunate gap in wealth, opportunity, education, even life expectancy," Simmons said in an interview with Weekend Edition.

She added: "The fact that we have a $46,000 gap between census tract 8092, which is the historically red-line neighborhood that I live in and was born in [and] the average white household led me to pursue a very radical solution to a problem that we have not been able to solve — reparations."