Accessibility links
Statue Of Protester Is Removed In England, One Day After Replacing Slave Trader : Live Updates: Protests For Racial Justice Officials in Bristol say the artist didn't have approval to erect the work on the plinth where the Edward Colston statue used to stand. The mayor says the search for a replacement will not be rushed.

Statue Of Protester Is Removed In England, One Day After Replacing Slave Trader

Statue Of Protester Is Removed In England, One Day After Replacing Slave Trader 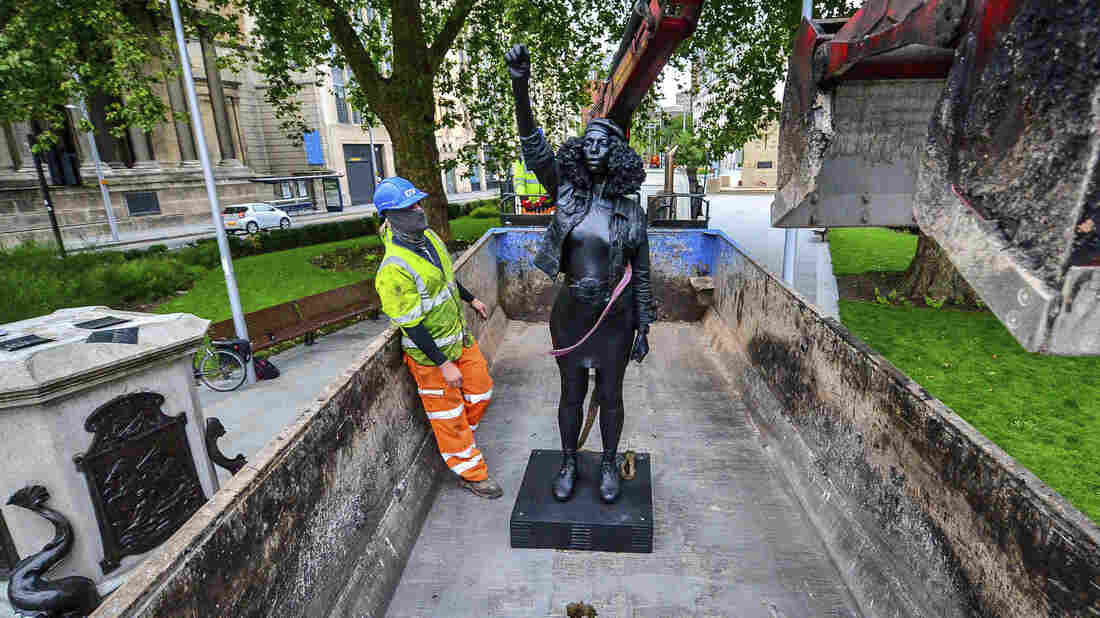 Contractors on Thursday remove Marc Quinn's statue, A Surge of Power (Jen Reid) 2020, after its temporary stint atop the plinth dedicated to slave trader Edward Colston in Bristol. Officials in the British city said the sculpture had been set up without their permission. Ben Birchall/AP hide caption 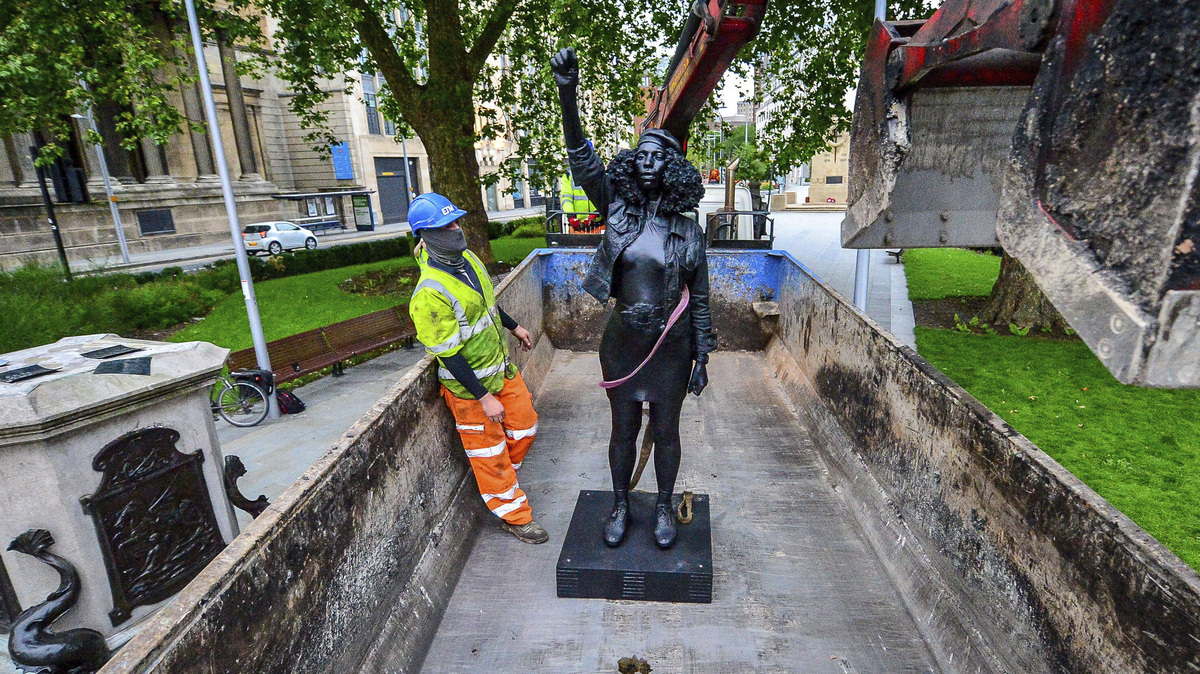 Contractors on Thursday remove Marc Quinn's statue, A Surge of Power (Jen Reid) 2020, after its temporary stint atop the plinth dedicated to slave trader Edward Colston in Bristol. Officials in the British city said the sculpture had been set up without their permission.

Well, that did not last long.

Just over 24 hours after the sculpture of a Black Lives Matter protester went up in Bristol, the British city has pulled it down. Local officials removed artist Marc Quinn's statue of Jen Reid on Thursday morning, ending its brief stint atop a plinth that previously bore the statue of infamous slave trader Edward Colston.

"We're not taking down the statue of a Black Lives Matter protester; we're taking down the work of a London-based artist who erected it without permission and without any conversation with the city," Bristol Mayor Marvin Rees told Sky News on Thursday.

"We've set up a process that we think is really important to make sure that at a very delicate time we include the whole city and make sure everyone feels respected. And it was put up outside of that process and therefore has to come down." 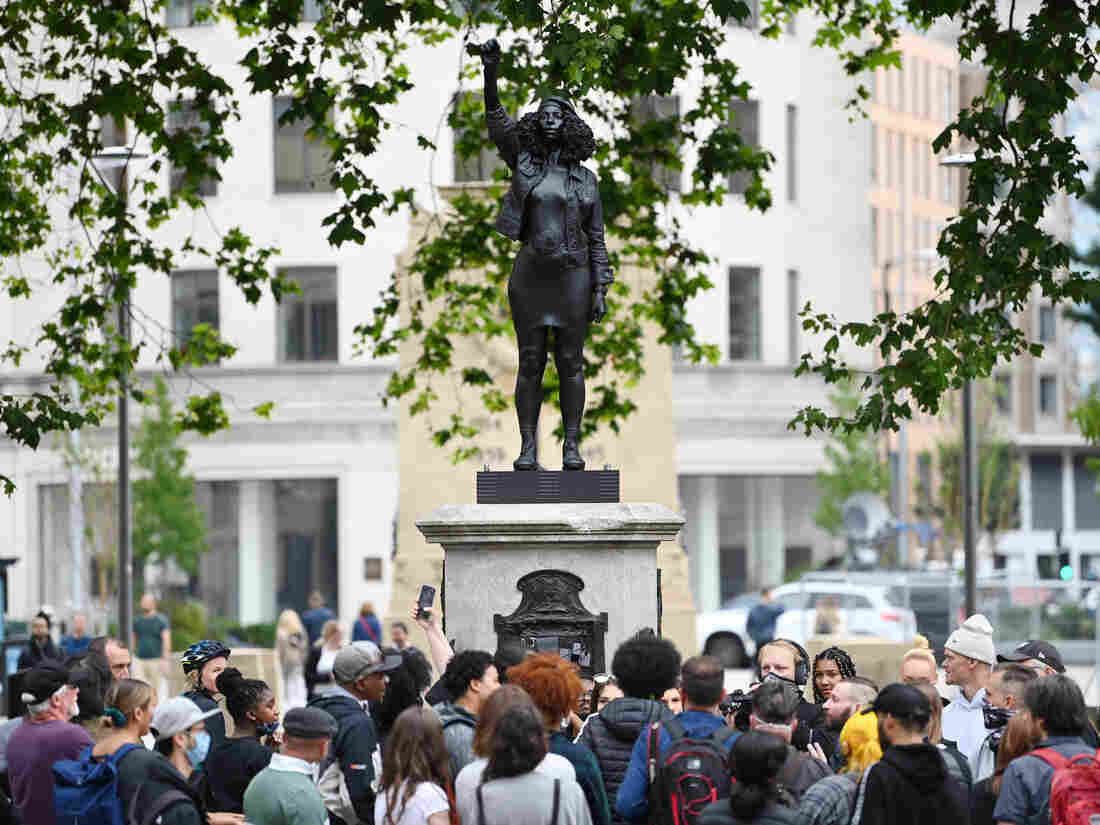 During its daylong stay on the plinth in Bristol, the statue attracted widespread attention and visitors. Matthew Horwood/Getty Images hide caption 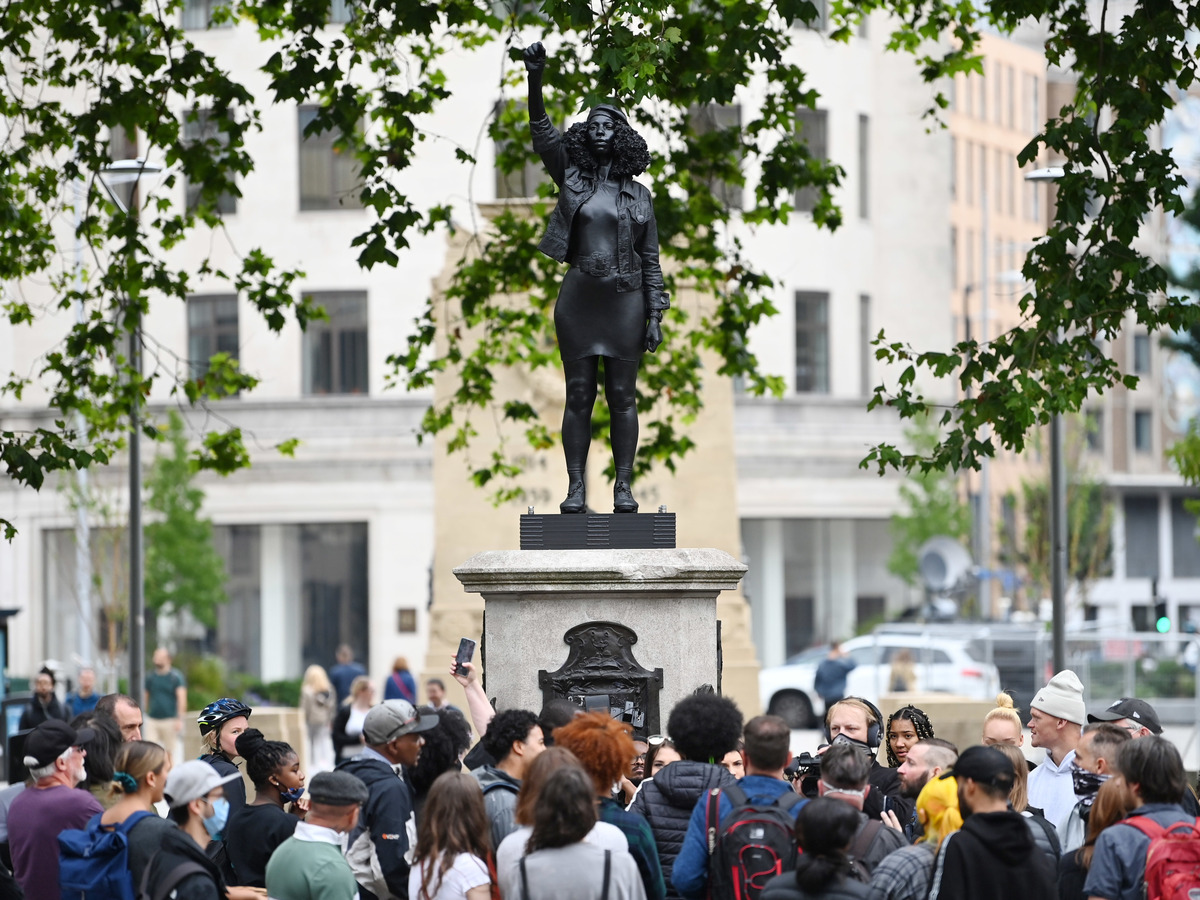 During its daylong stay on the plinth in Bristol, the statue attracted widespread attention and visitors.

The swift move comes as little surprise. Rees made clear Wednesday, when the statue went up, that it was placed without the city's permission. And even Quinn and Reid, in introducing the work, said it was intended to be temporary.

Still, the short-lived statue represents an important chapter in a controversy around Colston that has embroiled the city for years.

For his contributions to Bristol around the turn of the 18th century, the man's name is on buildings and streets throughout Bristol, in addition to a bronze monument that stood on the plinth downtown for some 125 years.

But the money with which he made those contributions came from his work with the Royal African Company, which for years had a British monopoly on the West African slave trade.

The company abducted and sold tens of thousands of people into slavery in the Americas. Thousands of others are believed to have died on the brutal trans-Atlantic journey.

Some Bristol residents have made efforts in recent years to remove the statue in his honor. Last month, demonstrators took matters into their own hands during protests against racial injustice. The protesters toppled the statue and rolled it into the waters of the harbor.

It was then that Reid stepped onto the newly vacated plinth herself and raised a Black Power salute, fist held aloft in a gesture captured on camera. The image caught Quinn's eye and ultimately became the model for the piece the pair collaborated on.

Now, after its daylong turn in the spotlight, the statue has been removed to a local museum. It will be held there "for the artist to collect or donate to our collection," the Bristol City Council tweeted Thursday.

"Our challenge isn't something to be waded into without local understanding or clarity on the outcomes the action is trying to achieve," Rees explained on Twitter. "We don't need to be rushed. We need space to work things out, to maximise the chance we can move forward together."