Accessibility links
Pentagon Chief Effectively Bars Display Of Confederate Battle Flag By U.S. Military : Updates: The Fight Against Racial Injustice Defense Secretary Mark Esper doesn't actually ban the Confederate flag's display. He simply lists the flags that can be shown by the military, and the controversial banner is not on his list. 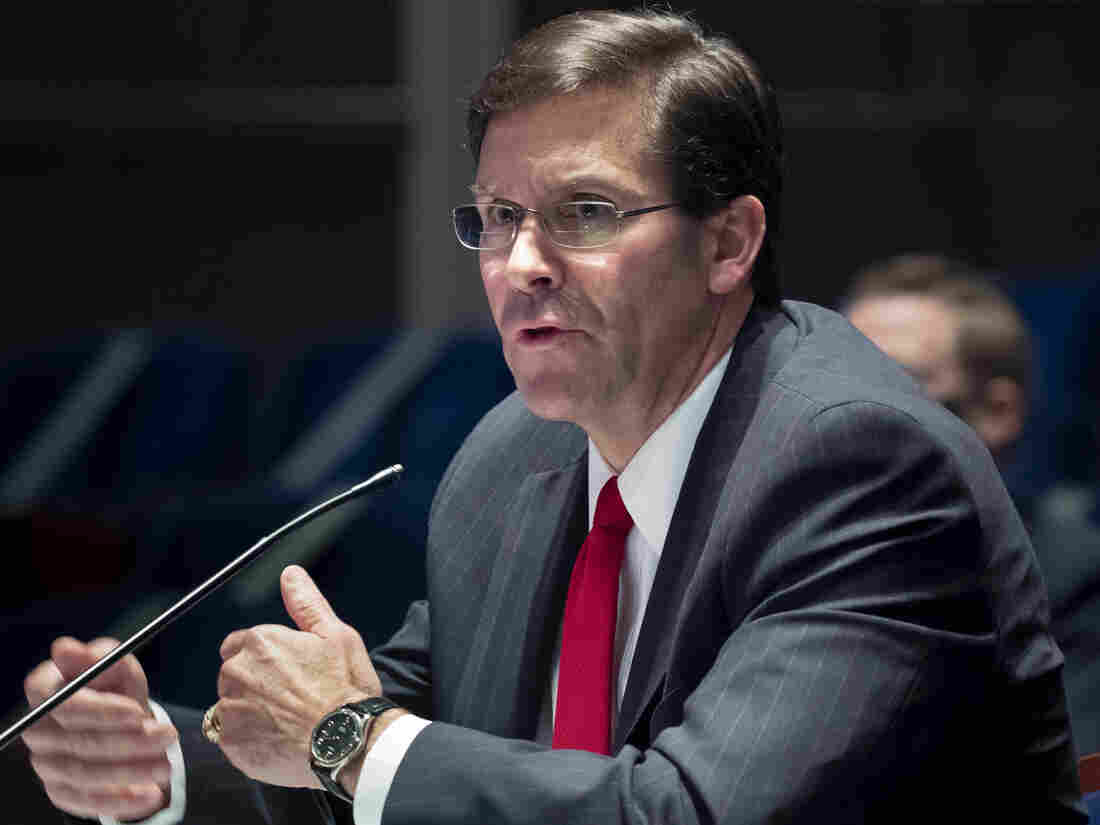 Defense Secretary Mark Esper, shown here last week on Capitol Hill, lists flags that are authorized to be displayed on U.S. military property in a memo Friday. The Confederate battle flag is missing from the list. Michael Reynolds/Pool via AP hide caption 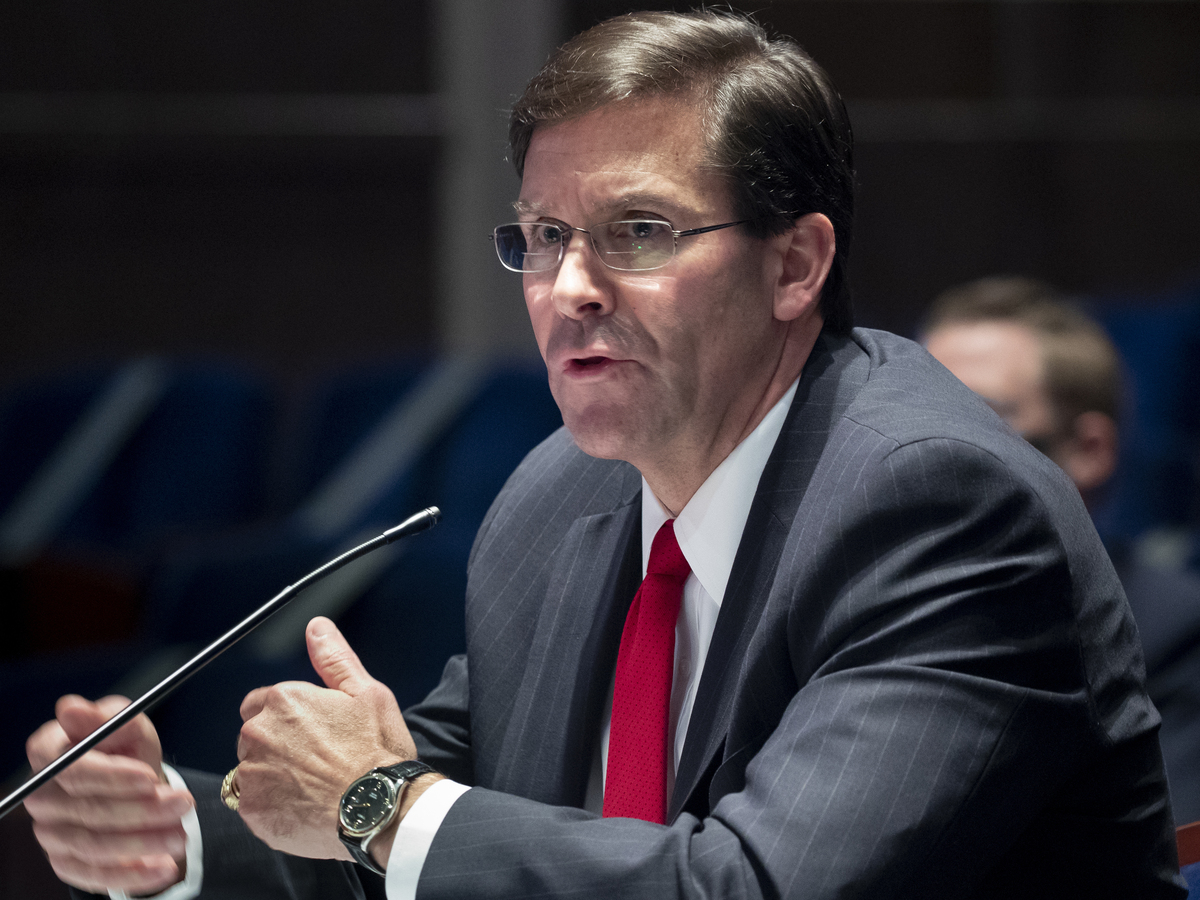 Defense Secretary Mark Esper, shown here last week on Capitol Hill, lists flags that are authorized to be displayed on U.S. military property in a memo Friday. The Confederate battle flag is missing from the list.

Defense Secretary Mark Esper on Friday unveiled a policy change that effectively blocks the public display of the Confederate battle flag at all U.S. military installations without specifically naming that controversial banner.

Esper's announcement follows a lengthy internal debate as well as recent bans on displaying the flag by both the U.S. Marine Corps and U.S. Navy.

In an apparent attempt to avoid the ire of President Trump, who has criticized NASCAR's ban of the Confederate flag, Esper's two-page memo lists the various flags that are now authorized to be displayed on U.S. military property and that "promote unity and esprit de corps."

Conspicuously absent from that list: the Confederate battle flag.

Today I issued a memorandum to the force on the display of flags at @DeptofDefense facilities. With this change in policy, we will further improve the morale, cohesion, and readiness of the force in defense of our great Nation. pic.twitter.com/YQPc3kxf4V

The Associated Press reported that an earlier version of the Pentagon policy memo had specifically banned the Confederate flag.

"The flags we fly must accord with the military imperatives of good order and discipline, treating all our people with dignity and respect, and rejecting divisive symbols," Esper wrote in the memo. "With this change in policy, we will further improve the morale, cohesion, and readiness of the force in defense of our great Nation."

The new policy would not prohibit displays of "unauthorized flags" — which would include the Confederate banner — on state-issued license plates, gravesites, monuments or museum displays, "where the nature of the display or depiction cannot reasonably be viewed as endorsement of the flag by the Department of Defense."

Calls for Pentagon to act

Esper had been under growing pressure from his military commanders to outlaw the symbol of the Confederacy from military installations.

In an April letter to the Marines he commands, Berger made clear his intention to banish the battle flag.

"I have determined it is time to act to exclude from our Corps public displays of the battle flag carried by the Confederate Army during the American Civil War," Berger wrote. "This symbol has shown it has the power to inflame feelings of division. I cannot have that division inside our Corps."

"The Chief of Naval Operations, Adm. Mike Gilday, has directed his staff to begin crafting an order," said Gilday's spokesman, Cmdr. Nate Christensen, "that would prohibit the Confederate battle flag from all public spaces and work areas aboard Navy installations, ships, aircraft and submarines."

The Democrat who chairs the House Armed Services Committee praised Esper's exclusion of the Confederate flag, calling it "a good first step in the right direction as our government and our military grapple with our shared history of racism."

"By omitting the Confederate flag from the list of approved flags," U.S. Rep. Adam Smith of Washington wrote in an email, "the guidance makes clear that there is no place for that symbol in public [Department of Defense] settings, which is an important change in policy that I strongly support."

Esper's directive authorizes the U.S. military to display a broad array of flags, from state and military service flags to those of U.S. allies and the prisoner of war/missing in action flag. In addition to the Confederate standard, the list excludes the rainbow-hued gay pride flag.

"It's absolutely outrageous that Defense Secretary Mark Esper would ban the Pride flag — the very symbol of inclusion and diversity," Modern Military Association of America's Jennifer Dane said in a statement on the website of the group, which calls itself the voice of the LGBTQ military and veteran community. "This decision sends an alarming message to LGBTQ service members, their families and future recruits."

There was no mention in Esper's memo of the 10 U.S. military bases that continue to bear the names of Confederate leaders. Both the House and Senate Armed Services committees have adopted amendments to their respective annual defense policy bills aimed at renaming those bases.

Gen. Mark Milley, who chairs the Joint Chiefs of Staff, told a House panel last week that he would be taking "a hard look" at changing the names of those 10 military installations. He also deplored the Confederates after whom the bases were named.

"My Administration will not even consider the renaming of these Magnificent and Fabled Military Installations," Trump wrote on Twitter. "Our history as the Greatest Nation in the World will not be tampered with."

Esper did not discuss his policy change to exclude Confederate flags from military installations at an hourlong virtual town hall meeting Friday afternoon. He and Milley took questions at the Pentagon from American service members stationed at remote locations.

Neither Esper nor Milley has taken any on-the-record questions from reporters in the last 40 days.