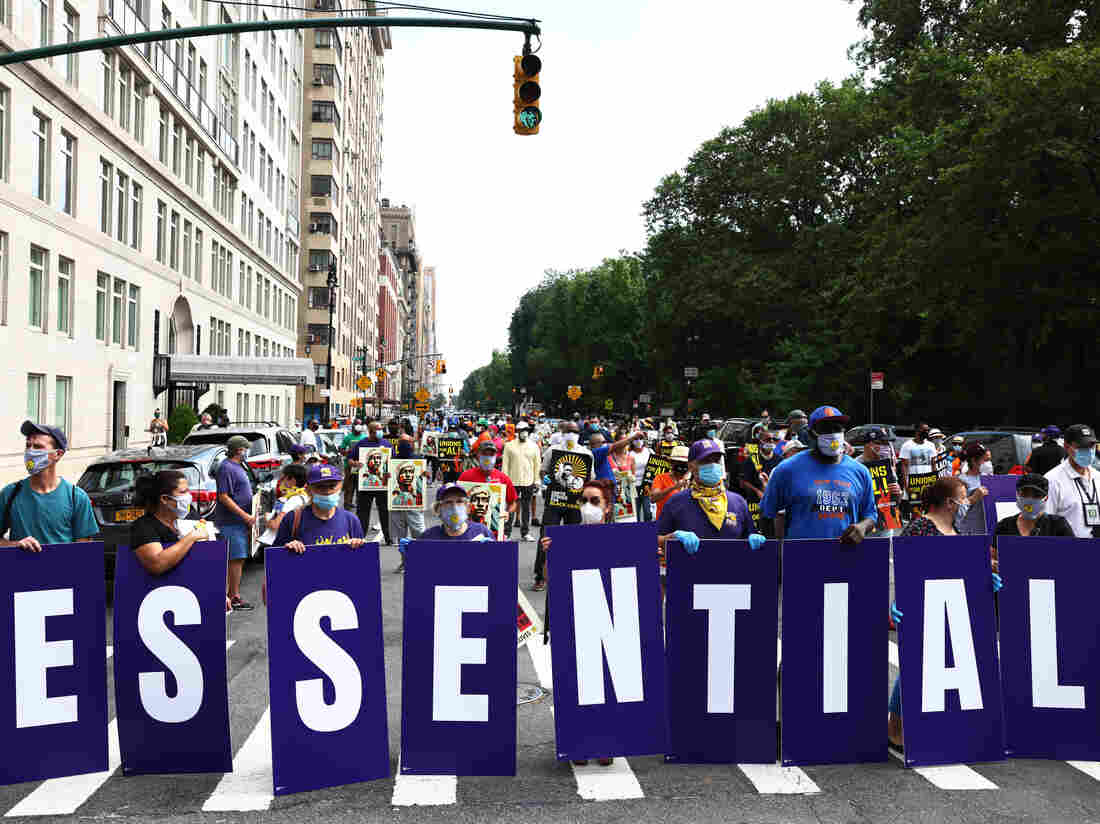 Members of the 32BJ union participate in a "Strike for Black Lives" rally in New York City, one of the many demonstrations for racial and economic justice that took place across the U.S. on Monday. Michael M. Santiago/Getty Images hide caption 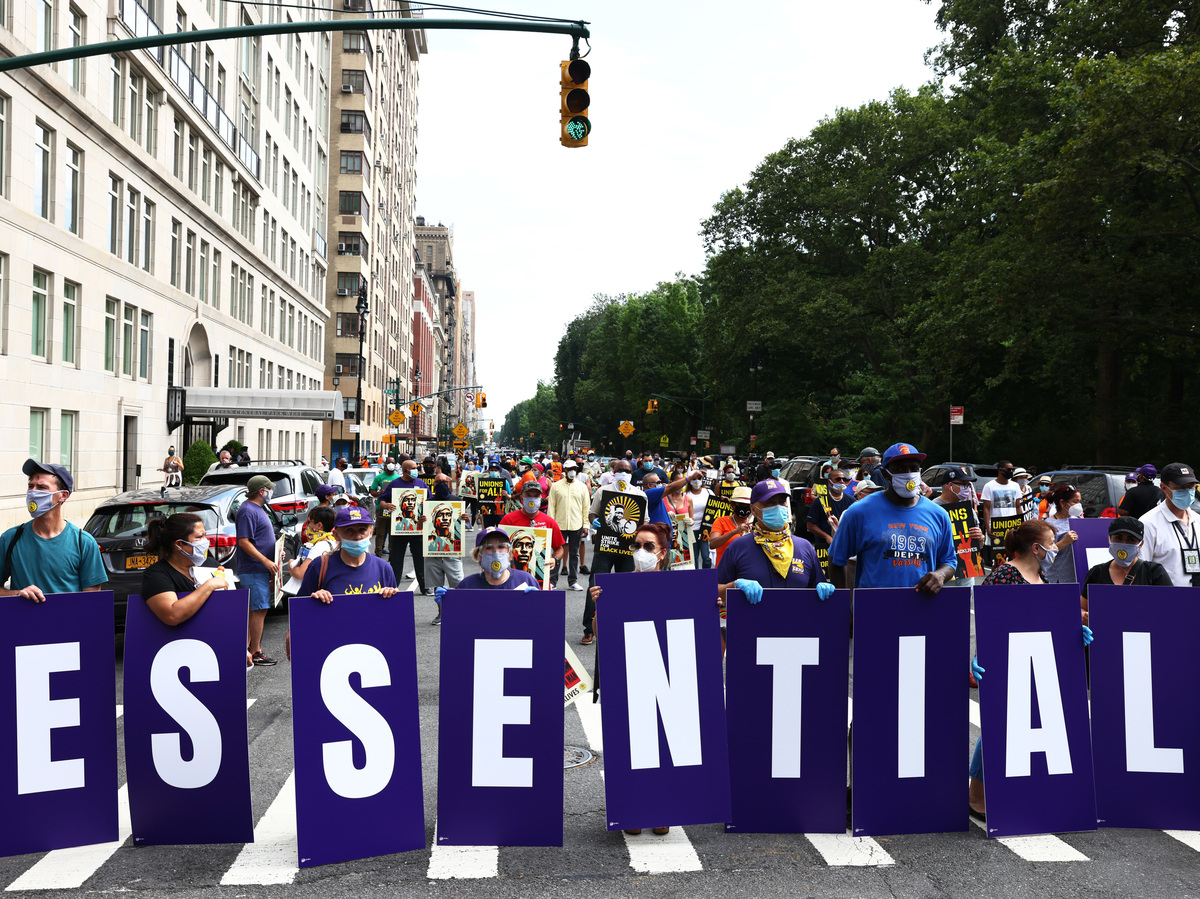 Members of the 32BJ union participate in a "Strike for Black Lives" rally in New York City, one of the many demonstrations for racial and economic justice that took place across the U.S. on Monday.

From Boston to San Francisco, essential workers in cities around the U.S. walked off their jobs and took to the streets Monday to demand racial and economic justice as part of a nationwide "Strike for Black Lives."

The planned day of strikes and protests was organized by 60 different labor unions and racial and social justice organizations, from the International Brotherhood of Teamsters to the Movement for Black Lives to the U.S. Youth Climate Strike Coalition.

Organizers listed four primary demands on their website: "Justice for Black communities, that elected officials use their authority to rewrite the rules so that Black people can thrive, that corporations dismantle racism, white supremacy and economic exploitation including at work and that every worker has the opportunity to join a union."

They also encouraged workers unable to participate for the full day to take a knee, hold a moment of silence or walk off their jobs at noon local time for 8 minutes and 46 seconds in memory of George Floyd and other victims of police violence.

"Even if you can't go on strike or join us in the streets, you can still stand up for Black lives," they said.

'Change Can Happen': Black Families On Racism, Hope And Parenting

According to organizers, tens of thousands of people with front-line jobs in health care, transportation, food services and other sectors staged walkouts and protests throughout the day.

In New York City, essential workers marched in the blazing sun and 100 Teamsters Local 808 building service workers took a knee in honor of Floyd. In Washington, D.C., workers holding signs spelling out "the heroes" gathered outside the Capitol in support of the HEROES Act, the proposed coronavirus relief package.

In Chicago, fast food workers marched to a local McDonald's where multiple workers had tested positive for the virus. Fast food workers in Florida walked off the job. In Durham, N.C., crowds observed a moment of silence before breaking into chants calling for $15 an hour. They also painted "Strike For Black Lives" in block letters on the street.

In Detroit, workers at five nursing homes participated in a walkout to protest low wages and poor working conditions, exacerbated by the coronavirus pandemic. And in San Francisco, 1,500 janitors walked off the job.

"All over the United States, farmworkers, nurses' aides, hotel housekeepers, Uber, delivery, truck and bus drivers, airport cabin cleaners, Amazon warehouse workers, Walmart associates, and more walked off the job to demand an end to police violence against Black people and call on companies to move beyond tweeting that Black Lives Matter and take real action to improve Black lives," organizers said in a release.

A number of Democratic politicians joined in, expressing support in person and through written statements.

Senate Minority Leader Chuck Schumer spoke to crowds outside Trump International Hotel in New York, where he pledged to fight for racial and economic equality and passage of the HEROES Act. Sen. Ed Markey, Rep. Joseph Kennedy III and State Rep. Liz Miranda all spoke at a demonstration outside the Massachusetts State House in Boston.

"Racial inequity touches every aspect of life — from economic justice to environmental justice," Harris wrote. "Dismantling the very systems that lead to these injustices won't be easy, but it is possible."

Mary Kay Henry, president of the Service Employees International Union — which represents nearly 2 million members in the public sector, health care and property services — told Here & Now that essential workers were inspired by the movement for Black lives in response to Floyd's death, and sought to unite the fights for racial and economic justice.

She said they want corporations not just to say they value Black lives, but to show it, such as by paying employees living wages and making sure essential workers have all of the protective equipment they need to safely do their jobs during a pandemic.

Henry cited reports she has heard from SEIU members, positioned on the front lines against the virus, about unsafe working conditions.

"Nursing home workers are still struggling to get personal protective equipment," she said. "Fast food workers are being told to wear doggie diapers instead of being provided masks by their employers when infections occur."

Many of Monday's demonstrations took place outside of McDonald's locations. Employees at a number of locations have accused the company of lacking proper safety precautions, and three Black employees in Florida recently filed a federal civil rights lawsuit against the chain, alleging racial discrimination.

The company said in a statement it has enhanced more than 50 restaurant processes and distributed more than 100 million face masks to improve worker safety.

"We're going on strike because McDonald's and other fast-food companies have failed to protect us in a pandemic that has ravaged Black and brown communities across the country," said Angely Rodriguez Lambert, an Oakland McDonald's worker and leader in the Fight for $15 and a Union. "We're going to keep joining together and speaking out until McDonald's and other companies respond with actions that show they really value our lives."

Henry told Here & Now that the dangers posed by the public health crisis have highlighted the need for a unified fight for racial and economic change, which Monday's widespread demonstrations represent.

"I think it's a historic moment, a new level of intersection between our fights," she said. "The labor movement is owning that until Black communities can thrive, none of us can thrive."