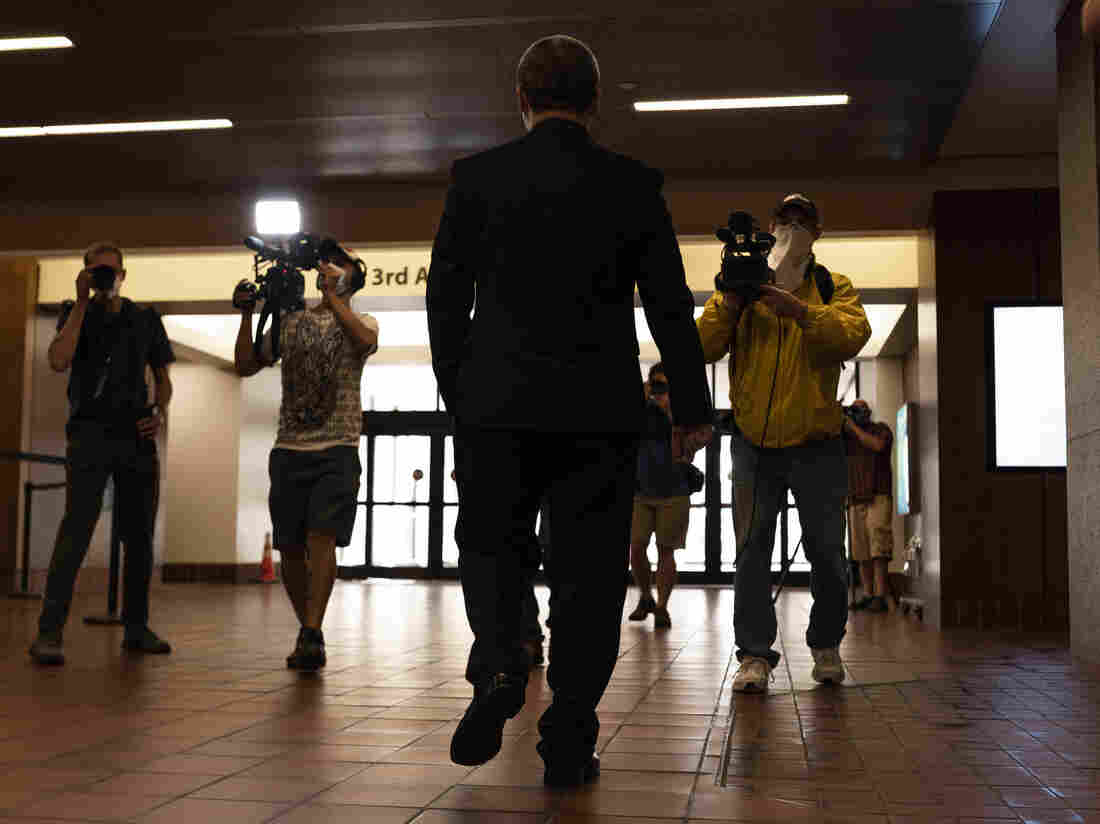 Former Minneapolis Police officer Tou Thao — one of the four ex-officers facing criminal charges in the death of George Floyd — was met by members of the press after a hearing at the Hennepin County Government Center in Minneapolis, at which Judge Peter Cahill lifted a gag order preventing involved parties from speaking publicly about the case. Stephen Maturen/Getty Images hide caption Former Minneapolis Police officer Tou Thao — one of the four ex-officers facing criminal charges in the death of George Floyd — was met by members of the press after a hearing at the Hennepin County Government Center in Minneapolis, at which Judge Peter Cahill lifted a gag order preventing involved parties from speaking publicly about the case.

A Minnesota judge on Tuesday lifted the gag order in the case against four former Minneapolis police officers charged in the death of George Floyd, which sparked nationwide protests and conversations about racial injustice this spring.

Hennepin County District Judge Peter Cahill issued the order, which prevented involved parties from discussing the case publicly, earlier this month after defense attorneys' comments to the press. At the time, he wrote that pretrial publicity would taint the jury pool and could result in an unfair trial.

The order was met with opposition from the defendants' attorneys, as well as a coalition of media organizations.

The attorneys argued that prosecutors and public officials had already made comments that would prejudice potential jurors against their clients.

An attorney for Derek Chauvin — the former officer shown on video kneeling on Floyd's neck for nearly nine minutes — said his client was being called a murderer, and that it would be hard to find pretrial publicity referring to his innocence until proved guilty or actions being justifiable in the line of duty.

"In announcing his ruling, Cahill said he agreed with defense attorneys' arguments that a gag order would be unfair to their clients and limit their ability to defend themselves against negative publicity," the Associated Press reported.

Media organizations also objected to the gag order, on the grounds that it restricted an "incredibly broad array" of speech by involved parties and subjected a "staggering number" of individuals not directly involved in the case to those restrictions.

Last week, attorneys representing a coalition of companies including American Public Media Group; CBS Broadcasting, Inc.; The Associated Press and the New York Times Company asked Cahill to clarify and limit the scope of the order.

They argued that it could be interpreted to limit public comments from a number of tangentially related people, from state and county employees to University of Minnesota System professors.

"George Floyd's death catapulted Black Lives Matter into one of the largest movements in this country's history and spurred important conversations on a number of topics that arguably 'relate' to these prosecutions," they wrote in a court filing.

They also objected to the court's limits on access to body-worn camera footage that had been publicly filed by one of the defendants, and asked the judge to make it available for "copying by the press and public."

Lane's attorney filed police body camera footage of the May 25 incident with the court earlier this month as part of a request to dismiss charges against him. The attorney, Earl Gray, wanted the footage to be made public.

Cahill responded by issuing the gag order and making the video available for viewing only in person and by appointment.

The Media Coalition argued that these limitations are "tantamount" to keeping the footage under seal, and noted that eyewitness video of Floyd's death, as well as transcripts of the body camera footage, are already circulating in public.

They asked the court to make a public copy of the footage available so that "it may be viewed not just by those who have the time and wherewithal to visit the courthouse during a global pandemic but by all members of the public concerned about the administration of justice in one of the most important, and most-watched, cases this State — perhaps this country — has ever seen."

Cahill did not issue a ruling on the motion Tuesday. He said he has 90 days to make a decision but plans to do so sooner than that.

He also ruled that he would not hold Minnesota Attorney General Keith Ellison, lead prosecutor in the case, in contempt of court after two defense attorneys asked him to do so. Cahill said a statement Ellison made in mid-July, about additional attorneys assisting the prosecution, did not violate the gag order.

MPR News reported that defense attorneys did not make statements after the order was lifted.