Accessibility links
Seattle Police Chief On Proposed Budget Cuts And Calls For Reforms : Updates: The Fight Against Racial Injustice The Seattle City Council supports a 50% cut to the police budget. Police Chief Carmen Best says that would be a "reckless maneuver" right now and says many reforms are already underway. 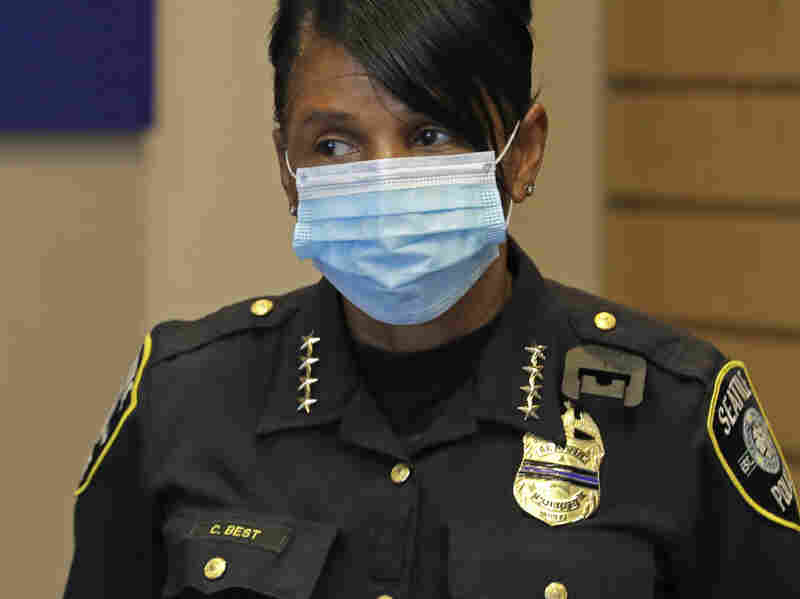 Police Chief Carmen Best listens during a news conference at City Hall in Seattle on July 13. Best is critical of a plan backed by several city council members that seeks to cut the police department's budget in half. Ted S. Warren/AP hide caption 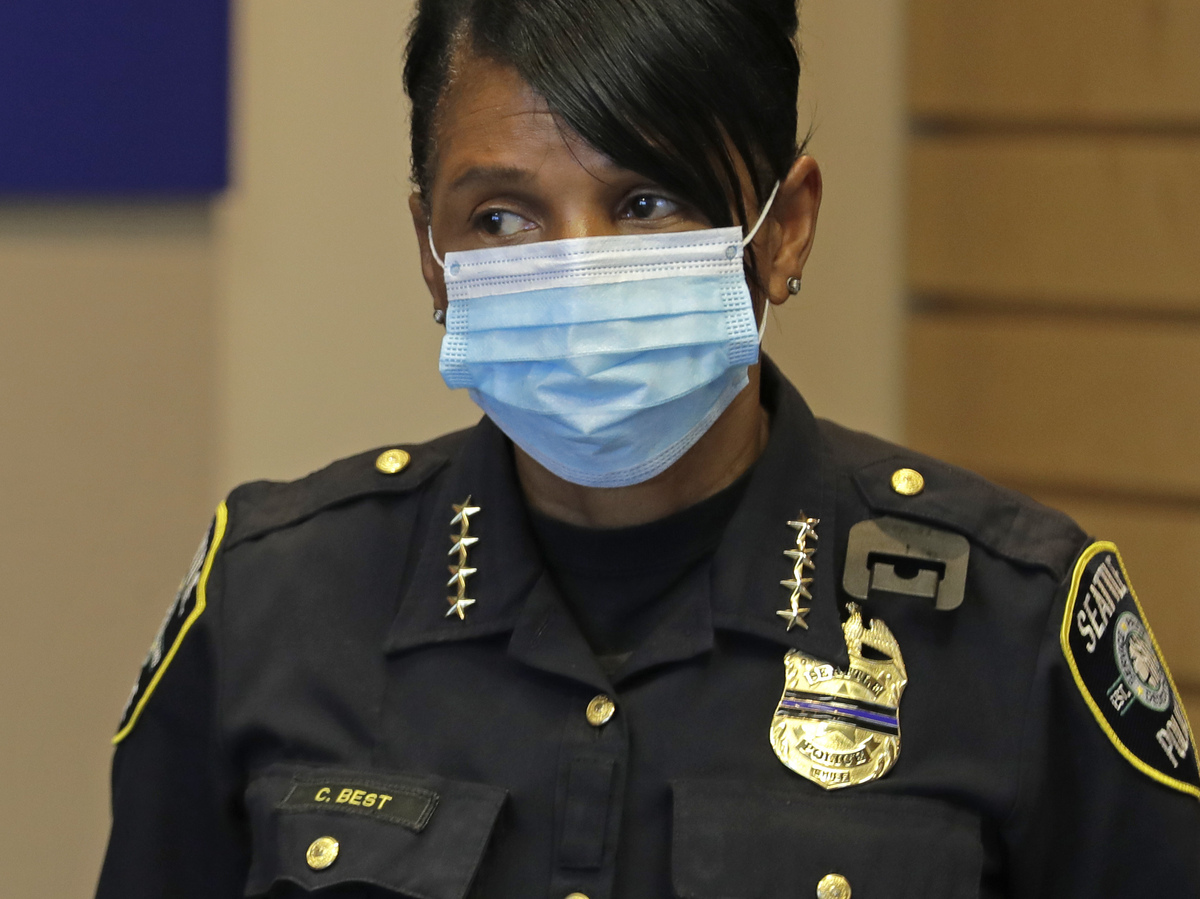 Police Chief Carmen Best listens during a news conference at City Hall in Seattle on July 13. Best is critical of a plan backed by several city council members that seeks to cut the police department's budget in half.

Carmen Best, the chief of the Seattle Police Department, is re-imagining her police force in the middle of ongoing protests against police violence and a global pandemic. She is also facing the possibility that her department's budget could be cut in half.

Seattle has been in the spotlight after activists set up the Capitol Hill Organized Protest zone in early June. On July 1, Seattle Mayor Jenny Durkan issued an emergency order declaring CHOP an "unlawful assembly" and the city dismantled it.

On July 8, a majority of City Council members expressed support for a proposal that would cut the police budget in half by 2021, The Seattle Times reported. And during a budget meeting on July 15, multiple Seattle city council members indicated they would support a 50% cut to the department's remaining 2020 budget, according to The Seattle Times.

Best says there just isn't enough time to implement the right changes to make that possible. "I want to make sure we have the right staffing model that we're able to continue providing public safety to the community that we serve," she told NPR.

Seattle has already been reforming its police department as part of a a federal consent decree the city entered into eight years ago following a Department of Justice investigation into their use of force.

Here are excerpts from her interview on NPR's All Things Considered on Wednesday about potential budget cuts and how she sees her police department shifting in the coming years.

The City Council in Seattle has indicated it would support a 50% cut to your budget. What would be the impact on your force?

I think that the impact would be absolutely detrimental not only for the police department but for the community that we serve. At this point, we are working really hard to make sure that we can maintain adequate levels of staffing and adequate levels of service and cutting, just lopping off 50% of our officers, I would think at this time would be a reckless maneuver and I'm hoping that people will calm down and look at ways that we can have a real plan in place of how we might transfer some of the responsibilities and services to other areas.

It's not clear, though, that this would mean "lopping off" 50% of your officers. One idea is to try shifting money from your department and spending it on alternatives to the current system: take dealing with homelessness out of the hands of the police and send it to other community services. Why not try that?

I think that's a great idea, actually, and we'd love to do that. But what they're talking about, just to be clear, is making that budget cut effective in 2020 and 2021, so it's a pretty immediate response, is what they're looking at. ... The idea, generally, of making sure that we are having adequate resources and a plan in place before that budget takes effect is really important to me.

Do you agree with one of the central demands of protesters that Seattle police, while you've carried out a lot of reforms, haven't reformed enough?

All of that is subjective. Our organization has done everything we were asked to do by the federal judge and the federal monitor to meet all the requirements of the reforms: de-escalation training, crisis intervention training, implicit bias training, force review boards. The things that people are crying out for across the nation as reforms? We've already done it. So in that regard, we're there.

But I have to acknowledge and recognize that there's more to do with the real-time situations that are occurring. Because every time an African American man dies at the hands of injustice, the reforms seem to take a back seat to the consternation.

Noah Caldwell, Meera Venkat and Jolie Myers produced and edited the audio version of this story.