Accessibility links
Portland's Mayor Is Tear-Gassed By Federal Forces On Another Night Of Protests : Live Updates: Protests For Racial Justice "It was not great," Mayor Ted Wheeler said. "It makes your eyes really burn." Protesters rail against federal agents' presence in the city — and repeat their call for Wheeler to resign. 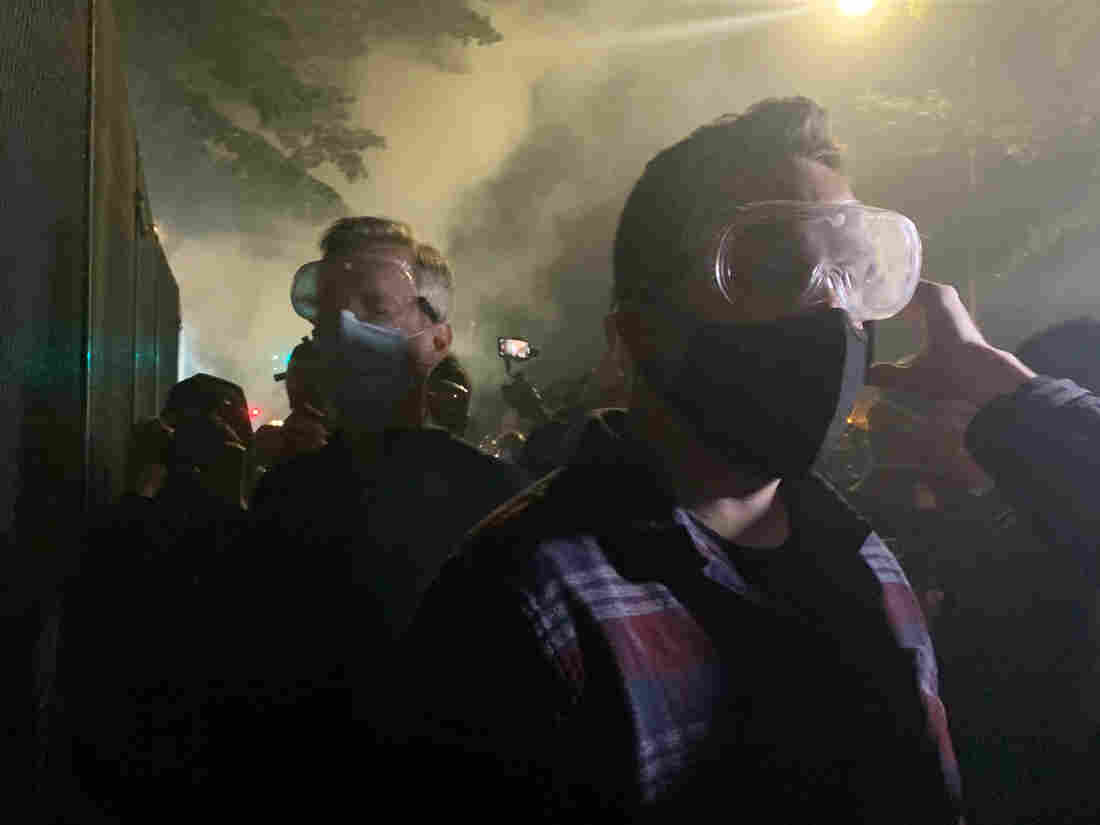 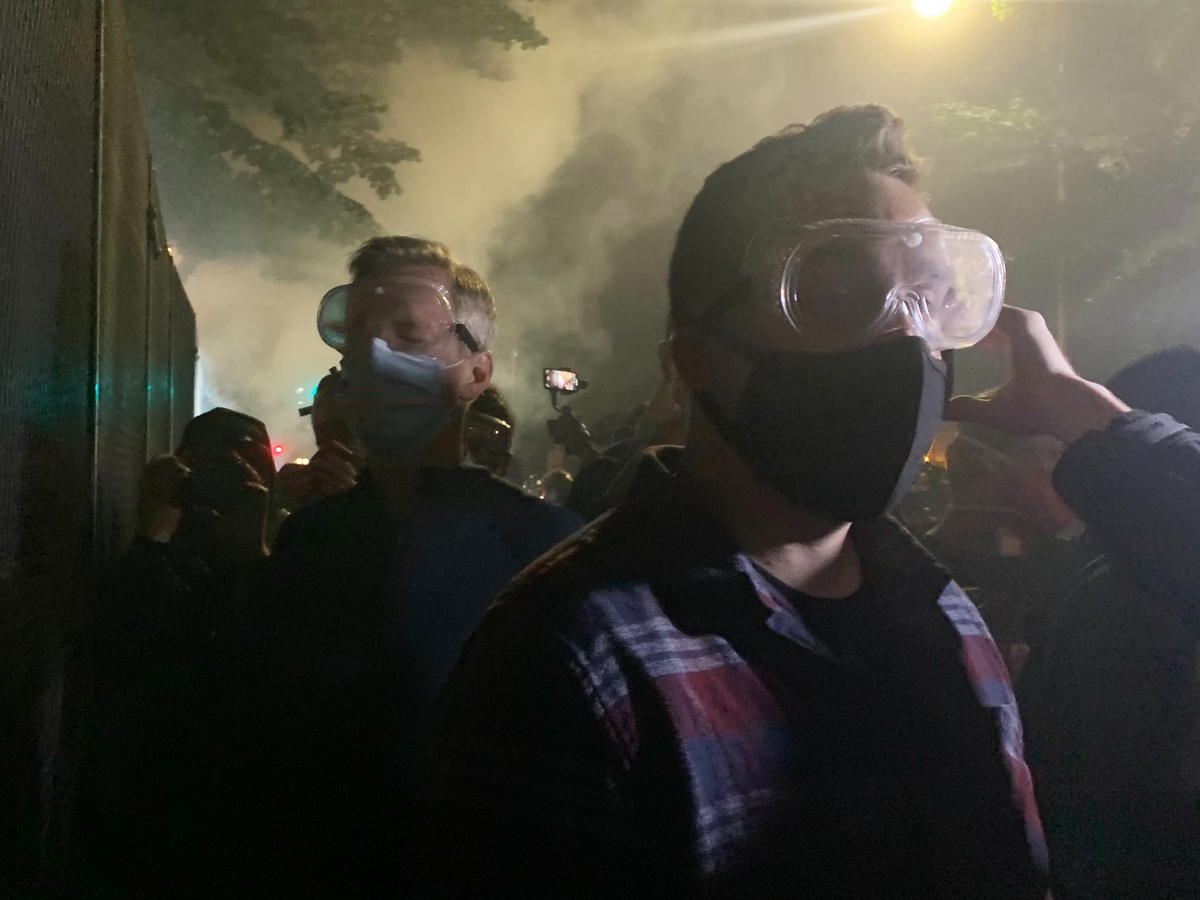 "It was not great," Wheeler said, according to NPR member station Oregon Public Broadcasting. "It makes your eyes really burn."

The mayor had been listening to demonstrators' complaints – about the presence of federal forces in the city, and about his own leadership – when the U.S. agents deployed tear gas and stun grenades in an attempt to disperse the crowd.

Wheeler, whom many in the crowd had booed and jeered, was near the front of the protest when the gas hit. As it did, the mayor remained in his spot along a fence between the protesters and the Mark O. Hatfield U.S. Courthouse, which has been the center of some demonstrations. Some in the crowd had begun trying to pry apart the fence; they managed to set a small fire in the space beyond the barrier.

At the time, Wheeler was wearing a cloth face mask — not a gas mask or protective goggles. As the gas took effect, he used water to try to clear his eyes and throat. But after more rounds of gas rolled in, the mayor left the area.

"I'm not scared," he later said, according to Oregon Public Broadcasting. "I'm just pissed off."

Wheeler and other mayors have formally asked President Trump to withdraw federal forces from U.S. cities, which they said has more to do with the November election than with maintaining law and order. Street demonstrations have now been held in Portland and other U.S. cities for nearly two months, following the death of George Floyd at the hands of police in Minneapolis.

The situation has been particularly fraught in Portland, where local and state officials said the aggressive federal push has created new dangers and incensed demonstrators.

Trump announced Wednesday that his administration also was sending a "surge" of federal forces to Chicago and to Albuquerque, N.M., to combat what he called "a shocking explosion of shootings, killings, murders and heinous crimes of violence." Hundreds of federal agents have already been sent to Kansas City, Mo., as part of the Justice Department's Operation Legend.

Democrats lead all of the cities where federal agents have been or are being deployed. The president and his campaign have retweeted several videos from the Portland protests, and they have sought to link Democratic candidate Joe Biden to the unrest.

"Far-left fascists have turned Portland into a violent hellscape," a Twitter account controlled by Trump's 2020 campaign wrote on Wednesday. It accused Biden of "siding with the mob" — amplifying the president's recent claim that his political opponents "want to destroy our suburbs."

In July so far, Trump's campaign has spent more than $18 million on TV ads that stoke public fear and anxiety, as NPR's Tamara Keith reported. Much of the message is based on the president's false claim that Biden wants to defund the police — an action many police reform protesters have demanded, but one that Biden has said he opposes.

The Portland City Council has moved to cut around $15 million from the police bureau's budget of more than $200 million. On Wednesday night, Wheeler said he does not support abolishing the agency altogether — a refusal that angered many protesters in the large crowd.

The Department of Homeland Security said its actions in Portland are warranted because, in its view, "violent anarchists continue to riot on the streets of Portland."

Federal law enforcement officers who have been deployed to the city are working "diligently and honorably to enforce federal law by defending federal property and the lives of their fellow officers," the agency said Wednesday.

"We will not retreat," acting DHS Secretary Chad Wolf said earlier this week.

Wolf's remarks came days after the Oregon Department of Justice announced that it is suing several federal agencies — including the U.S. Marshals Service, U.S. Customs and Border Protection and the Federal Protective Service — over allegations of civil rights abuses. Federal agents in Portland have used unmarked vehicles and failed to identify themselves as they seize people off the streets and take other actions against demonstrators.

In Portland, Wheeler has been criticized for his police department's response to the protests, and many demonstrators are demanding he resign. Wednesday night's foray did little to change that. Shortly after the mayor left the demonstration, the Portland Police Bureau "declared the event a riot" and ordered people in the crowd to disperse or face repercussions — including arrest or the possible use of tear gas, Oregon Public Broadcasting reported.

The situation in Portland is surreal, according to the station. Here's how it described the scene last night:

"The streets bear the powder burns of untold numbers of flash bangs, tear gas canisters and mortar-style fireworks set off in nightly clashes. The elk statue that long stood in the middle of Southwest Main Street is gone, replaced by an uneven mound of asphalt. Volunteers offer ribs, clothing and protest helmets free of charge in Lownsdale Square. The federal courthouse sits boarded up and graffitied in every manner of varicolored epithet."