Accessibility links
'Going To Take A Miracle' For Man Shot By Police To Walk Again, Lawyer Says : Live Updates: Protests For Racial Justice Attorney Benjamin Crump tweets the news of Jacob Blake's condition Tuesday — and adds he is praying it is not permanent. Blake was shot in the back by police in Wisconsin on Sunday. 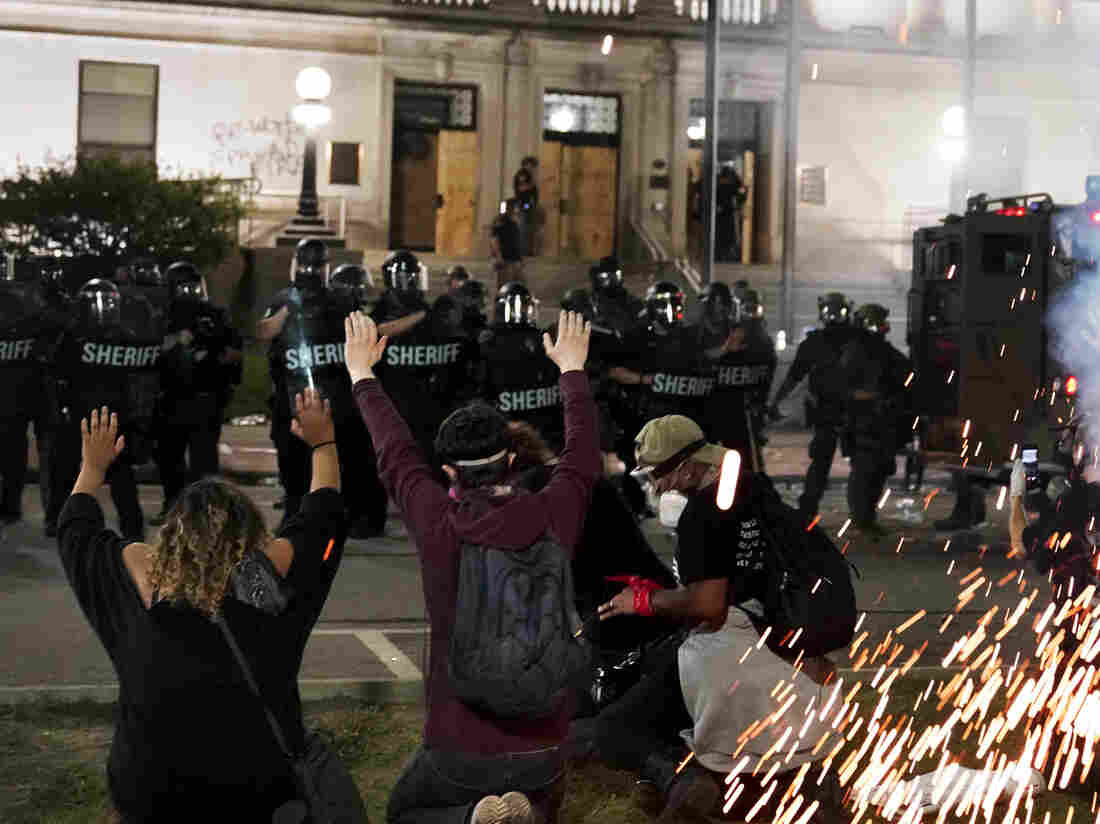 Police attempt to push back protesters outside the Kenosha County Courthouse late Monday in Kenosha, Wis. Protests continued for a second night after the police shooting of Jacob Blake. David Goldman/AP hide caption 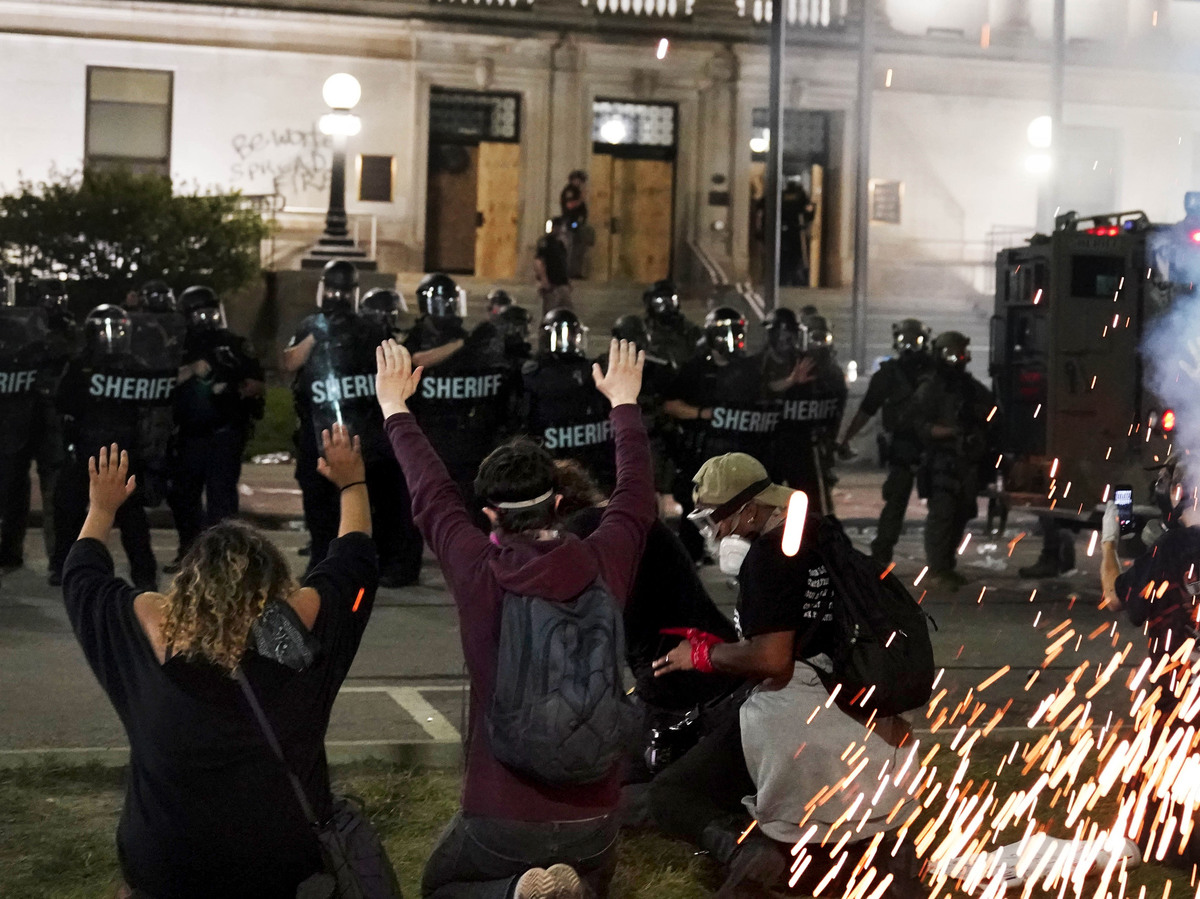 Police attempt to push back protesters outside the Kenosha County Courthouse late Monday in Kenosha, Wis. Protests continued for a second night after the police shooting of Jacob Blake.

Jacob Blake, the Black man who was shot multiple times at close range by police in Kenosha, Wis., over the weekend, is currently paralyzed from the waist down, according to the family's attorney.

Confirmed: Jacob Blake currently paralyzed from the waist down. Praying it's not permanent. #JusticeForJacobBlake

At a Tuesday afternoon press conference alongside Blake's family, including his parents and three sisters in Kenosha, Crump said that "it's going to take a miracle" for Blake to walk again.

He added that Blake was in surgery during the time of the press conference, "still struggling to sustain his life."

News of the extent of Blake's injuries was reported earlier Tuesday by the Chicago Sun-Times, which spoke with the man's father, also named Jacob Blake.

Crump also noted the family is calling for the immediate termination of the officers involved in the encounter and for prosecutors to file charges against the officer who appears to have shot Blake.

Attorney Patrick Salvi, who is also representing the family, provided details at the briefing of how severely Blake was injured. The "at least seven, as many as eight" rounds fired into him "from point-blank range" will likely cause irreversible damage, he said.

A bullet went through some or all of his spinal cord. He suffered damage to his kidney, liver and was also shot in the arm. Additionally, Blake has holes in his stomach and had to have the majority of his colon and small intestines removed, Salvi said.

"Jacob has a long road ahead of him, a lot of rehabilitation," Salvi said.

He also alluded to a likely civil lawsuit against the city in the future.

One positive note shared at the press briefing is that Blake is at least partially lucid, and was able to have a brief conversation with his mother, Julia Jackson, during her visit with him at the hospital.

"The first thing he did when he looked at me was cry," his mother said.

She added that as she started to pray, Blake asked an officer in the room to join them and the three prayed together.

Blake's mother also spoke to the unrest that's played out over the last two nights following the shooting.

"If Jacob knew ... the violence and the destruction, he would be very unpleased," Jackson said, adding that she's yearning for her son's recovery and praying for the healing of the nation.

Footage went viral of the police shooting Blake several times from inches away Sunday as he leaned into an SUV. Three of his children were reportedly in the back seat at the time.

Kenosha, now the nation's latest epicenter of unrest, saw anger and frustration boil over Monday night. Demonstrators, as they have done in many cities across the country this summer, took to the streets to call for an end to police brutality and systemic racism.

These demands have intensified in the wake of recent high-profile killings of Black Americans, including George Floyd and Breonna Taylor. 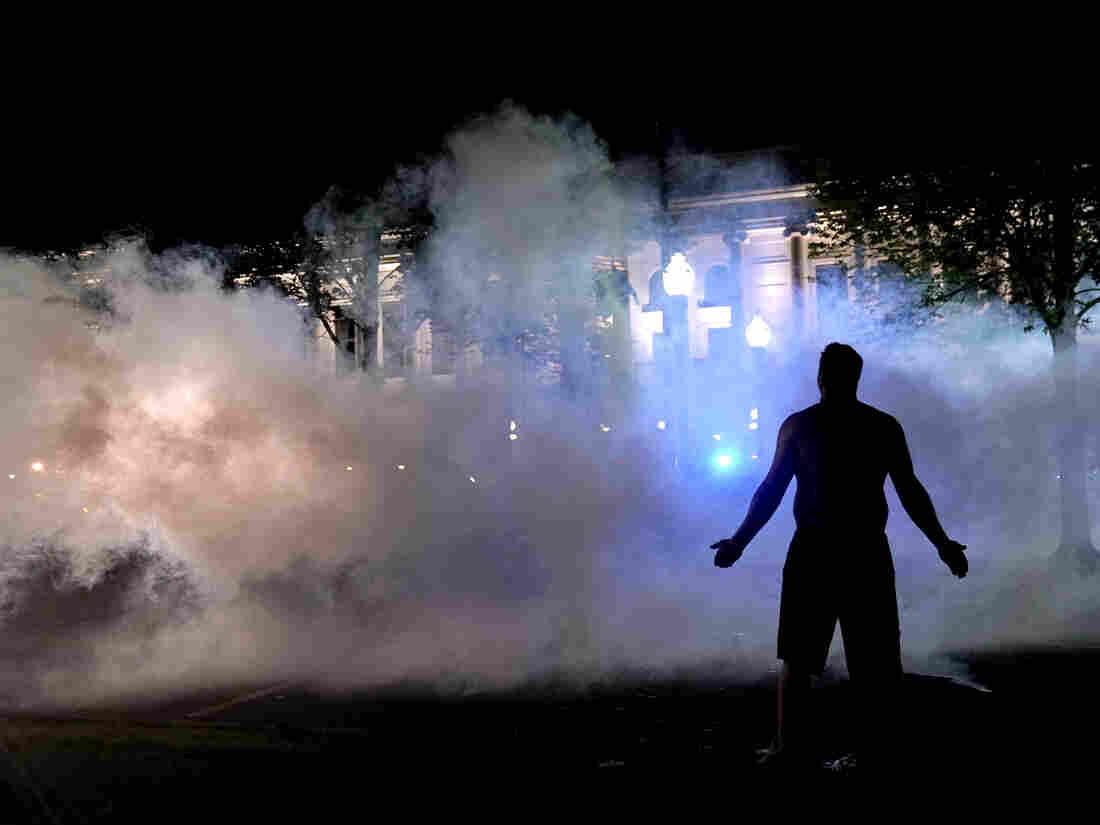 A protester stands near a cloud of tear gas fired by police late Monday outside the Kenosha County Courthouse. David Goldman/AP hide caption 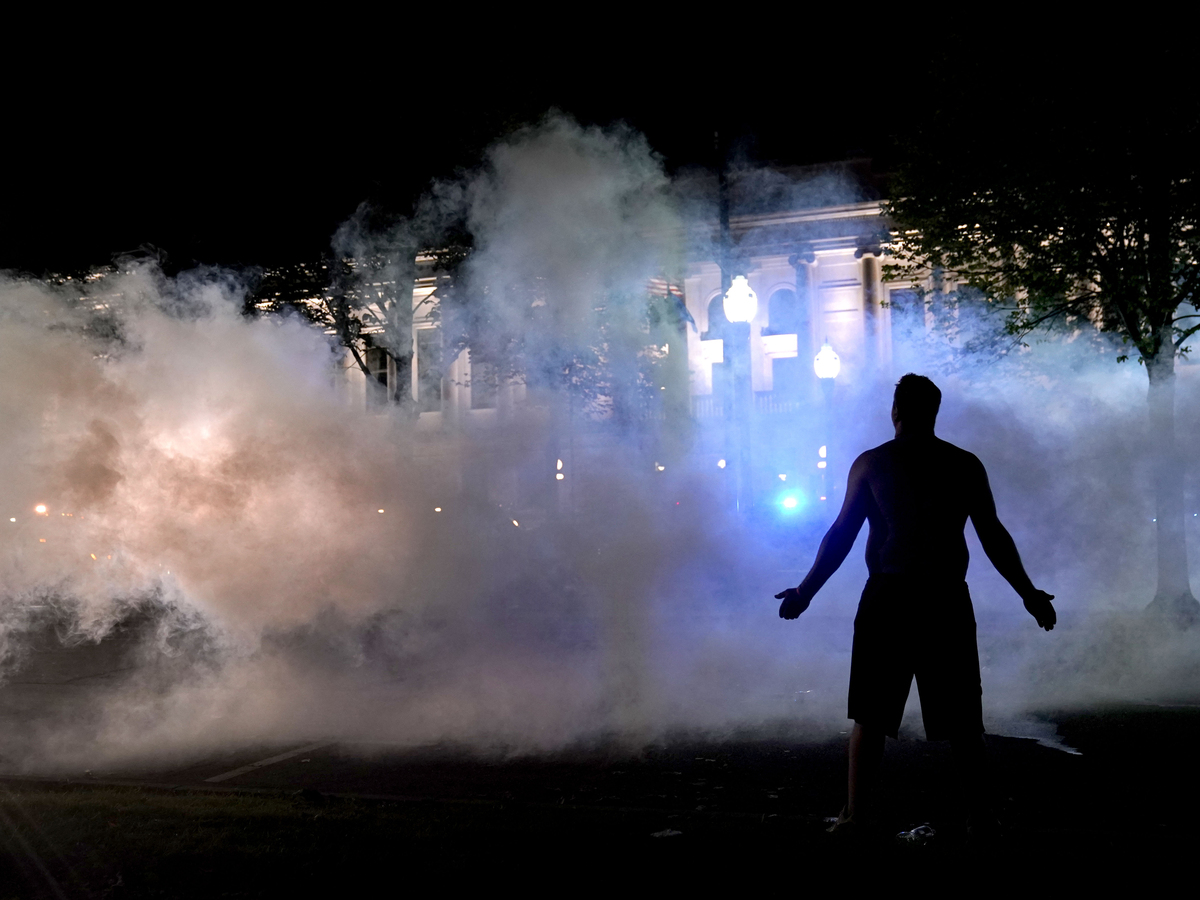 A protester stands near a cloud of tear gas fired by police late Monday outside the Kenosha County Courthouse.

The station also noted that law enforcement appeared to use other crowd dispersal tactics, including firing rubber bullets on demonstrators.

Some protesters tried to force their way into the city's public safety building Monday afternoon, according to the Milwaukee Journal Sentinel.

There were also vehicles set on fire, including a garbage truck, according to reporter Matt Smith of Milwaukee-based ABC affiliate WISN.

Reporter Julie Bosman of The New York Times captured a scene of several businesses on fire in Kenosha overnight.

"Every person should be able to express their anger and frustration by exercising their First Amendment rights and report on these calls to action without any fear of being unsafe," Evers said.

"This is a limited mobilization of the National Guard focused on supporting the needs of local first responders to protect critical infrastructure, such as utilities and fire stations, and to ensure Kenoshians are able to assemble safely," the governor added.

On Sunday, hours after the video of Blake's encounter with police began surfacing on social media, Evers tweeted his dismay over what he had seen. He said he is "hoping earnestly that he will not succumb to his injuries."

As NPR reported, at least seven shots could be heard on the widely circulated video that's roughly 20 seconds long.

Before the shots, one of the officers trails Blake and grabs his shirt with his left hand in what appears to be an attempt to pull him away from a vehicle. The officer's service weapon, in his right hand, is pointed inches from the man's back.

As soon as Blake leans inside, the officer appears to shoot.

Sounds of the vehicle's horn can be heard seconds later, presumably from Blake falling onto it.

The Wisconsin Department of Justice said it is investigating the shooting and is being assisted by the Kenosha County Sheriff's Department. It also said the officers involved are on administrative leave and are cooperating with the investigation.