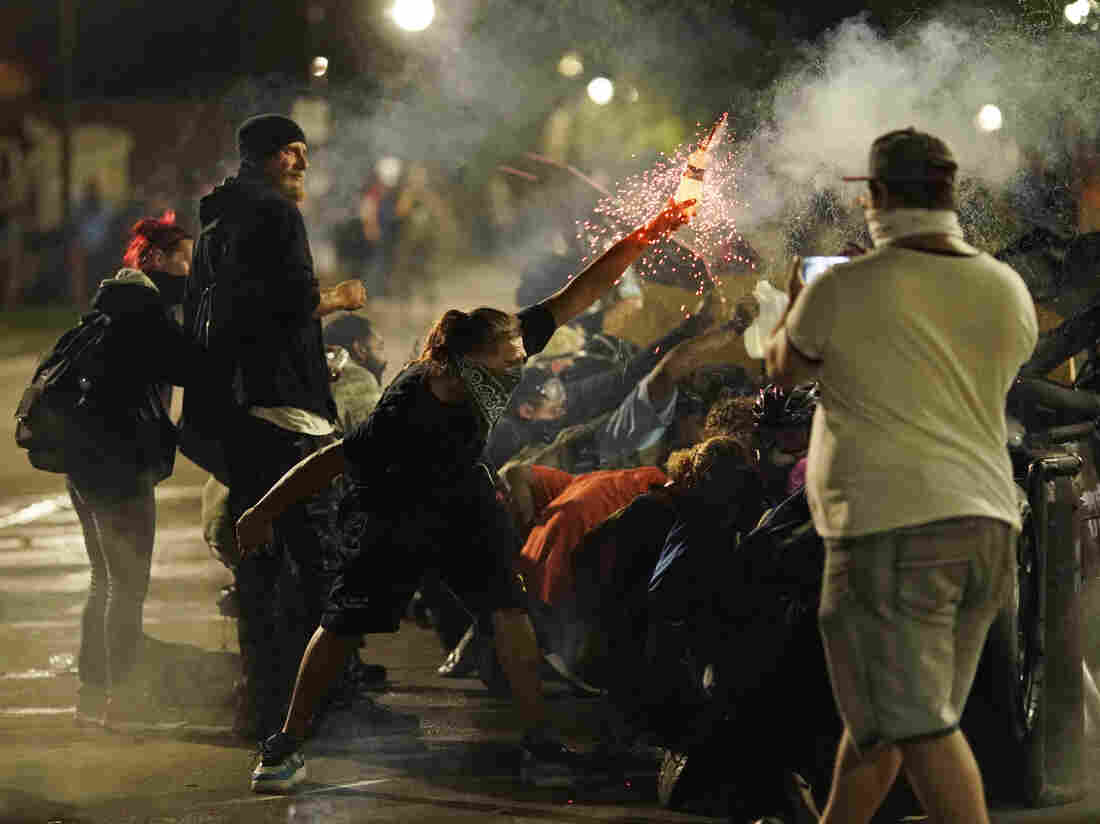 Demonstrations sparked after the police shooting of a Black man, Jacob Blake, continued in Kenosha, Wis., on Tuesday. The third night of the protests turned deadly with the fatal shootings of two Kenosha-area residents. David Goldman/AP hide caption 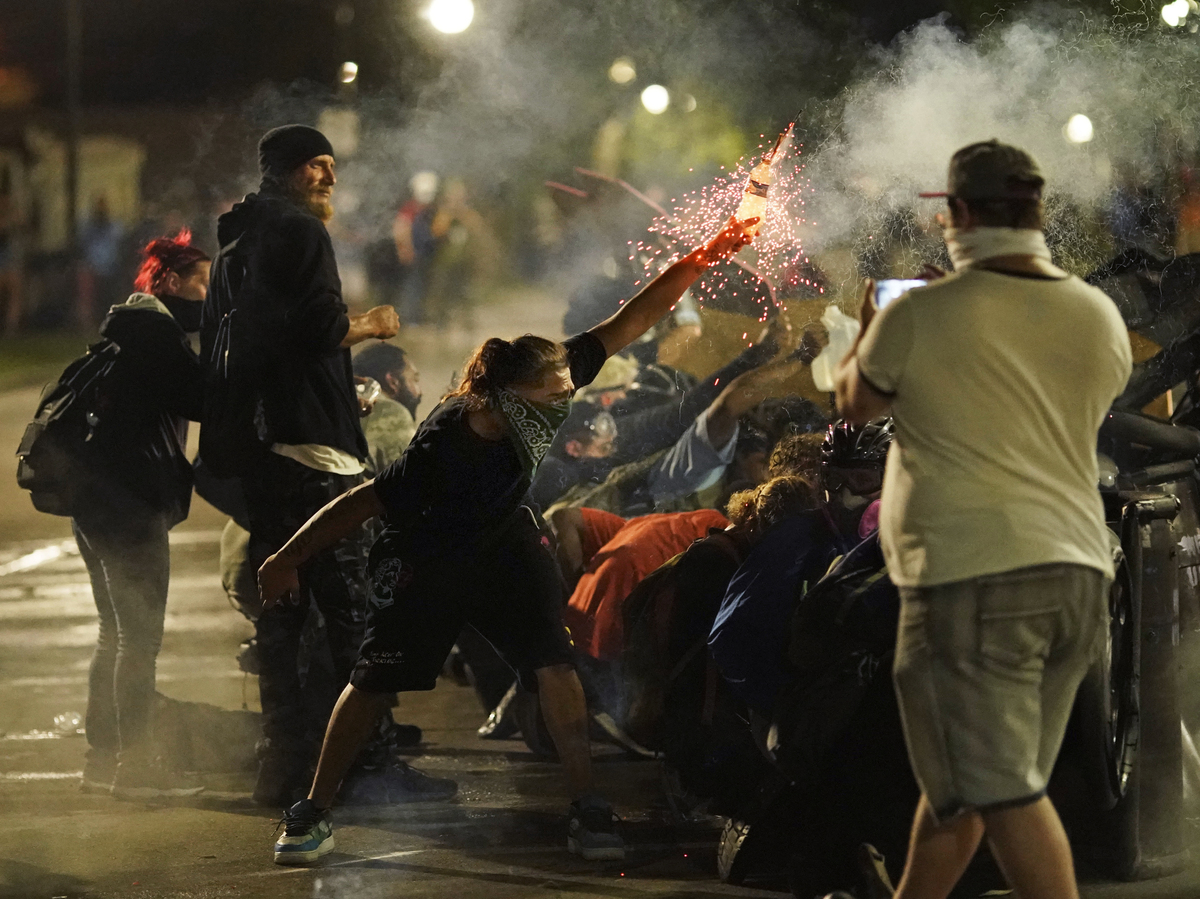 Demonstrations sparked after the police shooting of a Black man, Jacob Blake, continued in Kenosha, Wis., on Tuesday. The third night of the protests turned deadly with the fatal shootings of two Kenosha-area residents.

An Illinois teenager has been arrested in connection with a deadly shooting Tuesday in Kenosha, Wis., during the third consecutive night of protests following the police shooting of a Black resident.

Kyle Rittenhouse, a white male teenager, has been charged with first-degree intentional homicide and was taken into custody by police in Antioch, Ill., about 15 miles southwest of Kenosha.

"Last night a 17-year-old individual from Antioch, Ill., was involved in the use of firearms ... to resolve whatever conflict was in place," Kenosha Police Chief Daniel Miskinis said during a Wednesday press briefing.

"The result of it was two people are dead."

He said two Kenosha-area residents, one 26 years old and another who was 36, were killed. A third person was injured but was expected to survive.

Officials said the investigation is ongoing. The names of the victims were not released. The shooting took place just before midnight, according to a police statement released earlier Wednesday.

Miskinis said it is unclear at this point what led to the suspect using deadly force but said that all the people involved were out beyond the 8 p.m. curfew in place Tuesday.

Officials announced the curfew would be moved up an hour to 7 p.m. local time and that it would be extended through Sunday.

"The curfew is in place to protect," Miskinis said. "Had persons not been out in violation of that, perhaps the situation that unfolded would not have happened."

At the time of the briefing the suspect was in the custody of the Lake County judicial system pending an extradition hearing to transfer custody from Illinois to Wisconsin, according to Antioch police.

"Our Village of Antioch is deeply saddened by all loss of life. Our hearts and prayers extend to the friends and family who lost a loved one," Antioch Mayor Lawrence Hanson said in a statement.

Earlier Wednesday, Kenosha County Sheriff David Beth told the Milwaukee Journal Sentinel one of the victims suffered a gunshot wound to the head. Another victim was shot in the chest; however, Beth said he was unsure where the third victim was shot.

President Donald Trump tweeted Wednesday that he would be "sending federal law enforcement and the National Guard to Kenosha, WI to restore LAW and ORDER!" Wisconsin Gov. Tony Evers had agreed to accept the federal assistance, Trump said.

...TODAY, I will be sending federal law enforcement and the National Guard to Kenosha, WI to restore LAW and ORDER!

In response to the events in Kenosha, sparked by the viral video of Blake being shot multiple times in the back by police, the NBA announced all three playoff games scheduled for Wednesday were postponed.

One video posted to social media overnight depicts a chaotic and graphic scene where multiple gunshots can be heard. In it, a man is jogging down the middle of a street carrying a long gun.

A person can be heard on the video asking, "What he do?"

"He shot someone," another person answers.

Moments later, the man with the gun falls to the ground; someone yells, "Get his a**!"

The man then turns on his backside and hoists the gun as people run at him, including one person who jumps and kicks at him.

The man then appears to start shooting at the people around him.

One man is shot at close range, stumbles off and falls to the ground. A second man appears to be shot in the arm or shoulder and retreats.

Cries of "Medic! Medic!" can be heard.

Later in the footage, the gunman approaches law enforcement with his arms raised above his head, but no one stops or apprehends him before the video cuts off.

Beth, the Kenosha County sheriff, said armed civilians have been patrolling Kenosha streets during the protests, according to the Milwaukee Journal Sentinel. He said he was not sure if the shooter was part an armed militia.

"They're like a vigilante group," Beth told the paper. 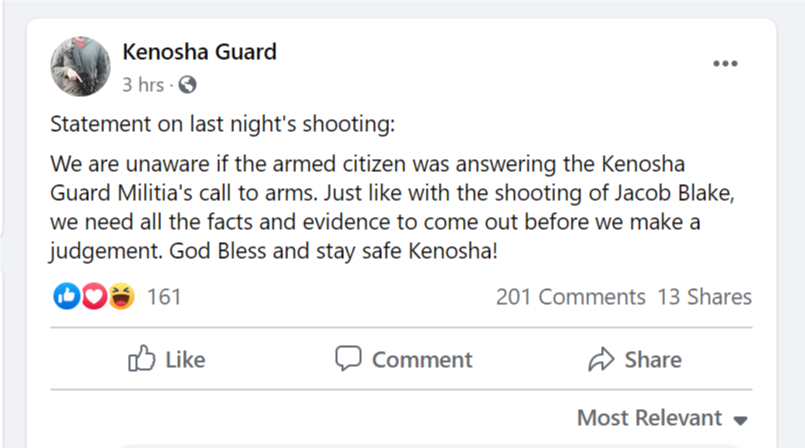 A screen grab from a Facebook group called the Kenosha Guard posted a statement Wednesday saying it was not sure if the perpetrator of violence Tuesday night in Kenosha was affiliated with the group. Kenosha Guard/Screenshot by NPR hide caption

A Facebook group calling itself the Kenosha Guard posted a message Wednesday saying it was not sure if a shooter had answered the group's call to arms.

The group had been open to the public as of Wednesday morning, but NPR confirmed later that Facebook took the group's page down for violating the social media company's policy banning militia organizations when they discuss potential violence.

"At this time, we have not found evidence on Facebook that suggests the shooter followed the Kenosha Guard Page or that he was invited on the Event Page they organized," a spokesperson said in a written statement.

"However, the Kenosha Guard Page and their Event Page violated our new policy addressing militia organizations and have been removed on that basis."

NPR took screen grabs of messages posted to Kenosha Guard's Facebook page before it was taken down.

"We are unaware if the armed citizen was answering the Kenosha Guard Militia's call to arms," the group said Wednesday. "Just like with the shooting of Jacob Blake, we need all the facts and evidence to come out before we make a judgement. God Bless and stay safe Kenosha!"

In a Facebook post Tuesday, the group addressed Kenosha's police chief and announced it had more than 3,000 volunteers who said they would be present in several city neighborhoods. It also warned law enforcement not to tell members of the group to go home under threat of arrest. 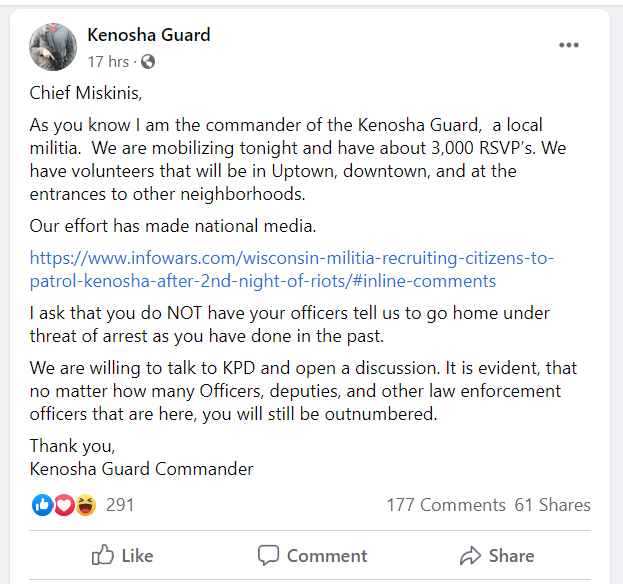 A Facebook page called the Kenosha Guard was previously open to the public but has since been removed. Earlier this week the group said 3,000 people would respond to a call to patrol several Kenosha neighborhoods. Kenosha Guard/Screenshot by NPR hide caption

Evers, the state's Democratic governor, declared a state of emergency on Tuesday and ordered additional Wisconsin National Guard troops to assist local law enforcement agencies, bringing to 250 the number of troops deployed to the city.

Sen. Ron Johnson, R-Wis., said in a tweet Wednesday morning that it was "heartbreaking" that violence in the city had led to fatalities. He then chastised the state's governor for not yet accepting an offer from Trump for more National Guard troops.

It is heartbreaking that the violence in Kenosha has now escalated to include the loss of human life.  Although it will not guarantee peace,  @GovEvers should reconsider his refusal to accept @potus offer to send more personnel to restore order. (1/2)

On Wednesday, members of the Kenosha County Board of Supervisors sent a letter to the Evers requesting the number of troops be increased to 1,500 and for them to "be sent here immediately."

The protests were sparked in Kenosha, a city of 100,000 people about 30 miles south of Milwaukee, after a video posted on social media went viral Sunday showing Blake being shot multiple times in the back by police as he leaned into a gray SUV. Blake's three young sons were in the vehicle when he was shot.

Addressing the media Tuesday, Benjamin Crump, the family's attorney, confirmed that Blake was paralyzed from the waist down. He said at that time that Blake was having another surgery and said that "it's going to take a miracle" for him to walk again.

Another attorney for the family, Patrick Salvi, shared details of the extent of Blake's injuries, including that a bullet went through some or all of his spinal cord and damaged his kidney and liver. Blake also was shot in the arm, had holes in his stomach, and had to have the majority of his colon and small intestine removed, Salvi said.

On Monday, the Wisconsin Department of Justice said that it was investigating the shooting of Blake and that it was being assisted by the Kenosha County Sheriff's Department.

The officers involved in the Blake shooting have not been identified, but officials said they have been placed on administrative leave and are cooperating with the investigation.