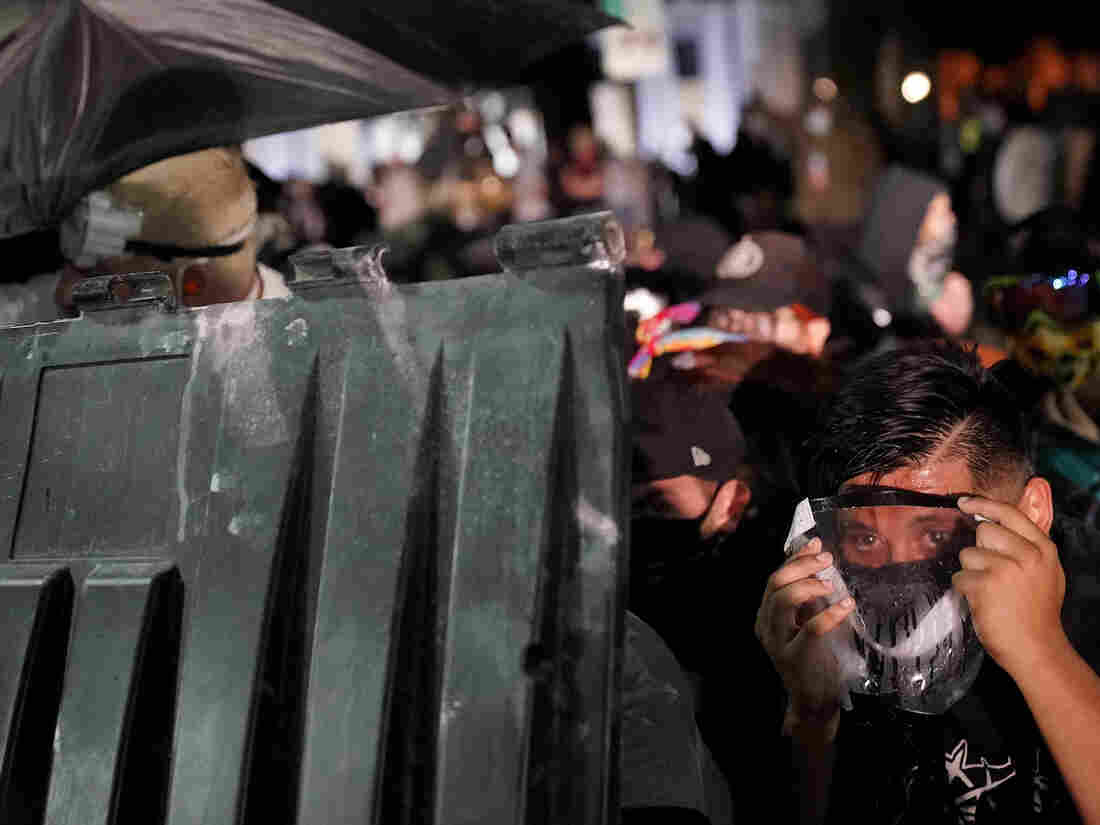 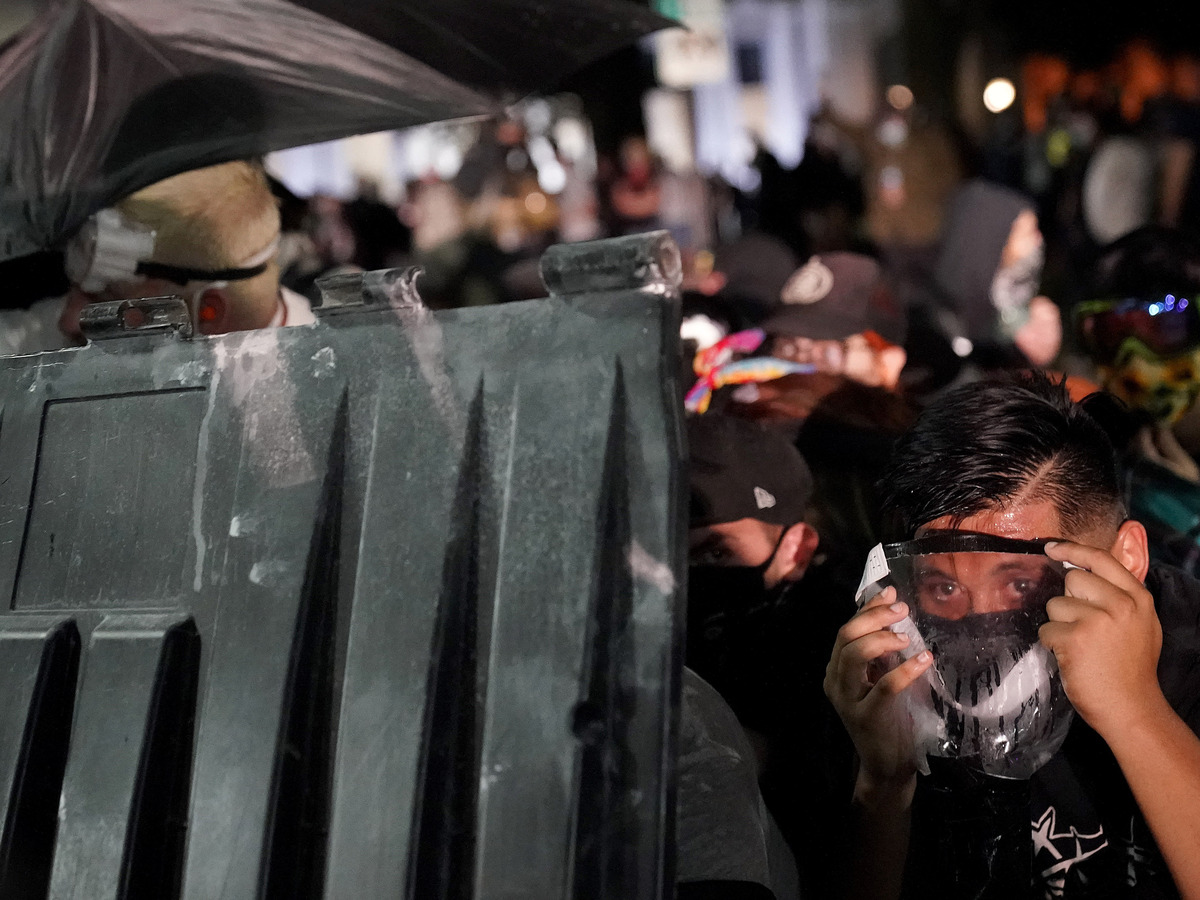 A protester takes cover during clashes outside the Kenosha County Courthouse late Tuesday in Kenosha, Wis.

Despite wearing a full replica police uniform — complete with tie, bomber jacket and trooper hat — Kyle Rittenhouse looked a lot more like a Halloween trick-or-treater than an actual cop in the photo taken in 2017.

After all, Rittenhouse was not even 15 years old when he posed for the picture that remained for years on the Facebook page of a "public safety cadet program" in Chicago's far northern suburbs.

And he still looked younger than his actual age this week when the 17-year-old from Antioch, Ill., was arrested in connection with two fatal shootings in Kenosha, Wis.

Police said two people — both area residents, one 26 and the other 36 —were killed and another was injured in the shootings Tuesday. It was the third night of civil unrest sparked by a white police officer shooting a Black man repeatedly in the back at point-blank range.

Antioch police took Rittenhouse into custody Wednesday, and he is being held in the Lake County, Ill., Hulse Juvenile Detention Center without bond, according to court records.

He is wanted in Kenosha County on accusations of first-degree intentional homicide after having "fled the state of Wisconsin with the intent to avoid prosecution for that offense," according to court documents.

A lawyer for the Lake County Public Defender's Office, which is listed as representing Rittenhouse, declined to comment.

In addition to his participation as a youth police cadet in Lake County, his social media posts showed Rittenhouse was a staunch law-enforcement supporter who had posted tributes to officers killed in the line of duty in Chicago and the northern suburbs.

Another social media account that appeared to belong to Rittenhouse suggests he was also a supporter of President Trump. The TikTok account, with just 25 followers, read "Trump 2020" with a U.S. flag next to it, and, "Bruh I'm just tryna be famous."

In one video recorded in Kenosha before the shootings and posted on social media, a teen who identifies himself as "Kyle" explained that he went to the center of the city on Tuesday evening with the intention of assisting police in dealing with rioters.

Protests and looting had marked the first couple of days after the shooting on Sunday of Jacob Blake. Blake's family members say he was left paralyzed by the gunshots fired at him as he tried to get into his car where his three children were sitting. Video showed police officers yelling at him with weapons drawn as Blake walked toward the car.

There were more clashes on Tuesday evening in downtown Kenosha, with police firing tear gas at a crowd that shot off fireworks, threw bottles and smashed car windows, as seen on videos recorded that night.

But the fatal confrontations came after the crowd near the country courthouse was dispersed from the area.

"We don't have non-lethal" weapons

In a light-green T-shirt and gripping a long-barreled gun, a teen who appears to be Rittenhouse spoke to a man recording a video at one point before the shootings. He assured the man that he and other armed men alongside him were carrying lethal weapons.

"We don't have nonlethal," the teenager said, wearing a baseball cap backward and adding he had just "got pepper-sprayed by a person in the crowd."

He then abruptly curtailed his comments for the camera, assuming the voice of a polite but firm police officer to ask people in front of him to step aside for what he described as emergency vehicles.

The teen in the video looks especially small among the other armed civilians and officers.

According to court records, Rittenhouse is 5 feet, 4 inches tall, weighs 150 pounds and is white.

In another video recorded before the shootings, a teen who appears to be Rittenhouse describes himself as a member of a local militia that was effectively protecting businesses in Kenosha.

A third video again shows the teen armed with a gun and strolling among what appear to be uniformed police officers.

In that video, the law-enforcement personnel thank the teen and others in plainclothes and toss them bottles of water from a circular door that pops open from the top of an armored vehicle.

"We appreciate you guys; we really do," a man says to the group through a speaker on the armored truck.

Protecting a city from "evil thugs"

Citing the disturbances, some people issued social media calls Tuesday for armed "patriots" to come with their weapons to protect property in Kenosha, where buildings had burned the past two nights.

A Facebook page titled "Kenosha Guard" contained multiple vows to protect the lakeside city in a strong show of force, on behalf of what they described as outnumbered police. The page has since been taken down.

"Any patriots willing to take up arms and defend out (sic) City tonight from the evil thugs?" according to one post Tuesday on the Kenosha Guard page. "Nondoubt (sic) they are currently planning on the next part of the City to burn tonight!"

The group planned to convene at 8 p.m. at Kenosha's central park for an event dubbed "Armed Citizens to Protect our Lives and Property." Their presence was to last through the night.

A curfew had been set in the city for 8 p.m.

Other members of the militia "locked down" entrances to a sprawling subdivision of single-family homes west of downtown called WhiteCaps, according to the Facebook page.

The page also displayed an arrest warrant and criminal complaint against Blake that were issued before the Kenosha officer shot him, with the comment, "Seems like a nice guy."

Another man, though, merely advised the group of a rumored plot to attack the Mars Cheese Castle, the popular Dairy State tourist site near the interstate highway between Chicago and Milwaukee.

On Wednesday morning, a statement on the Kenosha Guard page read, "We are unaware if the armed citizen was answering the Kenosha Guard Militia's call to arms. Just like with the shooting of Jacob Blake, we need all the facts and evidence to come out before we make a judgement. God Bless and stay safe Kenosha!"

"At this time, we have not found evidence on Facebook that suggests the shooter followed the Kenosha Guard Page or that he was invited on the Event Page they organized," a spokesperson said in a written statement.

"However, the Kenosha Guard Page and their Event Page violated our new policy addressing militia organizations and have been removed on that basis."

"I just killed somebody"

Videos purporting to be of the fatal shootings Tuesday evening has gone viral on social media. In one, a male can be seen being chased and then firing at someone from close range. Moments later, the shooter is seen standing above a white man who had been shot in the head near a business in Kenosha.

As others scurry to convert a shirt into a tourniquet to apply to the injured man's bleeding wound in the back of his head, the apparent shooter runs away and says into a cellphone held tight to his left ear: "I just killed somebody."

Soon after the wounded man was carried away, several people were shown chasing the shooter down the middle of a street.

He stumbles and, as his pursuers near him, he shoots two of them.

One of the men was left with a gaping wound in his arm, as seen in yet another, particularly gruesome video on social media.

Although people yell that the teen in the green shirt is the shooter, police vehicles drive past him toward the victims, a video shows.

Rittenhouse was born in 2003, and his mother has worked as a nursing assistant in Lake County. In 2014, she sued for child support and filed for bankruptcy in 2018, court documents show. In her bankruptcy filing, Rittenhouse's mother wrote that she also had a daughter, who was then 17.

Rittenhouse was charged a week ago in a separate case in Kenosha County for allegedly speeding between 20 and 24 mph over the limit on a freeway and for driving without a valid license.

A Facebook page that appeared to be Rittenhouse's showed publicly-visible posts that were almost exclusively about police.

The profile picture posted to the page was a photo of him and another young white male holding guns. The backdrop for the photo is a U.S. flag adorned with the "thin blue line," a symbol of solidarity with police. Around the photo was a circle with the caption, "Duty. Honor. Courage. Blue Lives Matter."

That slogan is often used by police and their most-fervent supporters in response to Black Lives Matter — the movement inspired by the many cases of police using excessive force against persons of color.

In December 2018, the page solicited donations to "Humanizing the Badge" for Rittenhouse's 16th birthday. He explained that the organization was a nonprofit group "seeking to forge stronger relationships between law enforcement officers and the communities they serve."

Buzzfeed News reported that Rittenhouse attended a Trump political rally in Iowa earlier this year and posted a video from the event.

The TikTok account bearing his name also featured photos of Rittenhouse with guns. As of Wednesday, the account "was banned due to multiple Community Guidelines violations," according to the company.

On Wednesday, a Facebook page for the "Grayslake-Lindenhurst-Hainesville Public Safety Cadet Program" that once touted Rittenhouse among its participants vanished. That page had once commented on the boy's photo with a cheery message.