Accessibility links
Kenosha Police Reject Accusations Of Assistance From Armed Vigilantes : Updates: The Fight Against Racial Injustice Law enforcement officials are pushing back on suggestions that police showed deference to groups of armed whites at Black Lives Matter protests ahead of fatal shootings. 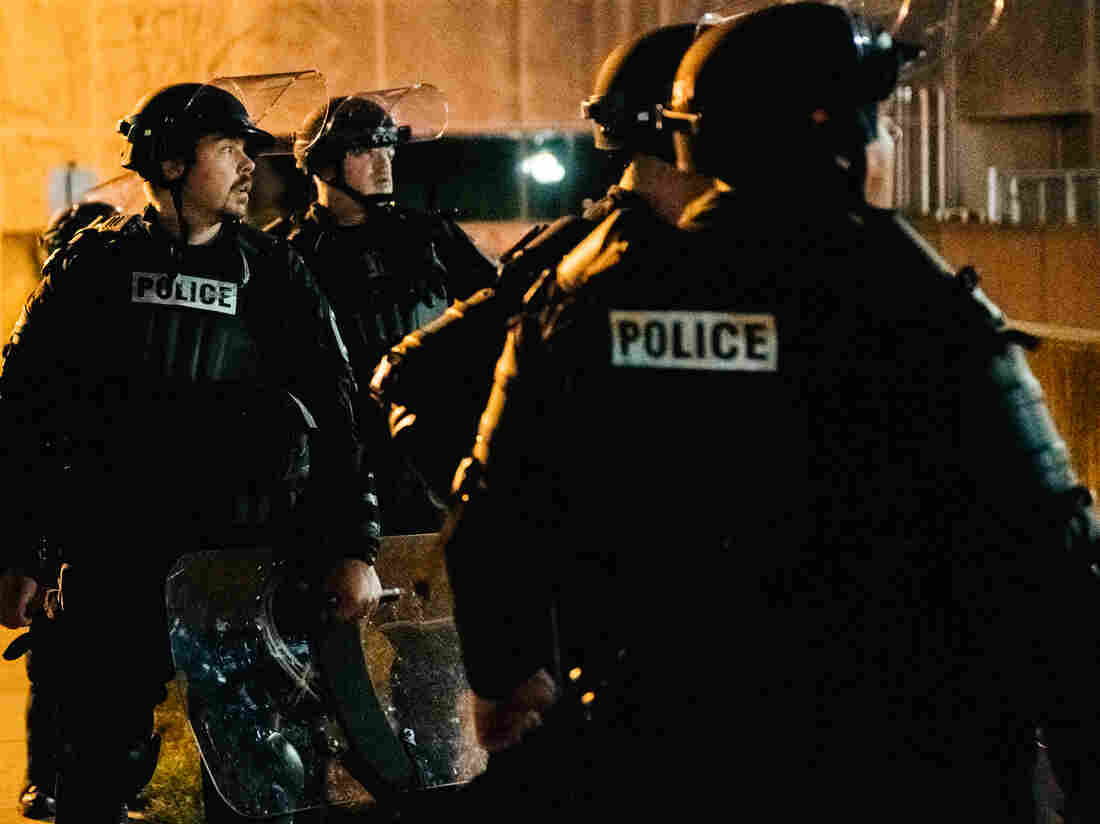 Police officers stand guard inside of a fenced area that surrounds several government buildings in Kenosha, Wis., on Thursday.

Law enforcement officials in Kenosha, Wis., are pushing back on suggestions that police showed deference to white vigilantes at Black Lives Matter protests following the fatal shooting last Tuesday of two demonstrators, allegedly by a an armed teen.

At a Friday afternoon news conference, Kenosha Police Chief Daniel Miskinis said that the failure of authorities to stop the shooting suspect, 17-year-old Kyle Rittenhouse, who was seen carrying an AR-15-style rifle prior to the shooting, did not show a lapse in judgement.

"There was nothing to suggest that this person was involved in any criminal behavior," Miskinis told reporters.

Kenosha County Sheriff David Beth — asked about a video taken before the shooting in which officers in an armored vehicle can be heard thanking who appear to be armed vigilantes for their assistance and then offering them water — said that the armored car in question did not belong to his department. He then added: "The fact that one of our people here threw a bottle of water to someone walking down the street – I understand that part."

Beth said if armed individuals are "protecting their property, I have no issue with that."

"The people who have been here carrying guns, they haven't been arrested because it's a right that they have," he said.

He said that regardless of what the person in the armored vehicle said, "it does not reflect what we in Kenosha are asking for."

Meanwhile, Wisconsin Attorney General Josh Kaul, speaking with NPR's All Things Considered on Friday, said he was "disturbed" by the video.

"I hope and expect that a review will be conducted of that incident, certainly by the agency for which that officer works," he said.

A judge on Friday postponed Rittenhouse's extradition from Illinois to give him more time to hire a legal team.

The killings occurred on the third night of protests in Kenosha against the police shooting of Jacob Blake, a Black man. Blake was shot in the back seven times at close range by a Kenosha police officer on Sunday.

The shootings alleging the involvement of Rittenhouse were caught on video and widely circulated on social media.

He is also charged with misdemeanor possession of a dangerous weapon below the legal age of 18 and faces the possibility of life in prison if convicted of intentional homicide.

Rittenhouse was not present at Friday's livestreamed hearing in Waukegan, Ill., which lasted less than 10 minutes. The judge delayed his extradition to Wisconsin until Sept. 25.

The Milwaukee Sentinel reports that Rittenhouse is being represented by a team of attorneys led by L. Lin Wood, known for helping Covington Catholic High School student Nicholas Sandmann sue major media companies, such as CNN and The Washington Post.

And because of the efforts of my Followers who light the fires of truth & justice for ALL. Thank you.