Wisconsin Gov. Tony Evers (left) speaks at a news conference held Thursday in Kenosha, Wis., to discuss recent civil unrest surrounding the police shooting of Jacob Blake, a Black man who was shot several times in the back in front of his children. Brandon Bell/Getty Images hide caption 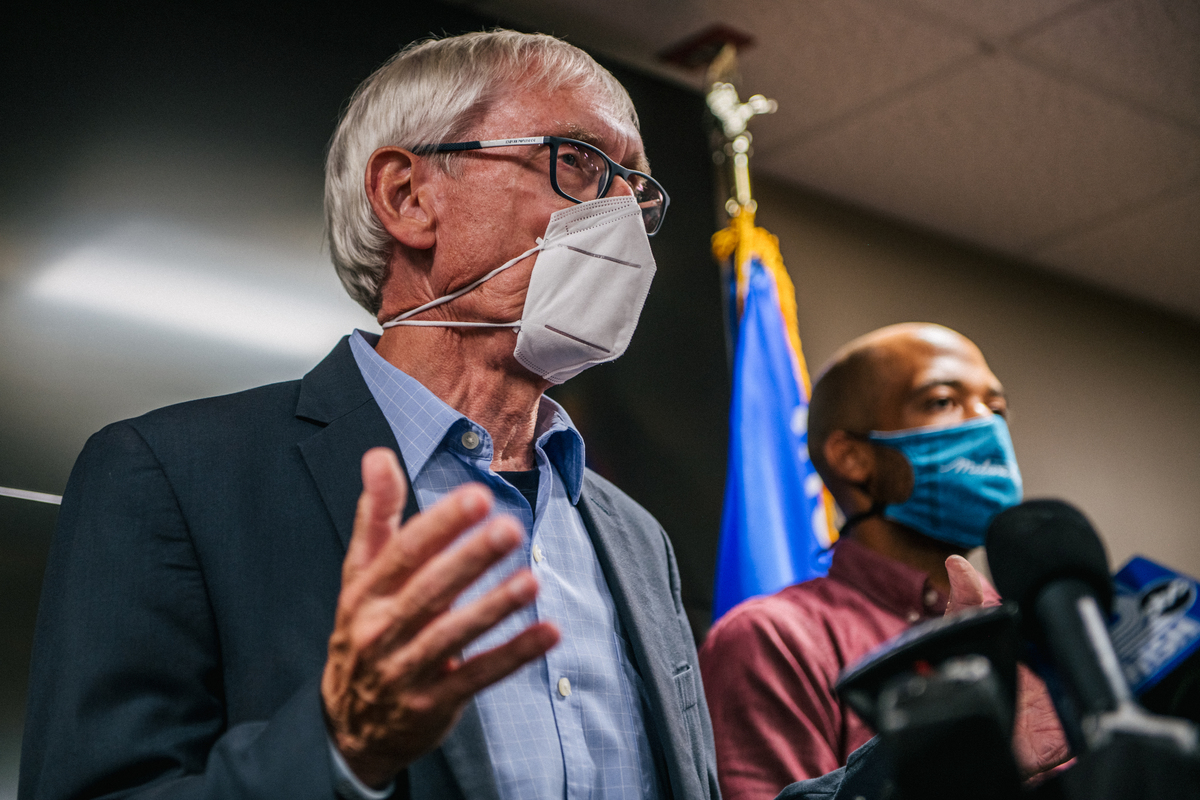 Wisconsin Gov. Tony Evers (left) speaks at a news conference held Thursday in Kenosha, Wis., to discuss recent civil unrest surrounding the police shooting of Jacob Blake, a Black man who was shot several times in the back in front of his children.

The Wisconsin state Legislature is scheduled to officially convene Monday for a special session on police training requirements and policy standards. But GOP lawmakers aren't expected to be present, nor are any debates or votes expected to happen.

The special session, called by Gov. Tony Evers, who Sunday asked President Trump not to visit the state, puts on display the policy stalemate between the Democratic governor and the state's Republican-controlled Legislature after a police officer shot Jacob Blake in Kenosha, Wis., a little more than a week ago.

The shooting spurred several days of unrest in the city, including the shooting deaths of two protesters.

For months, Evers has urged lawmakers to consider bills that would set statewide standards for police use of force and ban chokeholds and no-knock warrants, but Republicans have argued they need more time to craft their own proposals.

Less than 24 hours after Blake's shooting, the governor signed an executive order compelling the Legislature to convene in a special session. However, neither state law nor the state Constitution requires lawmakers to participate in debate or to vote on any bills during a special session. They may simply convene and immediately adjourn. They did just that for a session Evers called last November to address state gun laws.

Republican state Senate Majority Leader Scott Fitzgerald, who is in the middle of a campaign for Congress, was silent for several days following Blake's shooting and the governor's call. On Friday, his office confirmed the Senate will officially convene on Monday without any senators present.

In a prepared statement, Fitzgerald said he expects lawmakers to consider a variety of proposals related to policing "in the coming months." He said he would like those bills to include legislation to increase penalties for violence against police.

"The riots in Kenosha and Madison this week further demonstrated that first responders are performing their public service duties at great risk to their personal safety," he said.

Another proposal from a different Republican state senator, unveiled last week, would penalize local governments for shifting money from their law enforcement budgets to other things such as public health or education initiatives — a move many activists are calling "defunding the police."

State Assembly Speaker Robin Vos argues that Evers is being disingenuous and partisan in calling the special session.

"We have an opportunity to bring people together to find solutions," Vos said shortly after Evers called the special session. "Instead, the governor is choosing to turn to politics again by dictating liberal policies that will only deepen the divisions in our state."

As an alternative, Vos announced a legislative task force on "racial disparities, educational opportunities, public safety, and police policies and standards." Similar past initiatives on subjects such as homelessness and adoption have taken several months to produce legislation.

Meanwhile, Wisconsin Democrats are meeting Republicans' resistance to convene with anger and frustration.

"We've got 400 years of systemic racism in this country, and if we don't do something about it, we'll be repeating Kenosha in cities all over our country and in our state," Evers said Thursday. "I'm counting on the Republicans to show up next Monday."

Democratic state Sen. LaTonya Johnson of Milwaukee issued a statement last week that she was "sick to [her] stomach" at the GOP's resistance.

"The question for us, Wisconsin, is when are we going to make Republicans do their jobs, or do we continue to sit idly by and watch this state burn?" she said.

Late last week, a woman from Burlington, Wis., began a petition drive to try to recall Gov. Evers, citing in part his response to the aftermath of Blake's shooting. The state Republican Party is not affiliated, but state Democrats did sharply criticize the move.