Accessibility links
Trump Praises Law Enforcement On Kenosha Visit : Live Updates: Protests For Racial Justice The president went to the Wisconsin city where 29-year-old Jacob Blake, a Black man, was shot and seriously wounded by police and where two people were shot and killed in subsequent unrest. 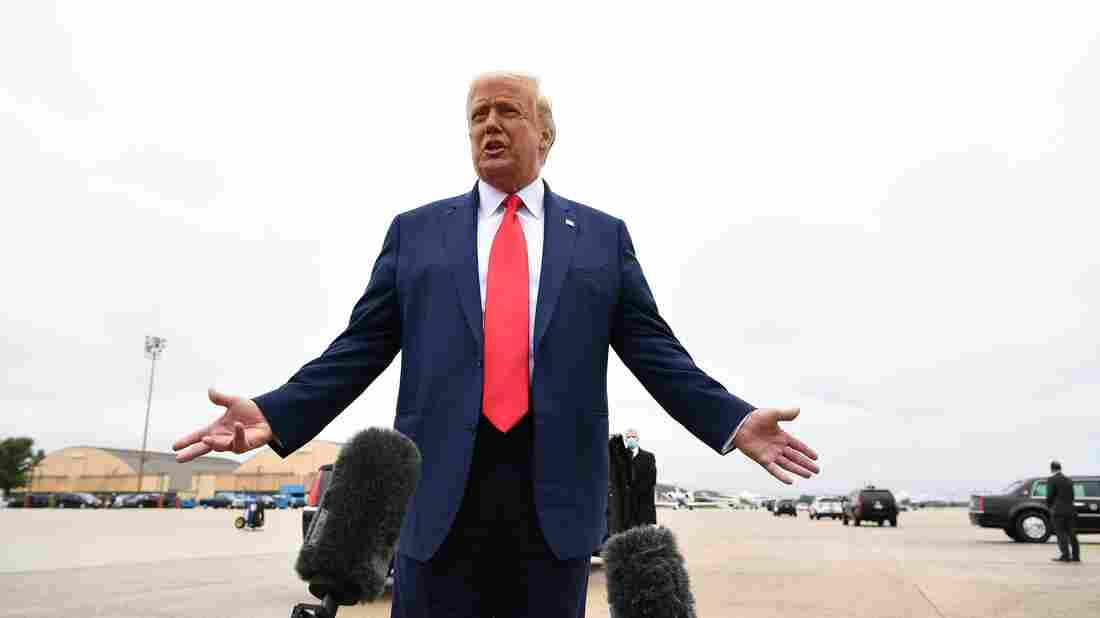 President Trump speaks to the media before heading to Kenosha, Wis., to meet with law enforcement officials and to survey damage following civil unrest in the city. Mandel Ngan/AFP via Getty Images hide caption 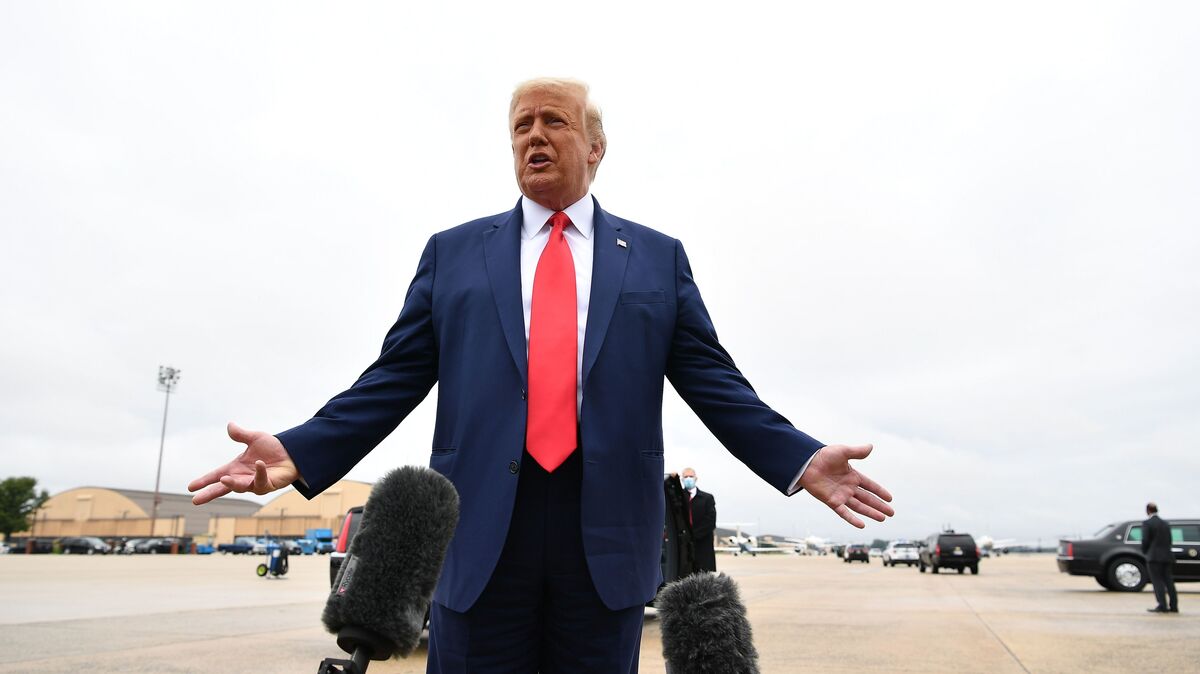 President Trump speaks to the media before heading to Kenosha, Wis., to meet with law enforcement officials and to survey damage following civil unrest in the city.

President Trump visited Kenosha, Wis., on Tuesday, a city roiled by unrest following the police shooting of Jacob Blake last month in a state seen as crucial to Trump's reelection prospects in November.

Trump went to an emergency management center, met with police and toured a section of the city damaged by rioting that followed the shooting of the 29-year-old Black man.

At a roundtable discussion with law enforcement and local leaders, Trump said the unrest in Kenosha was not "acts of peaceful protest, but really domestic terror." The conversation largely focused on Kenosha as a model for how local, state and federal law enforcement could work together to respond to riots.

Trump denounced unnamed "reckless far-left politicians" who continue to press the message that police are "repressive or racist." He called police "great, great people," although he said there were a few bad apples and repeated his characterization from an interview Monday night that some police officers do "choke" and make bad decisions under pressure.

"They choke sometimes, and it's a very tough situation," Trump said.

A reporter asked Trump whether he believes there is systemic racism in the U.S., and Trump responded, "You just keep getting back to the opposite subject. We should talk about the kind of violence that we've seen in Portland and here and other places. It's tremendous violence."

A seat at the table

Trump did not meet with Jacob Blake's family during his trip. Asked what he would have said to them, Trump said, "I feel terribly for anybody who goes through that," adding the shooting was under investigation. Trump said, "I didn't get to speak to the mother," but that "I hear she's a fine woman."

Trump said Monday that he did not plan to meet with Blake's family because he said such a meeting would include the family's attorney.

Blake's mother's pastor, James Ward, and his wife did participate in the roundtable. Sharon Ward said during the conversation that "it's important to have Black people at the table to help solve the problem." She added, "I think that this is a really good opportunity to solve the problem in the nation."

Trump on the shooters' actions

Two people were killed last week during the protests against racism and police brutality that followed Blake's shooting. Seventeen-year-old Kyle Rittenhouse has been charged with six criminal counts, including first-degree intentional homicide. Rittenhouse, who is white, is a staunch law enforcement supporter.

Trump appeared to defend Rittenhouse on Monday, saying, "He was trying to get away from them, I guess, it looks like."

While an investigation into that shooting is also ongoing, Trump said, "I guess he was in very big trouble. He probably would have been killed." Trump did not elaborate on what kind of trouble Rittenhouse may have been in.

How Wisconsin Voters Are Responding To Trump's 'Law And Order' Message

As for the police shooting Blake multiple times at close range, which left Blake paralyzed from the waist down, Trump has avoided directly condemning law enforcement actions. In an interview with Fox's Laura Ingraham on Monday, Trump compared the police shooting to a mistake in a golf tournament.

"Shooting the guy in the back many times," he said, "I mean, couldn't you have done something different, couldn't you have wrestled him? You know, I mean, in the meantime, he might've been going for a weapon. You know there's a whole big thing there, but they choke. Just like in a golf tournament, they miss a 3-foot putt."

Trump, who has been campaigning on a "law and order" theme, blamed local officials for the unrest in Kenosha and other cities this summer. Demonstrators across the country have been protesting police violence and systemic racism.

Wisconsin's governor and Kenosha's mayor urged Trump to put off his visit, saying the city needs time to heal.

In an interview with NPR's All Things Considered on Tuesday, Wisconsin Lt. Gov. Mandela Barnes explained his own opposition to Trump's visit.

Barnes said Trump is trying to "politicize people who are stepping up and demanding racial justice. Donald Trump doesn't want to hear that."

"He is going to use every opportunity that he can to divide the people of this state, as this is a critical state for his reelection, and it's unfortunate because you know these are real lives that we're talking about," he said.

Wisconsin is a key battleground state this fall. Trump narrowly won it in 2016, and Democrats are fighting to return the state to their column.

Asked Monday whether Trump chose to visit Wisconsin because of its political importance, White House press secretary Kayleigh McEnany said, "The president is showing up to see hurting Americans."