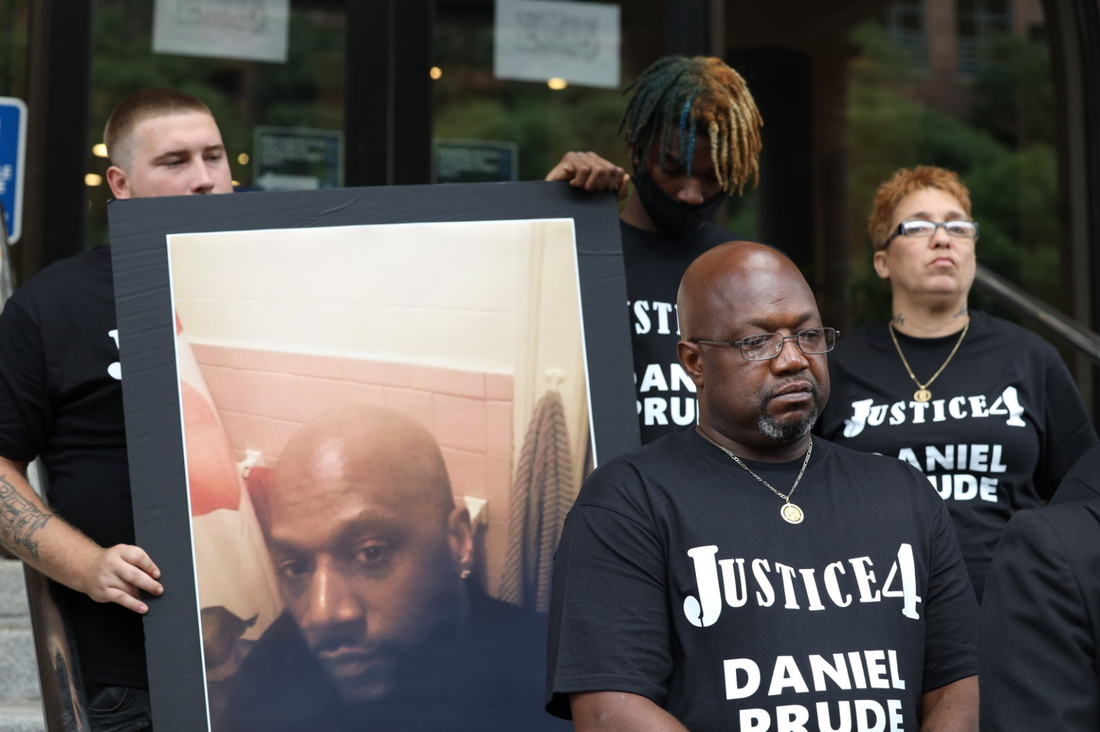 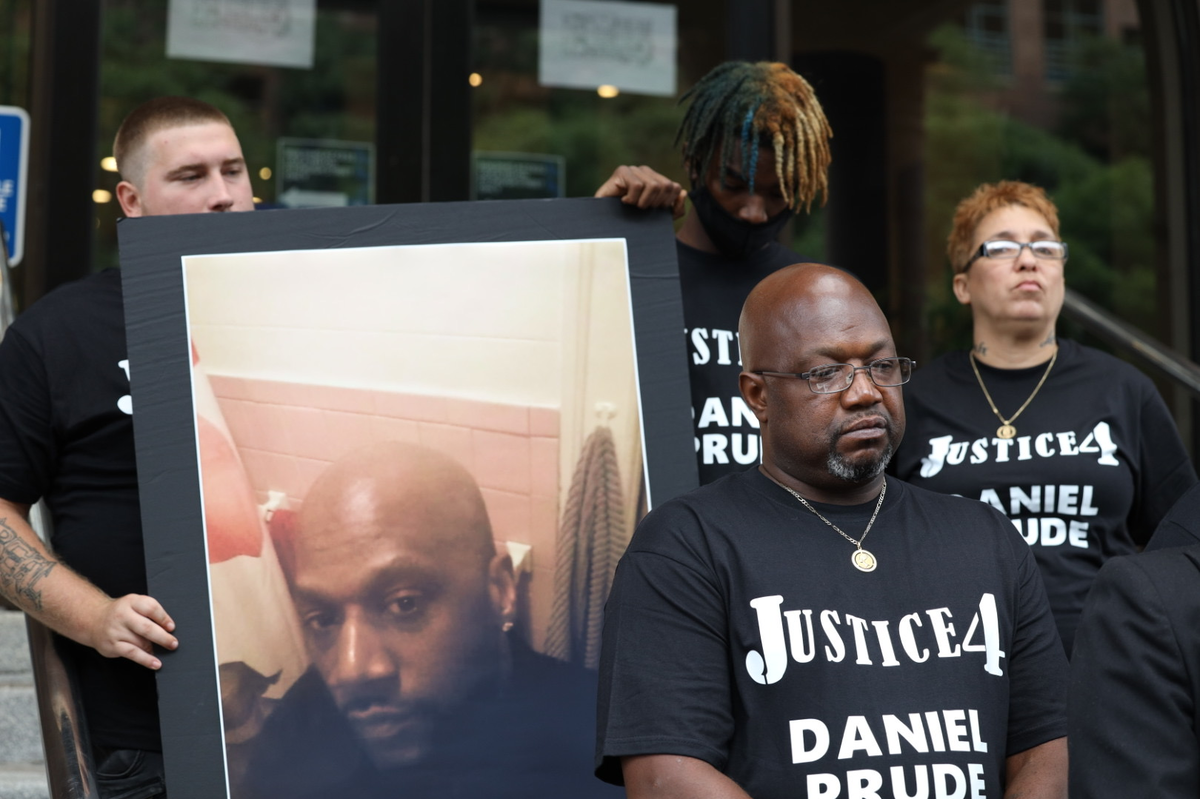 Joe Prude announces plans to sue over the death of his brother, Daniel Prude, while outside Rochester, N.Y., City Hall on Wednesday.

The mayor of Rochester, N.Y., has ordered the immediate suspension of seven police officers over the death of Daniel Prude, a Black man who died of asphyxiation after being restrained during his arrest in March.

Police body camera footage of the encounter was released Wednesday, prompting protests and calls for transparency and justice.

In a press conference Thursday afternoon, Mayor Lovely Warren announced she is suspending the officers in question with pay. She said she did so "against the advice of counsel," noting the police union could respond by suing the city.

Warren said Prude had been failed "by our police department, our mental health care system, our society ... and by me."

She also said institutional and structural racism had led to Prude's death.

"I believe that if Daniel Prude was white all of those systems would not have failed him," Warren said. "It is time that we stopped trying to not acknowledge this and call it for was it is. It's racism."

Rochester police arrested Prude in the early hours of March 23 after his brother, concerned about his sibling's safety, had called 911. Prude, 41, had left his brother's house in below-freezing temperatures wearing long johns and a tank top. He had been released from Rochester's Strong Memorial Hospital earlier that night after expressing suicidal thoughts.

When Rochester police officers came upon Prude, he was naked and in distress. Prude had allegedly just gone on a destructive tear, according to police reports, smashing out the windows of storefronts and ranting about having the coronavirus. A passing tow truck driver who called 911 described Prude as being covered in blood. 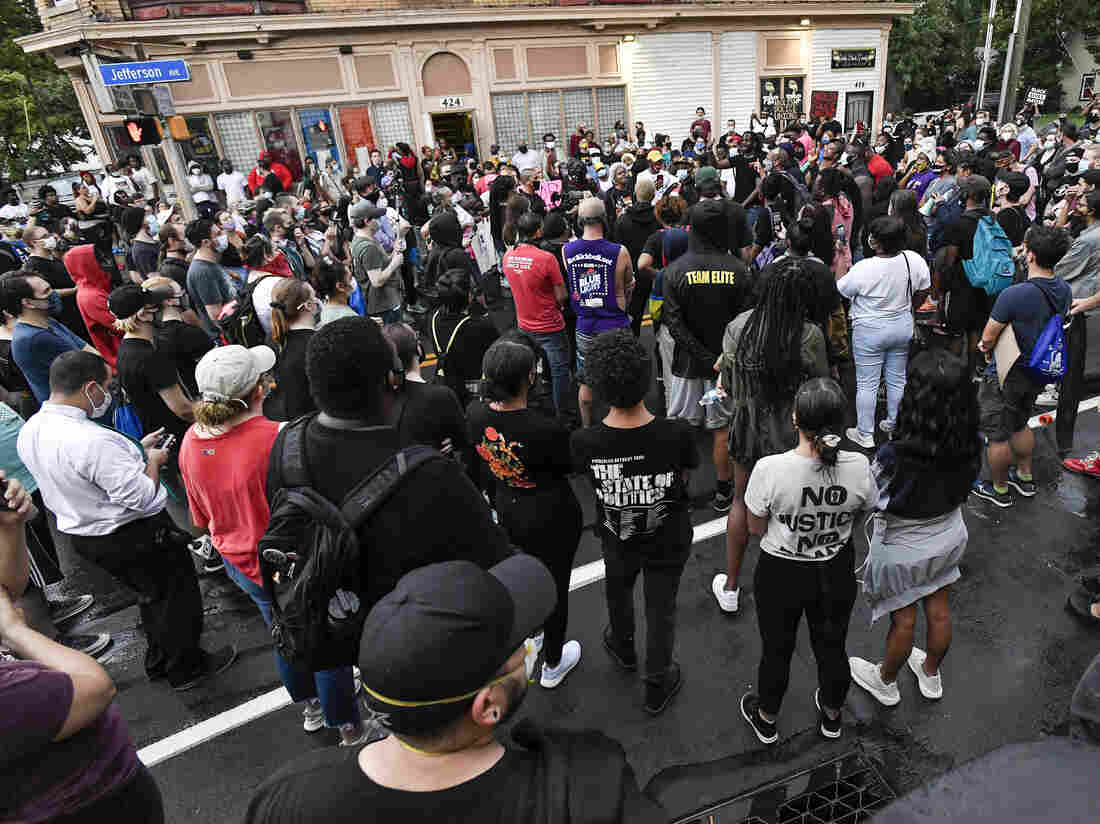 Protesters gather Wednesday in Rochester near the site where police officers restrained Daniel Prude in March. Prude died a week after the encounter with police. Adrian Kraus/AP hide caption 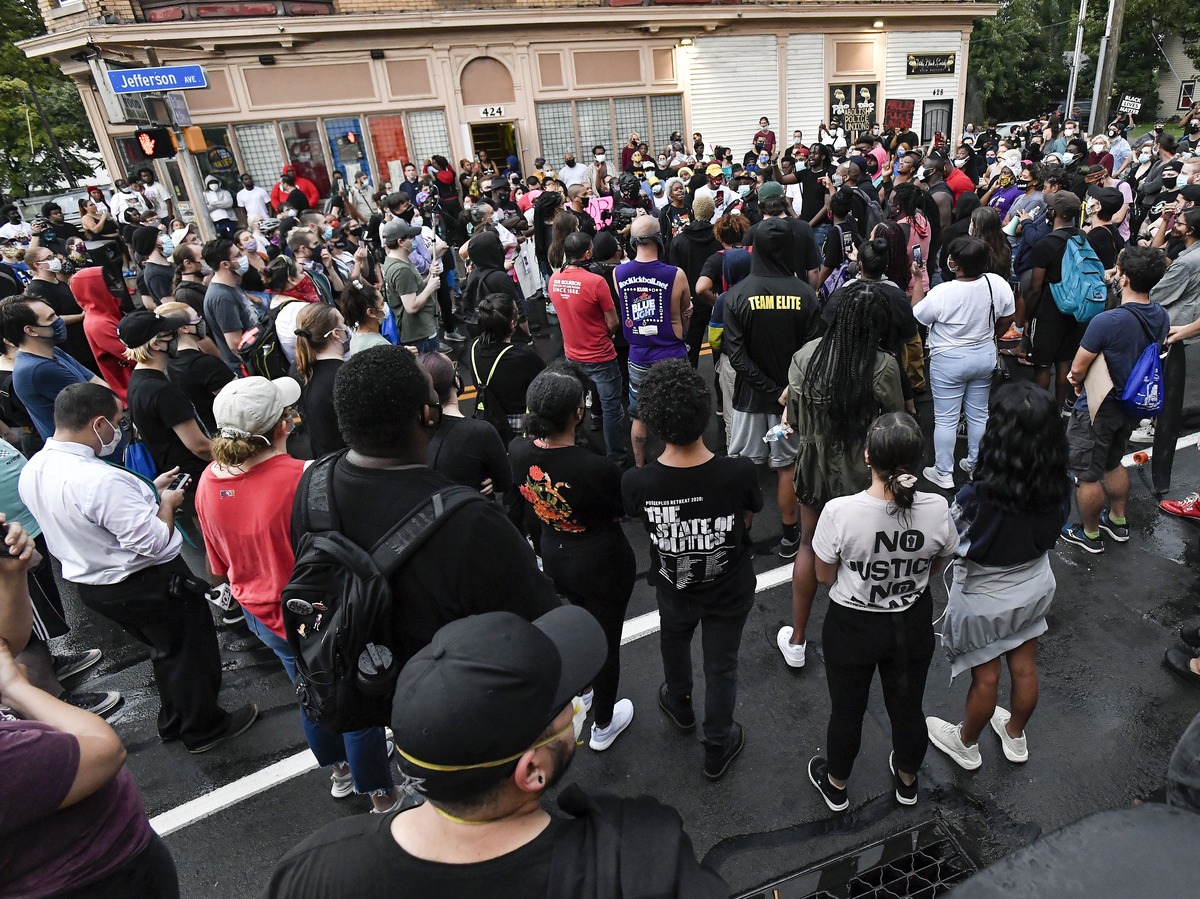 Protesters gather Wednesday in Rochester near the site where police officers restrained Daniel Prude in March. Prude died a week after the encounter with police.

The police bodycam footage shows officers, with Tasers drawn, confronting Prude and ordering him to lie down on the road, which was slick from a light snowfall. Prude complied, lying facedown on his stomach, and officers cuffed his hands behind his back.

But in time, the 5-foot-10-inch, 230-pound man grew agitated. He began yelling vulgarities, spitting at officers and tried, unsuccessfully, to stand up. Officers ordered him several times to return to the prone position before placing a white hood over Prude's head, known as a "spit hood" and intended to protect others from possible infection.

Officers restrained Prude by holding him down by his feet and his head, and applying pressure to his back with a knee. Prude eventually fell unconscious and stopped breathing, according to police reports. He died a week later.

The Monroe County Medical Examiner's Office ruled the cause of death as "complications of asphyxia in the setting of physical restraint due to excited delirium due to acute phencyclidine intoxication." And the "manner of death" was ruled as "homocide."

Prude's family obtained the footage through a public records request. Attorneys representing the family released it to the public. The family intends to file a wrongful death suit, claiming the actions police used to restrain Prude caused his death. 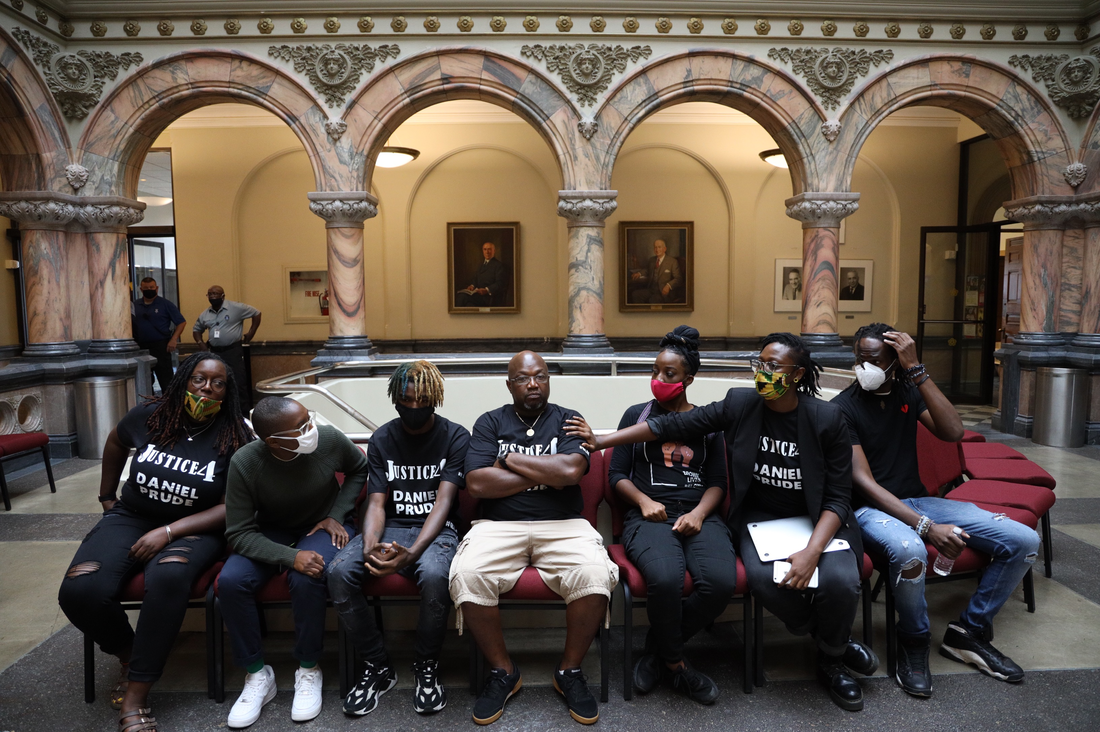 Protesters and community leaders charged that police and the mayor have attempted to sweep Prude's death under the rug.

At a second press conference at Rochester's Public Safety Building where police headquarters is located, Warren said an ongoing investigation by the New York attorney general's office took the matter out of the city's hands.

"This is not something in our wheelhouse, in our control at this moment in time," Warren said. "Had it been, this is something we would have talked about months ago."

"The rhetoric that this is a cover-up, this is not," said Rochester Police Chief La'Ron Singletary. "You know we don't have a problem holding anyone accountable, but the investigation has to take its course."

A protest Wednesday began small at the Monroe County Public Safety Building but gained momentum throughout the day. By midafternoon, police fired pepper spray and tear gas into a small crowd outside police headquarters.

The protest later moved to where Prude was arrested, and a large block party gradually formed. Organizers said they plan to occupy the space until the officers involved in Prude's arrest are fired and the city bars police from responding to mental health calls, among other demands.

"We want the larger community to know this is not something that happens in other cities, in other states, it happens right here in Rochester," said Ashley Gantt, an organizer with the local Black Lives Matter group Free the People Roc.

At the Thursday afternoon press conference, Warren said she was told that Prude had overdosed in police custody, and did not see video of the encounter until Aug. 4.

She said she has since ordered Singletary to provide her with video from any in-custody death or use of force incident within 24 hours.

Warren also said she will work to increase funding for mental health programs for 911 calls and called for charges filed against protesters on Wednesday to be dropped.

Those were among the demands in a letter sent to Warren by the Rochester City Council earlier Thursday, calling for stronger actions in response to Prude's death.