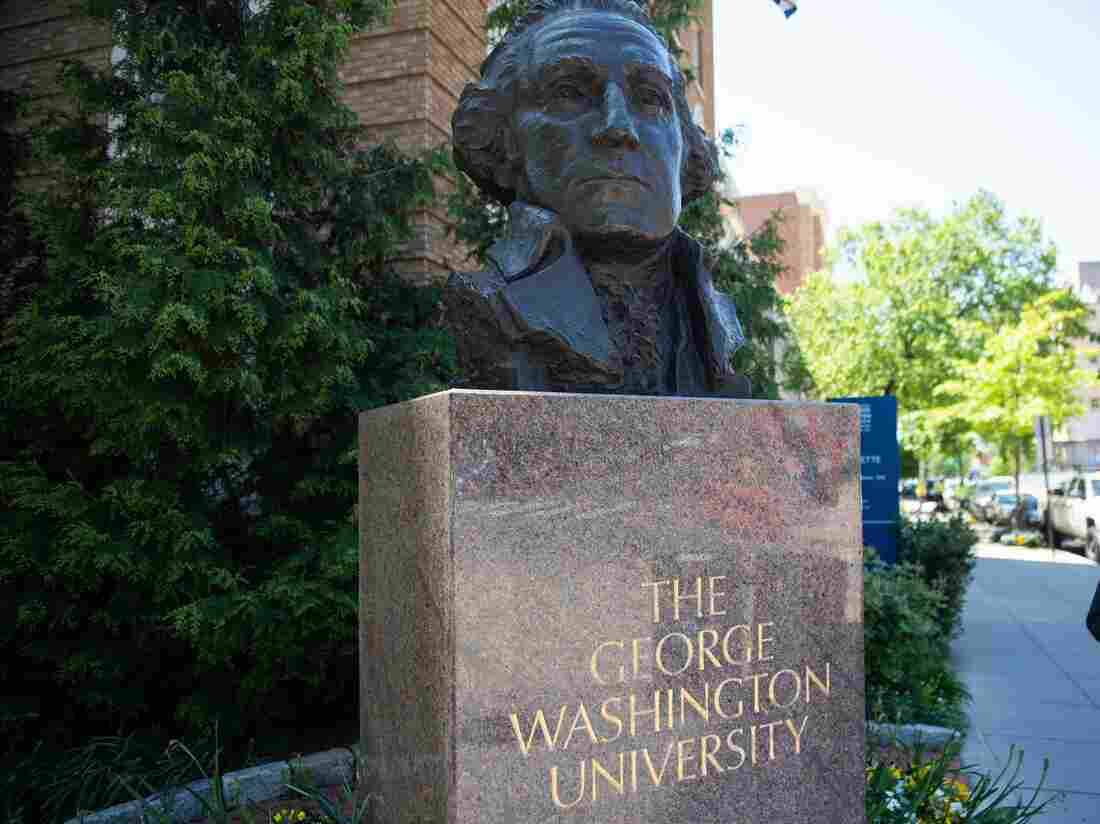 George Washington University is "looking into the situation" of history professor Jessica A. Krug, after a blog post written under that name said that she had invented her Black Caribbean identity, despite actually being white. Saul Loeb/AFP via Getty Images hide caption 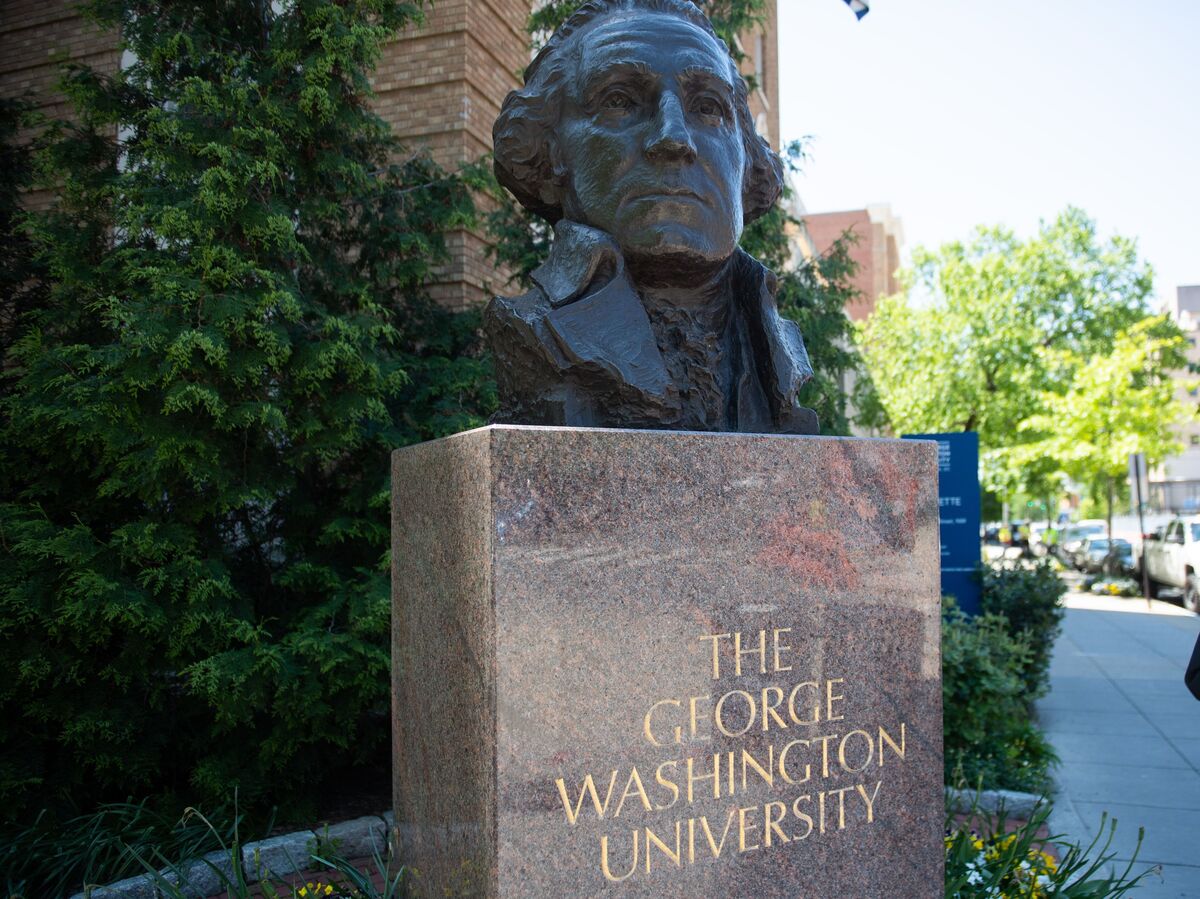 George Washington University is "looking into the situation" of history professor Jessica A. Krug, after a blog post written under that name said that she had invented her Black Caribbean identity, despite actually being white.

In a post published Thursday on the website Medium, a person under the name Jessica A. Krug writes that she is white and grew up in the Midwest, but lied to others in presenting herself as having a Black Caribbean identity.

"To an escalating degree over my adult life, I have eschewed my lived experience as a white Jewish child in suburban Kansas City under various assumed identities within a Blackness that I had no right to claim: first North African Blackness, then US rooted Blackness, then Caribbean rooted Bronx Blackness," the post says. "People have fought together with me and have fought for me, and my continued appropriation of a Black Caribbean identity is not only, in the starkest terms, wrong — unethical, immoral, anti-Black, colonial — but it means that every step I've taken has gaslighted those whom I love."

Jessica A. Krug is the name of an associate professor at George Washington University in Washington, D.C. Krug did not immediately reply to an NPR request for confirmation that she wrote the post.

Krug's faculty page identifies her as a historian of politics and cultural practices in Africa and the African Diaspora, with a particular interest in West Central Africa and Black transnational cultural studies. Last year, her book Fugitive Modernities, published in 2018 by Duke University Press, was a finalist for the Frederick Douglass Book Prize and the Harriet Tubman Prize.

In a statement, Provost and Executive Vice President for Academic Affairs M. Brian Blake and Paul Wahlbeck, Dean of the Columbian College of Arts and Sciences wrote: "While the university reviews this situation, Dr. Krug will not be teaching her classes this semester." And, "We want to acknowledge the pain this situation has caused for many in our community."

In a July 2019 article for Essence magazine, Krug wrote:

"I am boricua, just so you know. Boricua, not Puerto Rican, to reflect the name by which the indigenous people knew the island before Columbus invaded.

And just so you know—you, fellow boricua, you, fellow colonized people of all nations, from the South Bronx to San Juan, from Ponce to Palestine:

Another world is possible."

At the end of the article, her bio says: "Jessica A. Krug is an unrepentant and unreformed child of the hood. ... Much of her time, energy, and all of her heart are consumed in the struggle for her community in El Barrio and worldwide, whether against the violence of the state as manifest by police, the encroaching colonialism of gentrification, or around issues of community health and environmental justice."

RaceBaitr, a website that publishes articles on race, said Thursday that it had removed Krug's work from its site.

"Her charade has taken her into many Black sacred spaces, including this one. We apologize for platforming her work, and not taking seriously enough some of your warnings. Keeping black spaces safe is our highest priority and we failed this time, but we will do better," the site said in a tweet.

The editor-in-chief of RaceBaitr, Hari Ziyad, wrote on Twitter that Krug had called him on Thursday and "admitted to everything" that was written in the Medium post. "She didn't do it out of benevolence. She did it because she had been found out," Ziyad said.

A person who didn't wish to be identified told NPR they recently informed editors who publish Krug's work online and others who work with her about possible discrepancies in her personal story. After receiving a tip that Krug was actually from Kansas City, they searched online and found what they believed to be Krug's parents' obituaries in that region.

The person requested anonymity because they feared repercussions in their profession and did not wish to be publicly associated with the controversy.

The situation recalls that of Rachel Dolezal, a white woman who identified as Black. She was the head of the NAACP chapter in Spokane, Wash., until her parents came forward and said she had no Black roots.

In 2017, the Studio Museum in Harlem posted a video from one of its programs that includes a woman who identifies herself as Jess Krug of Harlem CopWatch, and seemingly recounts vivid memories of police brutality in a Bronx childhood.

"Growing up, there's no escape from police violence, really," she says. "Some of my earliest memories in life are of police brutality. I remember one summer when I was about five, walking from the park with my brother, who was about 12 at the time, right, and having the police throw him down on the ground. ... So that's been my whole life."

"When I was a little bit older but not too much, they shot Amadou Diallo around the corner from my home, right. For those of you who weren't in New York City at the time, or might not remember, he was the man who was shot 41 times," Krug says. "Is there any level of this violence that's acceptable? No, but there's the particular kind of choreography to the ways in which we're slaughtered."

Chaédria LaBouvier, an art historian, says she met Krug on a panel in early 2017 and they spoke afterwards. "Her accent seemed off to me, and the clothing and whole performative element of 'hood' identity," LaBouvier said in an email to NPR. LaBouvier says that Krug told her "Jess La Bombalera" was her "salsa name."

In a New York City Council public hearing in June about police brutality conducted over Zoom, a woman identifies herself as Jess La Bombalera in "El Barrio, East Harlem." Her accent seems to shift throughout.

"I also want to call out all these white New Yorkers, who waited for hours with us to be able to speak and then did not yield their time to Black and brown indigenous New Yorkers," the woman says. (Warning: This video contains profanity.)

Yomaira Figueroa, an associate professor of global diaspora studies at Michigan State University, says that questions had been raised about Krug's identity recently, and she believes that "rather than be revealed, she decided to reveal herself."

Figueroa is herself Black Puerto Rican, and the author of the forthcoming book Decolonizing Diasporas. She has not met Krug personally, but points to stories that have emerged since Thursday in which other scholars and activists recall Krug saying her parents were addicts and her mother was a sex worker.

Krug's apparent deception was personally hurtful to her, Figueroa says. "The very first night that I learned about it, I couldn't sleep," she says. "Because I just thought how awful it was that someone was perpetrating this identity, but not only that. Kind of preying on the white imagination, and pulling from some of the worst stereotypes that there are about black people and Puerto Rican people, and using that as a cloak for her identity."

Yarimar Bonilla, a professor of anthropology at Hunter College and at the City University of New York, compared Krug's alleged false identity to a minstrel show, recalling that Krug would "show up to a 10am scholars' seminar dressed for a salsa club" and would frequently pan the work of actual women of color.

"She absolutely took up some of the very few — very few — resources and spaces that there are available to Black and Latino scholars and use those to her advantage," she says. "There absolutely has to be a form of restitution for the things that she took. It's egregious."

Figueroa says the university will need to look at whether Krug was hired in part to bring diversity to the university faculty, and whether she was granted tenure on the basis of lies.

"She is a really well respected historian. She does really good work. But she is occupying a space that she got through deception."