Accessibility links
No Charges Against Tucson Police Officers In Death Of Carlos Ingram-Lopez : Updates: The Fight Against Racial Injustice He died in April after being handcuffed and held face-down in a garage with two plastic emergency blankets and a "spit sock hood" over his head. 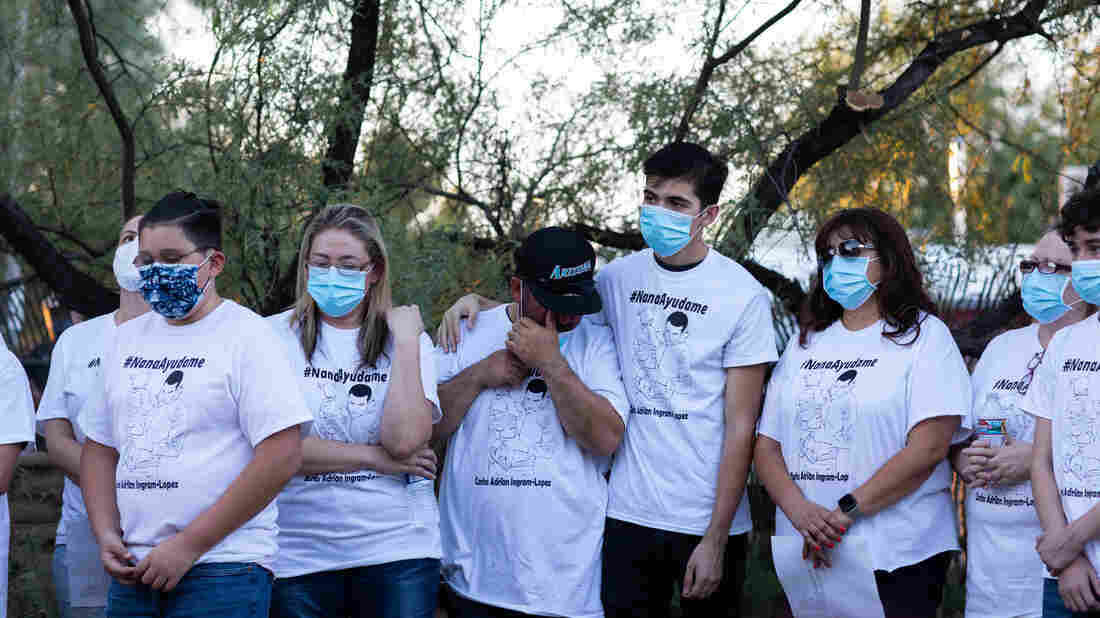 Community members and family wear shirts that read "Nana Ayudame or Nana, help me" in Spanish at a vigil for Carlos Ingram-Lopez on June 25 in Tucson, Ariz. Prosecutors have declined to pursue criminal charges over his death in police custody. Caitlin O'Hara/Getty Images hide caption Community members and family wear shirts that read "Nana Ayudame or Nana, help me" in Spanish at a vigil for Carlos Ingram-Lopez on June 25 in Tucson, Ariz. Prosecutors have declined to pursue criminal charges over his death in police custody.

"There is insufficient evidence to prove negligent or reckless homicide" in the death of Carlos Ingram-Lopez in April, prosecutors in Pima County, Ariz., say, opting against criminal charges despite finding that Tucson police officers who placed him in custody failed to follow protocol and created an "unjustifiable risk."

Ingram-Lopez, 27, died after being handcuffed and held face-down in a garage for some 12 minutes. For much of that time, police kept two plastic emergency blankets and a "spit sock hood" over his head.

The case sparked public protests in Tucson this summer, prompting Police Chief Chris Magnus to offer to resign as details emerged about the fatal encounter. The city opted not to accept his resignation.

The Pima County Attorney's Office announced its decision not to pursue charges in a 14-page letter to Magnus. In it, they cite inconclusive findings in medical opinions about what caused Ingram-Lopez's death.

Toxicology tests were positive for cocaine. The county medical examiner concluded that Ingram-Lopez' death was caused by "sudden cardiac arrest in the setting of acute cocaine intoxication and physical restraint," with an enlarged heart as "a significant contributing condition."

But an independent autopsy commissioned by Ingram-Lopez's family asserted that the cocaine wasn't enough to explain the death. That report, by forensic pathologist Dr. Phillip Keen, added that the circumstances were "consistent with an asphyxia event (suffocation)."

But prosecutors noted that Keen has separately been named in criminal charges alleging perjury, adding that an agreement related to those charges precludes him from testifying in any criminal case.

Officers had been called by Ingram-Lopez's grandmother, who told a 911 operator that she wanted help getting him out of her home because her grandson was "crazy" and on drugs and was not wearing any clothes.

The prosecutor's office says, "the failure of the officers to call for paramedics immediately, and leaving Mr. Ingram-Lopez on his stomach in the prone position with his arms handcuffed behind his back for several minutes without checking on his breathing and attending to him were gross deviations from the standard of care these officers were trained to provide."

The officers "should have been aware of the potential risk of death," the report states.

Ingram-Lopez died one month after the in-custody death of another man, Damien Alvarado, 29, in Tucson. A review board of experts and community members recently issued more than 50 recommendations for the police department, hoping to avoid similar cases in the future.

"Insufficient training, a lack of Spanish-speaking 911 dispatchers and the use of spit socks to protect officers from COVID-19 were some of the 32 factors that contributed to the in-custody deaths," Arizona Public Media reported.

"In Ingram-Lopez's case, the dispatcher didn't speak Spanish and didn't relay details from his grandmother about his drug ingestion," APM said. "The board concluded that, along with other missteps, led officers to approach the situation with an arrest mentality as opposed to an assist mentality."

The three officers who were the first to reach the scene — Jonathan Jackson, Samuel Routledge and Ryan Starbuck — all resigned as the incident was being investigated. Chief Magnus later said they would have been fired anyway, as their actions fell short of department standards.

"I cannot stress strongly enough that I feel terrible about the death of Carlos Ingram-Lopez during his encounter with officers from our department," Magnus said in an email to NPR this summer.