Accessibility links
Swastika, New York, Is Keeping Its Name : Updates: The Fight Against Racial Injustice When an outsider suggested the tiny northern hamlet of Swastika should change its name, town supervisors quickly rejected a change. 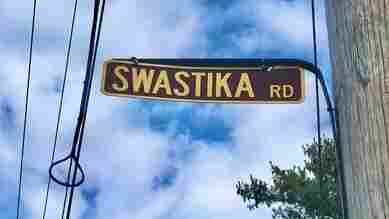 Michael Alcamo lives in New York City but loves cycling through the Adirondack Mountains in northern New York, with their tiny towns and hamlets and historical cemeteries.

He was on a trip like this, winding through a remote stretch this summer, when he noticed something else, a small brown street sign with the name "Swastika."

At a time when symbols and place names with links to white supremacy are being debated across the U.S., Alcamo found the name of the unincorporated hamlet he had crossed into unsettling.

"So the effect was just jarring and profoundly, I thought, disrespectful," he said, especially to the veterans of World War II with graves nearby.

"I think it should be obvious that the town should update its name and should pick a name that is not so offensive to so many Americans and so emblematic of intolerance, hate and tyranny," he said.

So Alcamo reached out to county officials in August to see if they would consider it. He was soon directed to email the town of Black Brook, a town of about 1,500 residents with jurisdiction over Swastika.

The town agreed to add it to their agenda for their meeting this month. And after five minutes of discussion at their Sept. 14 meeting, the town's four councilors unanimously voted against it.

"Swastika was named by the founders of the area who settled there," said Jon Douglass, Black Brook's supervisor, who was at the meeting but didn't have a vote.

None of the councilors returned a request for comment.

Douglass says the hamlet's name far predates World War II and came from the Sanskrit word meaning well-being. The four-sided geometric character that represents the swastika has been used for thousands of years in Indian religions and seen as a symbol of good luck.

The swastika's meaning was overshadowed beginning in the 1930s with the rise of Adolf Hitler, who co-opted the figure as a symbol for Nazism and anti-Semitism.

Douglass says this is not the first time the hamlet's name has been scrutinized.

"There was concern that due to the Germans and everything that people may have a different outlook on the name. And some of the residents that were from that area actually fought in World War II and refused to change the name just because Hitler tried to tarnish the meaning of swastika," he said.

Douglass says the council did not see a reason to change the name despite its widespread use as a symbol of hate and white supremacy today.

"I think that's probably, maybe some viewpoint that it's associated with hate. But then I believe there are others that do not associate it with hate," he said. "Did the Hindus and the [Buddhists] and all them, did they erase it from their religious history because of the Germans?"

Alcamo, the cyclist who submitted the request, was disappointed by the town's reaction.

"I didn't expect a quick, unanimous vote to reject the proposal," he said.

Social media response to the decision has been murkier, with some locals of the region bristling on Facebook at an outsider from New York City trying to meddle in rural affairs.

But Alcamo says he simply wants more people to see the Adirondacks for their natural beauty and deep history, a history he says is at odds with the meaning of swastika today.