Accessibility links
Breonna Taylor Update: Denver Police Detain Man After Car Plows Through Protest Area : Updates: The Fight Against Racial Injustice The protesters were starting to disband near the Colorado state Capitol. Some of them blocked the vehicle before it abruptly sped away. 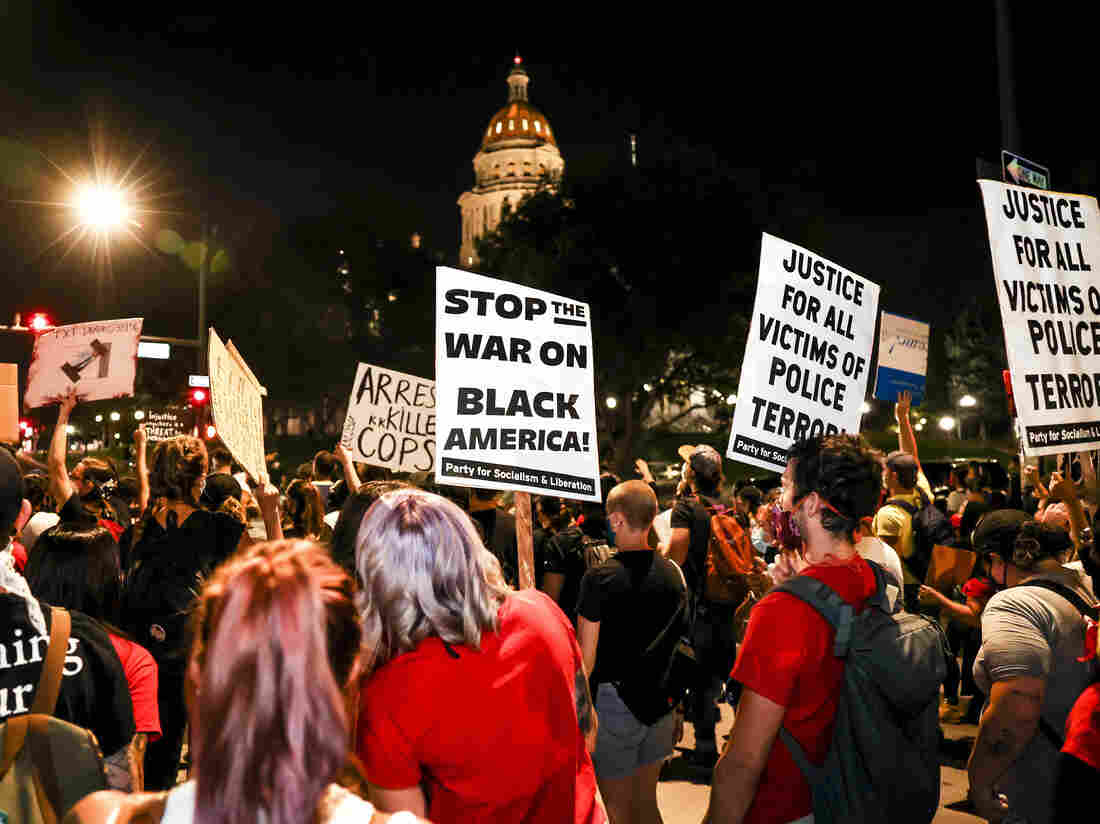 People protest the grand jury decision in the Breonna Taylor case in front of the Colorado state Capitol in Denver on Wednesday. As the protest was breaking up, a motorist drove through a small crowd of protesters who had yelled at the driver to turn around. Michael Ciaglo/Getty Images hide caption

Denver police detained a man after a vehicle plowed through a crowd of people demonstrating for justice in the Breonna Taylor case. The protesters were gathered near the Colorado state Capitol. Some of them had blocked the vehicle, which then sped away.

The incident, which came as people were leaving a large protest, was caught on video by Denver Post reporter Shelly Bradbury. Her recording shows a small group of people were thronged around a silver Volvo SUV, which abruptly accelerated, sending at least one woman to the ground and running over her bicycle.

"The person who was hit, Kate, said she is not badly hurt. Her wrist is scraped up," Bradbury said via Twitter.

"A car hits protester moments after we started to disperse," activist and Denver School Board member Tay Anderson said on Twitter.

In response to that tweet, state Rep. Leslie Herod asked Denver Mayor Michael Hancock and District Attorney Beth McCann if the motorist would face any repercussions.

Other footage from the scene shows that as the Volvo drove up to the area of Broadway and Colfax Avenue, protesters began blocking his path, shouting for him to turn around. The driver stopped and rolled down his window to yell back and forth with members of the crowd, as the tense situation escalated.

The Volvo sped off, but the Denver Police Department later announced, "One male has been detained."

The protesters had been part of a larger group that marched through Denver's streets Wednesday night, voicing outrage over the decision to indict only one of the three Louisville, Ky., police officers who played a role in the shooting death of Taylor in March. The officer was charged with three counts of wanton endangerment over shooting into neighboring apartments.

Several U.S. cities have seen clashes between drivers and protesters this summer, as people took to the streets in support of racial justice and against police brutality.

"It's at least the third time a driver has struck someone during a protest in Denver this year," the Denverite site reports. "On May 28, the first day of local protests over George Floyd's death, a driver hit a protester. Days later, another driver struck three officers and a bystander at a protest over racism and police brutality."