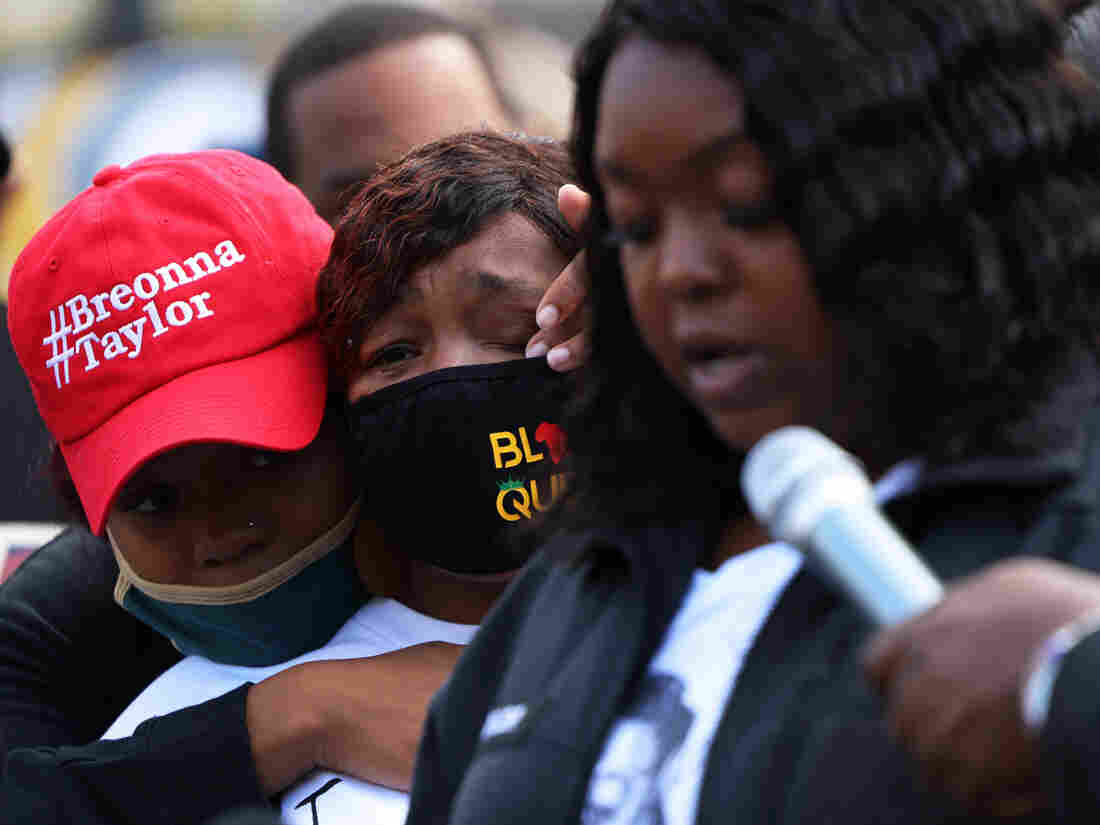 "You didn't just rob me and my family, you robbed the world of a queen," Breonna Taylor's mother, Tamika Palmer, said in a statement read aloud Friday by Palmer's sister, Bianca Austin. In this photo, Ju'Niyah Palmer is seen wiping away tears from her mother's face. Michael M. Santiago/Getty Images hide caption 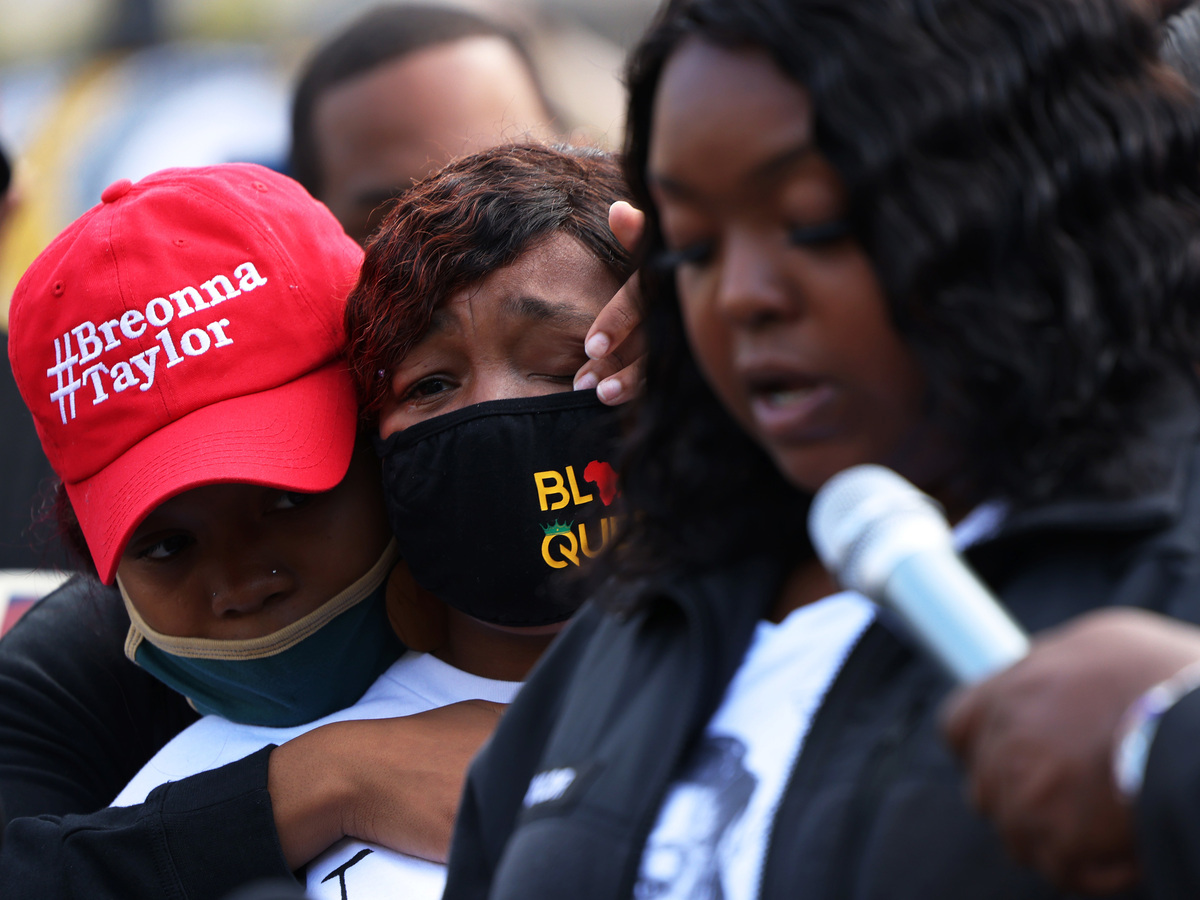 "You didn't just rob me and my family, you robbed the world of a queen," Breonna Taylor's mother, Tamika Palmer, said in a statement read aloud Friday by Palmer's sister, Bianca Austin. In this photo, Ju'Niyah Palmer is seen wiping away tears from her mother's face.

The justice system failed Breonna Taylor, says Tamika Palmer, the mother of the emergency room technician whom police shot and killed in her own apartment in March. She says Kentucky's attorney general was not up to the job of achieving justice for Taylor.

"I never had faith in Daniel Cameron to begin with," Palmer said, via a statement that was read aloud by her sister, Bianca Austin, during a news conference Friday at Louisville's Jefferson Square Park. Palmer stood by, weeping, as Austin voiced the words that Cameron is too inexperienced and had failed her daughter by shifting responsibility to a grand jury.

"I was reassured Wednesday of why I have no faith in the legal system, in the police, in the law," Palmer said in the statement. "They are not made to protect us Black and brown people."

It was the family's first public address since Cameron announced Wednesday that a grand jury had declined to directly charge three Louisville police officers over Taylor's death.

The only current or former officer facing criminal charges related to the night when police burst into Taylor's home and shot her to death is Brett Hankison, who was fired from the police force in June. He faces three counts of wanton endangerment related to shooting into apartments adjacent to Taylor's.

"When I speak on it, I'm considered an angry Black woman," Palmer said in her statement. "But know this: I am an angry Black woman. I am not angry for the reasons that you would like me to be — but angry because our Black women keep dying at the hands of police officers. And Black men."

As Austin spoke on Palmer's behalf, she wore her niece's work jacket, with Taylor's name emblazoned on the chest. She stood alongside Jacob Blake Sr., the father of Jacob Blake, who was shot in the back by police in Kenosha, Wis., in August.

"This has been emotionally, mentally and physically draining for my sister," Austin said, calling the past six months "a wild roller coaster" for a family that has lost not only a beloved young woman to police gunfire, but other members to causes such as cancer, COVID-19 and violence.

Hours before the grand jury's decision was announced Wednesday, Palmer posted an image to her Instagram account promising, "Dear Breonna, Justice is coming."

Palmer says Cameron in his handling of the case failed to deliver that justice.

"What he helped me realize is that it will always be us against them, that we are never safe when it comes to them."

Cameron said Wednesday that state investigators couldn't determine which of the three officers — Hankison, Sgt. Jonathan Mattingly and Detective Myles Cosgrove — fired the fatal shot. But he said an FBI analysis had concluded that it was Cosgrove's round that killed Taylor.

Cameron said his office determined Mattingly and Cosgrove "were justified in their use of force," because they had first been fired upon by Taylor's boyfriend, Kenneth Walker. But Benjamin Crump, one of the family's attorneys, notes that Walker has said he was acting in self-defense.

In Crump's interpretation, the grand jury's indictment punishes one officer for missing a Black body — but it forgives others for shooting Taylor.

Crump reiterated his call for Cameron to release transcripts from the grand jury proceedings related to the case.

When Louisville Mayor Greg Fischer was asked Thursday about the potential release of records related to the investigation, he said the city is working with the attorney general and the FBI "to understand what we can release so it doesn't interfere with any of the ongoing investigations" into Taylor's death.

"What we want to do is get as much of this information out as soon as we can," Fischer said. "There does need to be some redaction of names to protect individuals' identities in some of these cases. So that process has started and we hope to be able to announce further information on that soon."

Scott, who is the only Black woman serving in Kentucky's Legislature, was arrested as police surrounded the First Unitarian Church on Fourth Street, according to WFPL.

The church had opened to offer sanctuary to protesters. Houses of worship are exempt from the city's curfew rules that were announced this week, though the rule states that they're able to be open after curfew "for services."

Louisville will remain under a nighttime curfew through the weekend. It runs from 9 p.m. to 6:30 a.m. the following morning.