Accessibility links
Court Releases Grand Jury Recording In Breonna Taylor Case : Updates: The Fight Against Racial Injustice The recording could answer lingering questions about how prosecutors have handled a case that has fueled protests in Kentucky and across the nation. 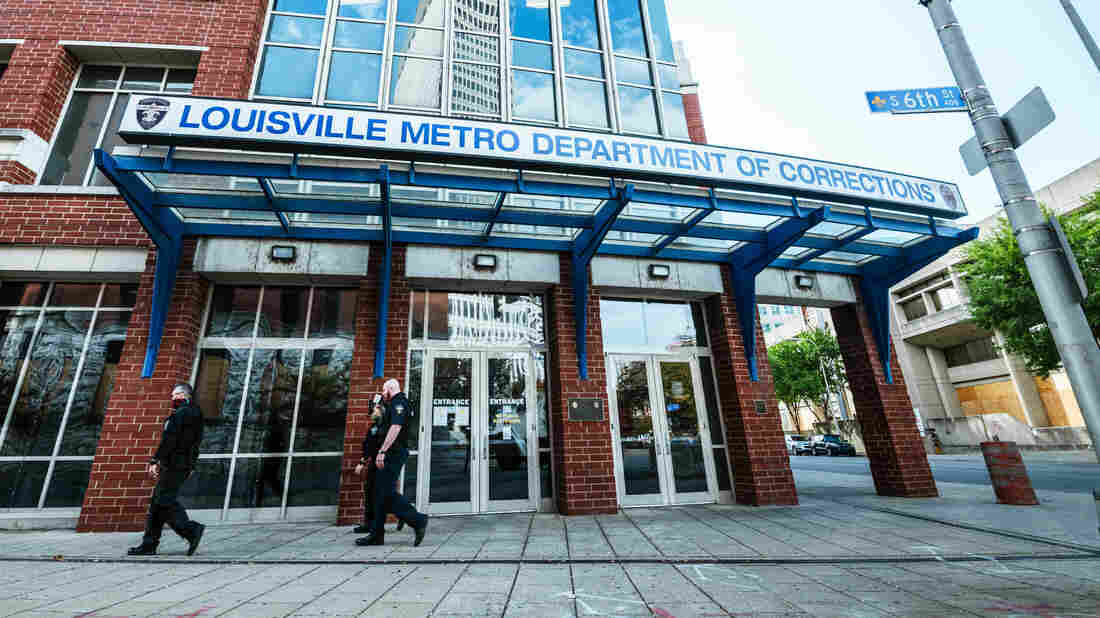 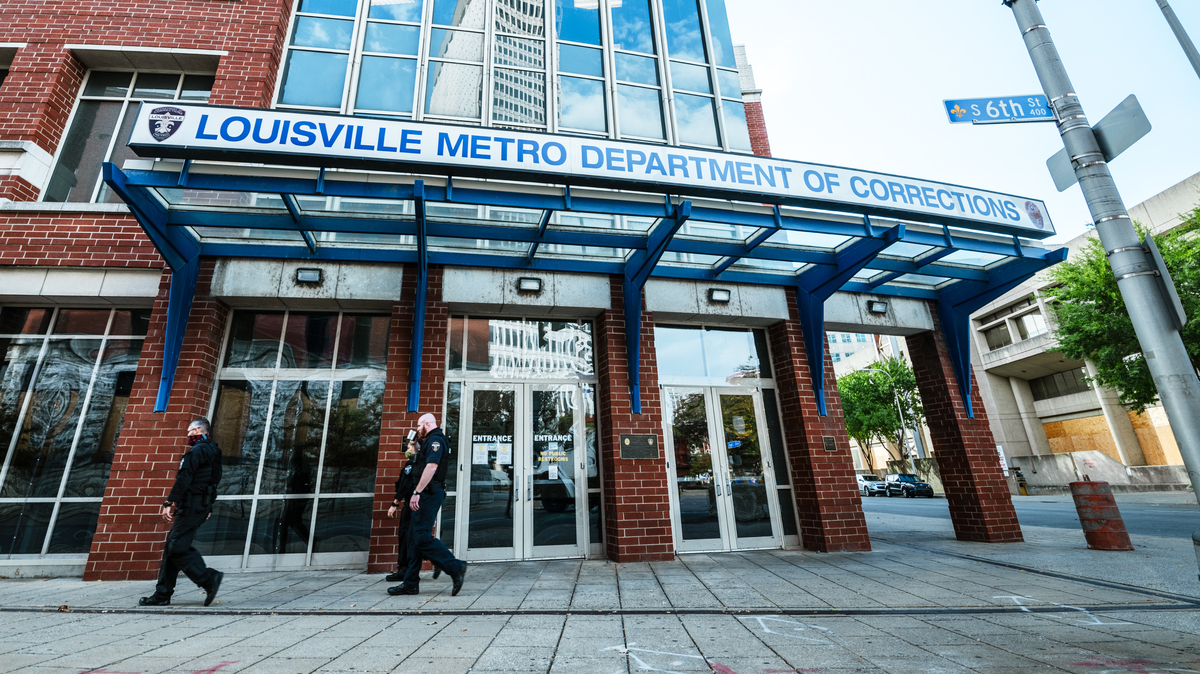 A court released some 15 hours of recorded grand jury proceedings in the Breonna Taylor case Friday – an extraordinary action that comes after a juror disputed Kentucky Attorney General Daniel Cameron's explanation for why no one was directly charged in Taylor's killing by Louisville police this spring.

Ahead of a noon deadline, Cameron's office filed a redacted version of the recording with the court in which Social Security numbers and other personal information of people involved in the case were removed. Those edits removed three minutes and 50 seconds of material, according to a court filing.

The recording is now posted online in 14 different audio files. It includes at least two interviews with Detective Myles Cosgrove, whose gun an FBI forensics lab identified as the weapon that fired the bullet that killed Taylor in March. A state forensics lab differed in its view, saying it found the evidence to be inconclusive.

In the recording, Cosgrove said the police knocked on Taylor's door for as long as two or 2 1/2 minutes before the decision was made to force the door open. As they continued to knock, one of Taylor's neighbors emerged and began to shout at the officers, he said.

"This is not a quote, but I hear something like, 'Leave that girl alone,' or 'There's a girl there,' something like that," Cosgrove said in the recording.

Shortly after that interaction, he said, the command comes to breach the door.

The audio gives a rare level of public access to more than two days of grand jury proceedings in a case that has fueled widespread protests over racial injustice and police use of deadly force against Black people and other minorities. It also could answer lingering questions about how prosecutors have handled the case.

"I'm confident that once the public listens to the recordings, they will see that our team presented a thorough case to the Jefferson County Grand Jury," Cameron said in a statement. "Our presentation followed the facts and the evidence, and the Grand Jury was given a complete picture of the events surrounding Ms. Taylor's death on March 13."

The recording focuses on testimony and evidence that was presented to the jurors — but it does not document any of the guidance or statements that prosecutors gave to the grand jury. It is customary, Cameron said, not to record matters involving prosecutor recommendations and statements, or juror deliberations, "as they are not evidence."

A neighbor also called 911, telling dispatchers, "The police are here, our glass door is shattered. ... I understand that something is going on, but I have a 5-year-old here so something needs to be explained to me."

Jefferson County Circuit Court Judge Ann Bailey Smith directed prosecutors to file the recording during an arraignment hearing Monday for Brett Hankison, the former Louisville Metro Police Department detective who is the only officer indicted on criminal charges from the night in March when police shot and killed Taylor.

Hankison has pleaded not guilty to three counts of wanton endangerment — he's charged not with contributing to Taylor's death but to firing his weapon indiscriminately, sending bullets into a neighboring apartment. Cameron said his office determined that the other two officers in the case, Cosgrove and Sgt. Jonathan Mattingly, didn't break the law when they fired multiple rounds into Taylor's apartment during a botched drug raid.

Mattingly was the first officer to enter the apartment when the door was breached, and Cosgrove said he moved close behind him to provide cover. Here's how Cosgrove described what happened after the door opened and he could see inside:

"I am immediately overwhelmed with this darkness. It is extremely dark in this apartment. As Jon Mattingly is more or less just past the threshold of the door frame, the doorway, I see blinding, vivid white light. And I see blackness at the same time, this dark, dark deep black, and these vivid white flashes.

"At the same time I'm seeing these flashes, I know that Jon Mattingly is at my feet. I'm also not hearing anything. It is completely mute.

"These flashes continue, these white vivid flashes in this darkness. And I know that someone is at my feet, and I am still at the threshold of this doorway ... the welcome mat area of this door. And Jon, this person below me, is shuffling around me, moving around me, and I believe at one point I'm standing on this person that is below me.

"I know that someone has been shot, that Jon has been injured.

"I continue to see this blinding light, these vivid white flashes, and I see this darkness in front of me followed by, and this is hard for me to explain, but I see this distorted, shadowy mass, this [inaudible] figure in front of me that is just, it's coming and going due to the flashing light.

"This is all happening, again, in seconds. Seconds. I'm still standing in more or less the same spot on the threshold.

"Again, I can hear nothing. It is completely, it's completely muted, there is no sound.

"I turn, and I see that Jon Mattingly is being pulled or scooched backwards, somehow moving back, from behind me.

"I know, or I'm fairly positive that before turning to look at, to know that he had left, or know that he is being moved, I'm almost positive that I had fired, or fired during those flashes and during that vivid, those vivid white and black and gray colors I was seeing."

Officers took Mattingly away from the doorway, Cosgrove said, and he moved with them, away from the door. As he did, he was still seeing white flashes – which only subsided when he got closer to the parking lot in front of Taylor's apartment. Once he reached a police car there, Cosgrove recalled, he told other officers to reload their weapons.

"I said, 'Unf*** yourselves and reload, because I knew I needed to do that," he said in the recording.

Thinking a threat might still emerge from the apartment, Cosgrove and the other officers took cover behind a car in the lot. Cosgrove then retrieved his AR-15 rifle from his car, he said, and he returned to a position near Mattingly and another office to cover the apartment where Taylor had been living.

It was Hankison, Cosgrove said, whom he heard arguing with the man who lives upstairs from Taylor, adding that Hankison told the neighbor to go back inside his own apartment.

The jurors also heard the 911 call placed by Taylor's boyfriend, Kenneth Walker, NPR member station WFPL reported. Walker called the emergency line after the shooting when officers had retreated from the apartment.

"I don't know what's happening," he said. "Someone shot my girlfriend."

When Cameron announced the charges in the case, he stressed that a grand jury operates independent of the prosecutor to avoid any outside influence.

"This independence is necessary to ensure that justice is done both for the victims and for the accused," Cameron said. He then said that after hearing all the evidence, the grand jury had voted to indict Hankison.

"While there are six possible homicide charges under Kentucky law, these charges are not applicable to the facts before us because our investigation showed, and the Grand Jury agreed, that Mattingly and Cosgrove were justified" in firing their guns.

Taylor's family and their supporters sharply criticized Cameron after the charges against Hankison were announced, saying they don't believe the attorney general advocated on behalf of Taylor. They noted, for instance, that Taylor's name does not appear in the indictment.

"I never had faith in Daniel Cameron to begin with," Taylor's mother, Tamika Palmer, said in a statement after the charges were announced last week. Her family and their attorneys and supporters have urged prosecutors to release the transcript and other information related to the case.

An anonymous grand juror asked the judge to release the recording of the proceedings as well as to permit jurors to speak publicly about their experience of a process whose secrecy is normally viewed as sacrosanct.

Cameron said this week that the only criminal charge his office recommended to the jurors was one of wanton endangerment – but he gave that clarification only after the judge's release order. Indeed, Cameron's refusal to provide details about the grand jury's options was highlighted in the anonymous grand juror's motion.

The filing asserted that the attorney general went too far in describing the grand jury's role.

"It is patently unjust for the jurors to be subjected to the level of accountability the Attorney General campaigned for" in his remarks after the indictment was announced, the juror's court filing said.

"The full story and absolute truth of how this matter was handled from beginning to end is now an issue of great public interest and has become a large part of the discussion of public trust throughout the country," the juror's filing said.

In addition to the state proceedings against Hankison, the FBI is investigating the police shooting that killed Taylor.