Accessibility links
New Directive In Michigan: No Open Carry At Polling Places On Election Day : Updates: The Fight Against Racial Injustice Michigan Secretary of State Jocelyn Benson issued the directive Friday. It said the presence of guns "may cause disruption, fear or intimidation for voters, election workers and others." 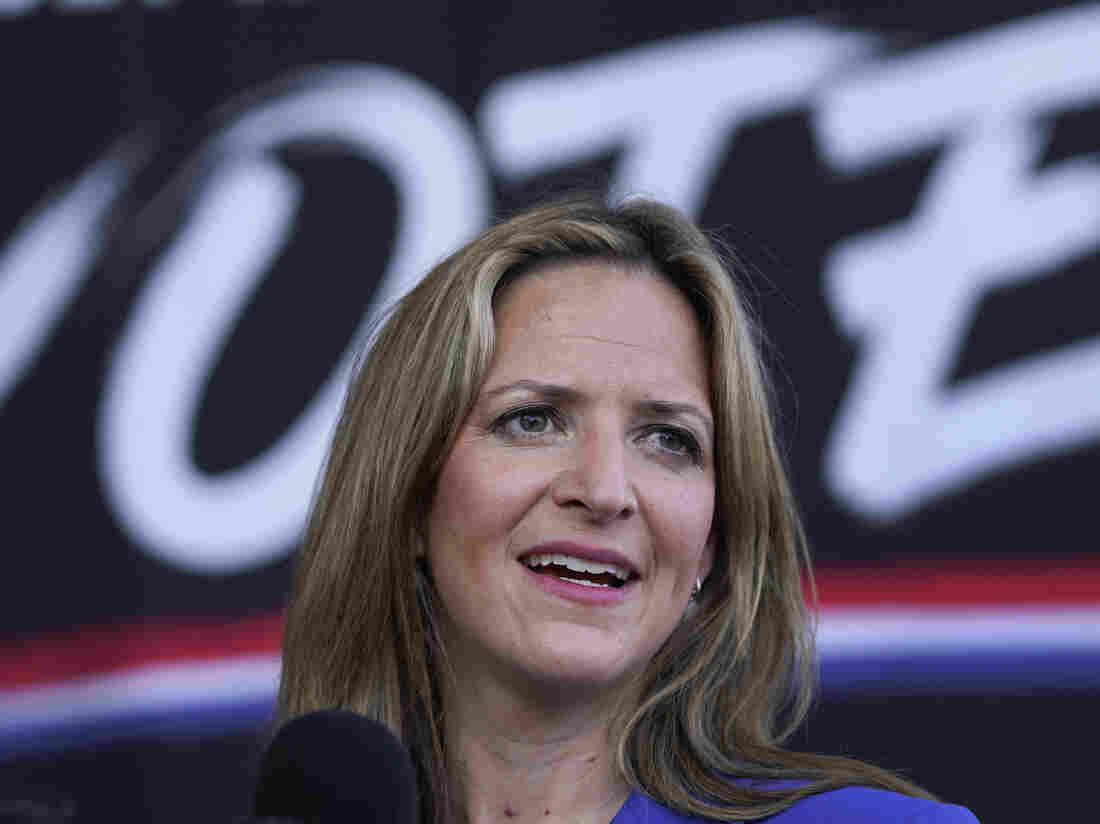 Michigan Secretary of State Jocelyn Benson announced Friday that the state will not allow people to openly carry guns at or near polling places on Election Day. Paul Sancya/AP hide caption Michigan Secretary of State Jocelyn Benson announced Friday that the state will not allow people to openly carry guns at or near polling places on Election Day.

Michigan Secretary of State Jocelyn Benson unveiled new restrictions on Friday that curb where people can carry firearms in the state on Election Day.

Her office said guns will be prohibited at polling places, clerk's offices and places where absentee ballots will be tallied. She is ordering individuals openly carrying guns in public not to come within of 100 feet of buildings containing polling places.

There are mounting concerns of possible confrontations at polling places nationwide because of heightened partisan divides this election cycle. Those fears have been boosted by claims peddled by President Trump that Democrats are trying to "steal" the election, which he has provided no evidence for.

Benson's office added that the presence of guns "may cause disruption, fear or intimidation for voters, election workers and others," according to the directive.

"Fair, free and secure elections are the foundation of our democracy," Benson said in a statement.

"I am committed to ensuring all eligible Michigan citizens can freely exercise their fundamental right to vote without fear of threats, intimidation or harassment," she added. "Prohibiting the open-carry of firearms in areas where citizens cast their ballots is necessary to ensure every voter is protected."

Michiganders have a fundamental right to vote freely and safely. Period.

Prohibiting the open-carry of firearms in voting areas ensures they can cast their ballot in person on Election Day without fear of threats, intimidation or harassment. More here: https://t.co/mVNWb9lCwH

The directive also instructs election inspectors to post signage informing the public of the firearm restrictions.

Benson's office said it was coordinating with the Michigan Attorney General and local law enforcement to make sure the order is carried out uniformly across the state.

The Election Day gun restrictions comes a little more than a week after the FBI announced it intervened in a plot to kidnap and possibly murder the state's Democratic Gov. Gretchen Whitmer.

Fourteen men have been charged with crimes ranging from gang membership to providing material support for terrorist acts.

"We've always known that there were groups out there," Whitmer said in an interview with Michigan Radio this week.

"In the last four years, the rhetoric has heightened, the space and legitimacy given has increased, and I think that we're now in a moment where these groups feel emboldened and are growing their ranks because of a lot of the political rhetoric we're seeing in our country," Whitmer added.

Biden's Test In Michigan: Winning Over Black And Brown Voters Disillusioned In 2016

Michigan, a once reliably Democratic stronghold, was narrowly won by Trump in 2016 by fewer than 11,000 votes.

With a little more than three weeks to go before voters head to the polls, Democratic nominee Joe Biden leads Michigan by more than six points, according to the latest Real Clear Politics polling tracker.

Read the Michigan Secretary of State's directive below.