Accessibility links
Tulsa Starts New Excavation As Search For Victims Of 1921 Massacre Continues : Updates: The Fight Against Racial Injustice As many as 300 Black residents were killed during the Tulsa race massacre. Researchers conducted another excavation in July but found no evidence of human remains at the first site. 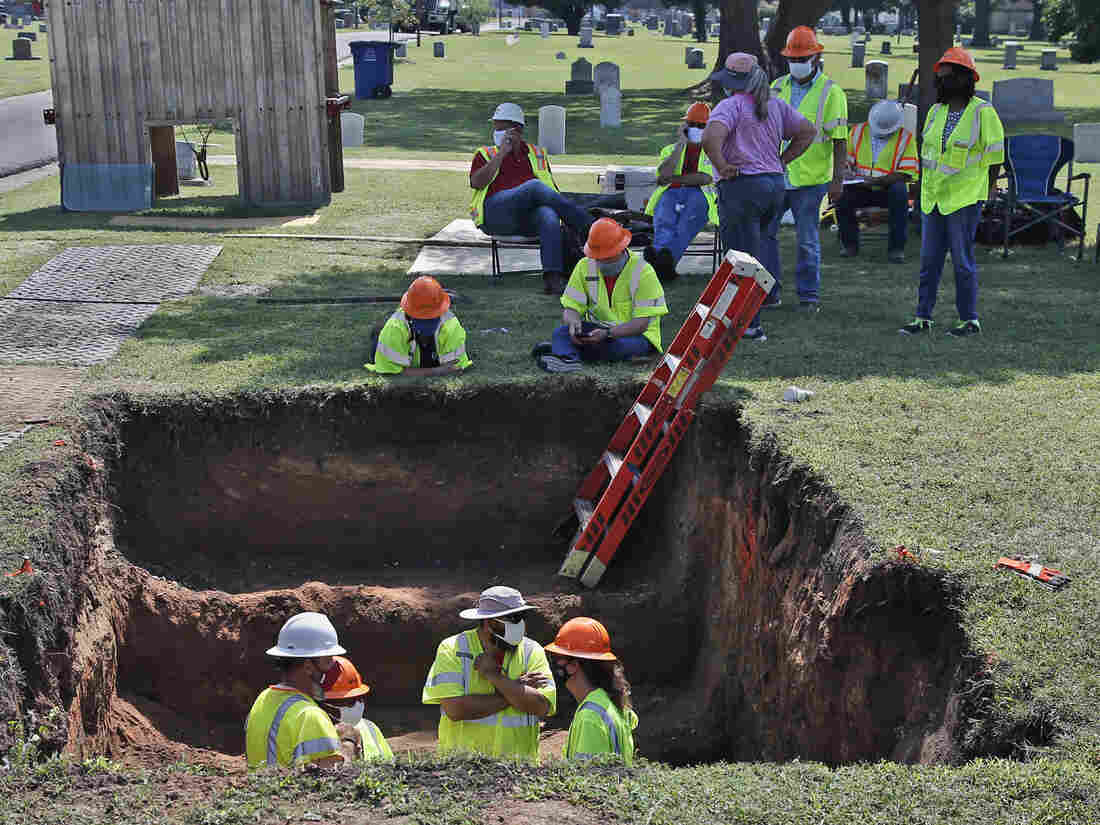 A second excavation is planned in Tulsa, Okla., this week to unearth potential unmarked mass graves from a race massacre in 1921. In July, researchers began excavation at Oaklawn Cemetery, shown here. They found no evidence of human remains at that particular excavation site. Sue Ogrocki/AP hide caption 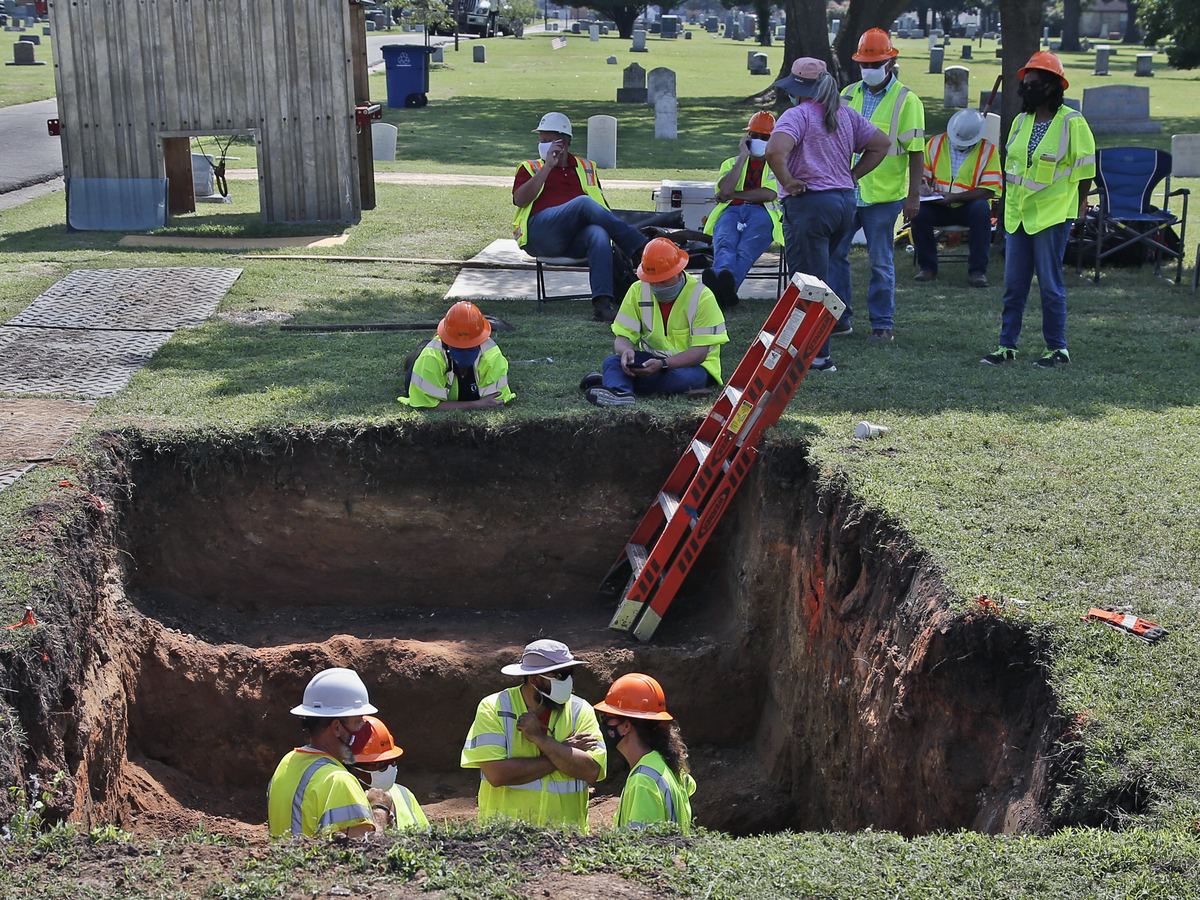 A second excavation is planned in Tulsa, Okla., this week to unearth potential unmarked mass graves from a race massacre in 1921. In July, researchers began excavation at Oaklawn Cemetery, shown here. They found no evidence of human remains at that particular excavation site.

Excavation crews are breaking ground on Monday at a new site in Tulsa, Okla., in an effort to find the remains of Black victims of one of the nation's bloodiest race massacres.

This will be the second such excavation led by the city this year, as it tries to determine where the estimated 150 to 300 victims of the 1921 Tulsa Race Massacre were buried.

Historians say white mobs targeted the area of the city known as Black Wall Street, killing Black residents and looting and burning businesses, homes and churches to the ground.

In the latest search, Tulsa is focused on two areas of the city-owned Oaklawn Cemetery.

The first is called the Original 18 site. "Funeral home records and other documents for 1921 show that at least eighteen identified and unidentified African American massacre victims were buried in the city-owned cemetery," according to an announcement by Tulsa city officials.

The Original 18 site is located near two race massacre headstones in the historically African American area of the Potters Field section.

The second location is called the Clyde Eddy site, named after a 10-year-old boy who historians say witnessed victims being buried there 99 years ago. "A core sampling, and possible test excavation, will simultaneously take place at the Clyde Eddy site, also located in the southwest section of the cemetery," the city said in a statement.

The excavation is expected to last about a week.

"Today's work is a continuation of the city of Tulsa's commitment to following through on an investigation that should have been conducted over the previous century, but was not," Tulsa Mayor G.T. Bynum said during a Monday afternoon media briefing.

He added that this latest round of test excavations would differ from the one that took place in July in the Sexton area, also in the Oaklawn Cemetery.

"The excavation earlier this summer was looking at a potential mass grave," Bynum said. "What we're doing this go-round is several locations within the cemetery, each of which is smaller in scale than what we had the potential to find over the summer."

Officials made clear that if human remains were found in the new excavation sites, they would not be exhumed. Instead researchers will be looking for clues of trauma suffered by the victims.

"A lot of the individuals recorded in Oaklawn have a record of gunshot wounds, said Phoebe Stubblefield, a forensic anthropologist working on the project.

"If they died promptly and were buried without any autopsy the projectile will still be somewhere in that abdomen, even its just in the location of where an abdomen would be within a skeleton."

In the process of documenting any remains, the city has to first establish the context for their presence in the cemetery and then get a judge to allow the city to bring the remains above ground.

"That interest will derive from the presence of trauma and or features that point to the 1921 race massacre," Stubblefield said.

Officials said the identities of 16 of the Original 18 are unknown, adding that five of the individuals are known only through funeral home records.

Hopes were high after scientists previously reported they found "anomalies" in the cemetery that could indicate the existence of an unmarked burial ground.

However, after eight days of searching in July, the city announced it found "no evidence of human remains are present in the excavation area," according to a statement.

A group of Oklahomans filed a lawsuit in September against the city and other local entities calling for reparations, including a 105-year-old woman named Lessie Benningfield Randle who survived the massacre.

There was no specific damage amount sought in the court filing, but the lawsuit estimates that just the property damage to residents of the Greenwood district is between $50 million and $100 million in today's currency.

A commission that studied the events, which took place between May 31 and June 1 in 1921, found it was mostly likely triggered by an incident in an elevator.

It determined that a Black man named Dick Rowland likely accidentally stepped on the foot of a white woman, Sarah Page, who screamed. Rowland fled, according to the 2001 report, but was later accused of sexual assault and eventually jailed.

White mobs later gathered outside the Tulsa County Courthouse demanding Rowland be released to them, according to the report. The massacre started soon afterward.

"Beyond Oaklawn Cemetery, multiple sites of interest remain and are still candidates for possible graves related to the 1921 Tulsa Race Massacre," the city said, "including 'The Canes' near Newblock Park and Rolling Oaks Memorial Gardens, where geophysical work is expected to occur."