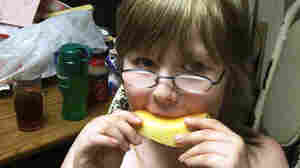 Alex Williamson, 8, is one of 17 million children who live in U.S. households where getting enough food is a challenge. Sometimes it's hard for the poor to eat healthy because it costs more. Pam Fessler/NPR hide caption

July 20, 2010 • The Williamsons of Carlisle, Pa., live well below the poverty line. And in the family's struggle to obtain enough food, nutrition sometimes takes a back seat to necessity. Hunger in America is complicated. It's not just getting enough food, but getting the right food -- and making the right choices. 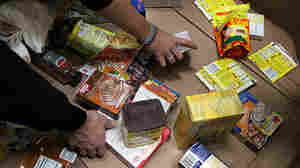 Volunteers sorted through food last fall as they stocked shelves at the San Francisco Food Bank in California. As the U.S. continues to struggle through the recession and unemployment is at record highs, food banks are seeing an increased demand. Justin Sullivan/Getty Images hide caption

July 19, 2010 • President Obama has pledged to end childhood hunger by 2015. But the number of hungry children in America has been rising: In 2008, almost 17 million children lived in households where getting enough food was a challenge. The Williamson family of five in Carlisle, Pa., who make $18,000 a year, highlight this struggle.

July 15, 2009 • In all, 21 Chrysler and General Motors plants will be closed permanently or idled over the next few years. In addition to the loss of thousands of jobs, the closures can mean a substantial drop in tax revenue for affected communities. Some cities converted the vacant auto plants into other businesses in an attempt to reinvent their economies.

July 14, 2009 • When Congress passed a new law to give people up to $4,500 to junk their old cars and buy new, more efficient ones, the auto industry cheered. But some charities say they'll be the unintended victims of this program, and so will the low-income people they try to help.

July 11, 2009 • Summers in Phoenix can be long and lethal for those who can't escape the heat. Those who live in it say the heat makes them irritable, disoriented and unable to eat. Even at night, the temperature can hover in the lower 90s.

July 7, 2009 • Some economists say the additional $20 billion allocated to the federal food stamp program is a smart way to boost spending in a recession — especially with 4.8 million new people getting aid. But critics say a real economic kick-start will take a lot more money.

July 2, 2009 • In Sacramento, hundreds of homeless demonstrate in hopes of securing land to sleep on. In recent months a tent city and a city shelter have closed. With laws that prohibit sleeping in public places, these individuals say it is now illegal for them to exist.

The Joy Of Work: A Disabled Man's Quest For A Job

July 2, 2009 • Michael Medina is looking for a job that will make him as happy as he once was when he worked as a janitor. He's aided by a job coach from the Arc of San Francisco, part of a national nonprofit network that helps people with developmental disabilities find general employment.

The Joy Of Work: A Disabled Man's Quest For A Job

May 19, 2009 • Nearly half of New York City's work force is foreign-born. And labor officials say these immigrant workers are among the most exploited. Now, after what critics call years of neglect, the state's Labor Department is testing out a more aggressive approach to help them.

April 20, 2009 • Award-winning actress Alfre Woodard stars in American Violet, a new film based on the story of Regina Kelly of Hearne, Texas. Kelly, a single mother of four, was unjustly accused of dealing drugs. Woodard talks about her role and the film's importance.

Tax Protests About More Than Money

April 20, 2009 • In her weekly commentary, host Michel Martin shares thoughts about last week's tax protests and why it is important for Presidents to have some money in their own pockets.

Tax Protests About More Than Money

April 15, 2009 • Children living in immigrant families are more likely to be poor than those whose parents were born in the U.S., but these same children are far less likely to receive public benefits to which they are entitled. Advocacy groups are now trying to help these families navigate the registration process.

March 11, 2009 • Two Democratic lawmakers introduced legislation Tuesday that has stirred up a firestorm of debate between business interests and labor groups. The Employee Free Choice Act would amend existing labor law. If passed, workers could form a union if the majority of them sign cards requesting one.

Should You Give Money To Panhandlers?

February 4, 2009 • When someone asks you for money on the street, do you give? What's the right thing to do? Patty Stonesifer, former CEO of the Bill and Melinda Gates Foundation and a Slate advice columnist, weighs in.

Should You Give Money To Panhandlers?

January 28, 2009 • Though the country is in the midst of a financial crisis, it's still possible to buy a house with no money down. Relatively small but growing numbers of Americans are turning to an obscure home loan program backed by the U.S. Department of Agriculture.

December 16, 2008 • From barbers to bartenders, people who work for tips may find themselves with empty pockets during this economic downturn. Is it OK to leave smaller tips in a recession? And if you rely on gratuities, are you earning less for the same service?

November 27, 2008 • Half of all poor people seeking help to stave off foreclosures "are being turned away at the door," an official with the National Legal Aid & Defender Association estimates. The programs, which offer free or low-cost counsel, don't have enough staff to meet demand.

October 31, 2008 • With workers losing jobs or scrambling to retain them, pressures intensify at home, too. What do the presidential nominees propose to ease Americans' work-family tensions? Sizable differences separate the two on issues such as family leave, sick time and child care.

October 22, 2008 • The nation's food pantries are seeing more people visit than ever before, but donations are way down and many food banks are empty. But while hard times are pummeling food pantries, thrift stores are doing well.

October 14, 2008 • As Wall Street struggles to rebound in the midst of the U.S. economic meltdown, pundits and analysts are still searching for answers as to what led to the collapse. Some say the real culprit is the Community Reinvestment Act of 1977.

September 22, 2008 • Warning to Atlanta's panhandlers: Don't expect handouts anymore. City officials are encouraging tourists and Atlantans to drop coins in "donation meters" instead of giving directly to panhandlers. The first one recently went up in front of City Hall.