Accessibility links
Caterpillar, Crawling Uphill : Planet Money Yes Caterpillar, the company that makes all that construction and mining equipment. They have an A credit rating. Meaning it should be pretty safe to lend them money. 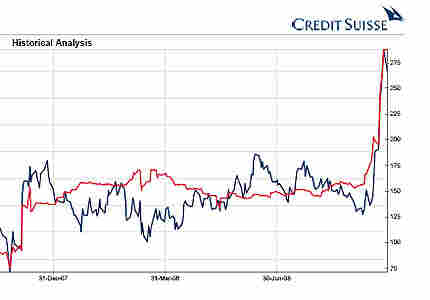 Yes Caterpillar, the company that makes all that construction and mining equipment. They have an A credit rating. Meaning it should be pretty safe to lend them money.

But borrowing suddenly got harder for them. That's the mountainous red and blue lines at the right side of the graph.

If this gets worse, the economy could be in real trouble.

Until recently Caterpillar's bonds were trading at a little over 5.5%, basically people were willing to loan them money for a 5.5% return. (I will give you, Caterpillar, $100 but later you have to give me $105.5 back.)

But as of last week, Caterpillar has to pay a full percent more. The jump happened in a single day when they issued new bonds. See the red line. (Read across to the scale on the left.) The blue line is the "spread" the how much more interest these bonds are paying compared to rock-solid treasury bills backed by the U.S. government. (Scale on the right.)

If these lines keep going up, companies like Caterpillar will have a harder and harder time borrowing money. Eventually it won't make sense for them to do it at all. Then everything slows down.

"That's just one example" says Ira Jersey at Credit Suisse kindly made the chart for us. He says credit hasn't dried up but the "spigot is slowly being turned off." It's slowed to a trickle over the past year.

Though as I mentioned here, not everyone is miserable.