Accessibility links
Who Can I Blame? : Planet Money I guess this is the number one question I get.

Who Can I Blame?

Who Can I Blame? 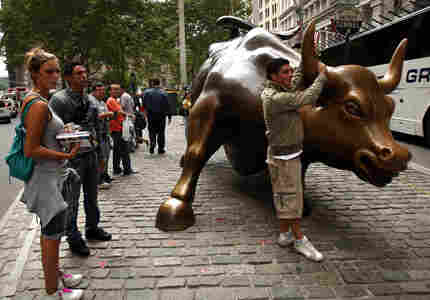 I guess this is the number one question I get.

First off, I see no evidence that it makes any sense at all to pick one of the parties and decide it's their fault, like there's some battle between sensible economic policy and crazy policy and Democrats are on one side and Republicans on the other.

That's the nature of politics.

Democrats and Republicans are equally to blame.

In fact, I would say Jimmy Carter probably stands tall as the lousiest economic manager of the modern era (and he's got some real competition). We are still paying the price for his foolishness. (Write your angry letters now).

So, let's pick out the people we do get to blame (thanks to Charles Morris and Nouriel Roubini's writings for help and inspiration).

- Lyndon Johnson, Richard Nixon, Gerald Ford, Jimmy Carter: for spending too much money and pressuring the Fed to pump more cash into the economy to avoid the necessary adjustments caused by the Vietnam War and the oil crisis. The problem didn't go away, of course, it festers and got worse.

- 1970s Fed Chairman Arthur Burns for doing the politicians' bidding instead of responsibly guiding the Fed. He knew better.

- His successor G. William Miller for being a total joke of a Fed chairman. He didn't know better, though he must have suspected he was not the man for the job. (I guess we really have to blame Jimmy Carter for appointing a man with no knowledge or ability to confront one of the greatest financial crises of U.S. history. This was a shockingly irresponsible move by Carter and I shudder to imagine what would happen if a similar corporate hack were running things now.)

- Bill Clinton for allowing the Glass-Steagall Act to be repealed without adding new regulation. It eliminated the legal divide between investment banks and depository banks without realizing that this would require a total overhaul of regulation.

- George W. Bush and his dad, I'd say, get the least blame of any of these presidents for this crisis. I know that many readers of this blog believe it is, somehow, all George W. Bush's fault. Make the case. I don't see it. I think it would have been lessened if he had kept government deficits lower and had seen the brewing housing bubble and had smarter regulation to avoid it. But this bubble was many decades in the making.

- Alan Greenspan, for keeping interest rates too low and not understanding that asset bubbles can be as dangerous as inflation.

- France and Germany and Japan, for having stupid government rules that restrict economic growth and have forced the U.S. to carry the global weight of financial innovation and economic growth. Simply put, France and Germany and Japan weren't doing enough financially exciting things to attract global investors. So, those investors flooded into the U.S. -- the only show on the globe -- and that helped fuel the housing bubble.

- Almost every country on earth. For similarly having stupid economic policies that prevent them from growing and attracting smart investment, further funneling the world's investments towards the U.S., where they can create a bubble.

- China for keeping its currency pegged to the dollar, which forces them to keep buying U.S. treasury bills -- artificially lowering interest rates and fueling the housing bubble.

- Everyone in Congress for the last 70 years, for allowing Fannie Mae and Freddie Mac to continue as a highly risky walking, talking moral hazard: a company built on the model of giving profits to shareholders while forcing the U.S. government to bear the risk. Outrageous.

- You. For enjoying the boom years without paying attention to the potential risks. For thinking that voting for one party or another somehow encourages more responsible policies. For loving the rapidly growing price of your house and using it to buy stuff. For spending more than you make. For imagining that someone out there, one guy, caused this because they, alone, are uniquely greedy and you are not greedy.