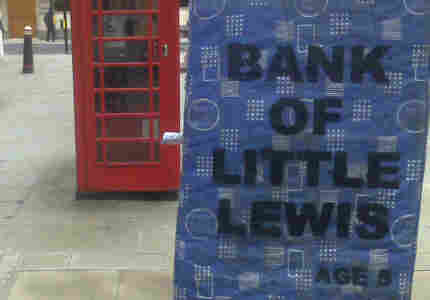 Back to the mattress in London. Dan McNamee hide caption

-- With more than $800 billion in federal spending on tap, Selectman Erik Filkorn says people in his Vermont town are hoping at least some of the economic stimulus money would help rebuild their roads and bridges. Filkorn himself isn't counting on it.

Bonus: A note from the U.K., after the jump.

Dan McNamee, who sent the photo for today's podcast, writes from London:

I took this photo on the way back to the office from a meeting in London. The situation here is pretty grim and the general outlook of the people here is quite negative.

I work as an attorney in London focusing on large financial transactions (IPOs and high yield debt). Or, at least I did. Life has definitely changed with all the bank layoffs and with layoffs at other law firms. Young bankers fleeing back to their home country as bonuses shrink along with the pound and job opportunities.