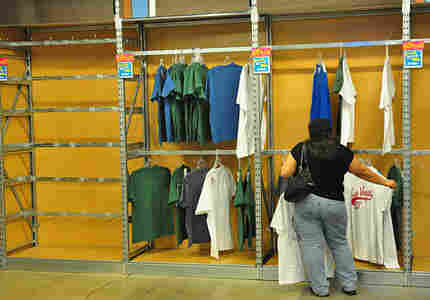 It's on sale, what there is of it, in Flushing, New York. Sarah Goodyear/Planet Money Flickr group hide caption

Folks, we're on our way to tour one of the great centers of power in the entire universe. Barring an unforeseen uncontrollable urge to blog, we'll see you on Monday.

-- With unemployment at 7.6 percent in January, San Francisco radio station KGO-AM broadcast a special "sell yourself" segment in which people who'd lost jobs got the chance to pitch prospective employers. Host Ronn Owens says calls came in at the rate of six to eight per second.

-- As the recession deepens, countries are considering fresh limits on trade. The U.S. Congress has been wrestling with a provision to have the stimulus package money governed by a "Buy American" rule, the idea of which raised anger around the globe. Meanwhile, a U.S. protectionist measure that targeted China but meant good news for Cambodia just expired.Rachel Louise Snyder, author of Fugitive Denim, reports it has do with pajamas.

Bonus: A good news letter, after the jump.

I work for Clean Water Action. We run a Canvass out of the office every day. They go door-to-door and ask people to get involved by writing letters and giving money and signing our member form. Anyway, our Canvass in Philadelphia is still bringing in a respectable amount of money. We're on budget. I think other offices are hurting more, but we have a really talented crew with good leadership and they are getting the message to people right and people are still getting involved with donations.

It's pretty interesting, considering the times, but it also goes to show that most people are still working.