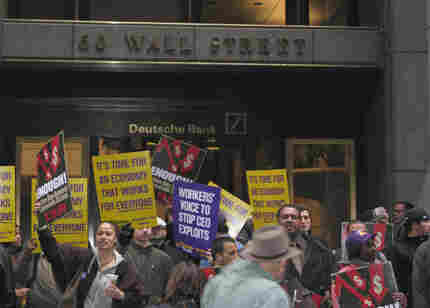 Across the street from the AIG offices on Wall St. Caitlin Kenney/NPR hide caption

According to the folks behind the website Take Back the Economy, today is a national day of action to demand "more responsible corporate behavior" and "employee free choice and healthcare reform." In New York, that meant a couple hundred protesters chanting and holding signs in front of the offices of Goldman Sachs and AIG.

Caitlin Kenney and I made the trip down from Planet Money HQ in Midtown to check out the action.

The rally hit a peak in front of AIG's offices, where we saw AIG employees standing in the skybridge above Wall St., looking down as protesters chanted "A-I-G! Shame on you!" 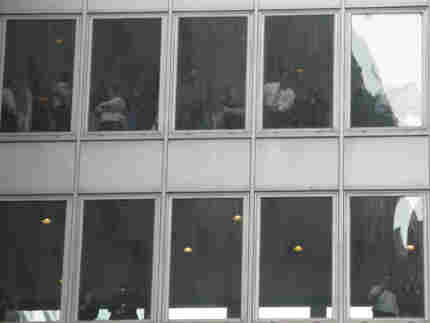 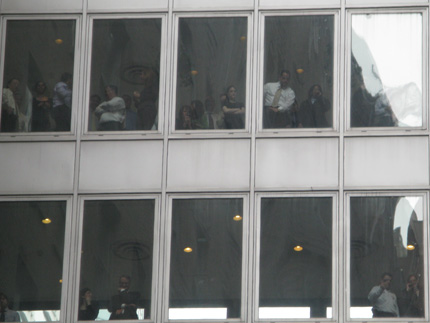 AIG employees look down on the protest. Click to enlarge.

The protesters we talked to were angry over planned AIG bonuses, but they weren't only pointing fingers at the insurance giant. Most of them said they blame corporate greed and Washington for the current crisis.

All in all, it felt like a union rally (Service Employees International Union was an organizer) fueled by a dose of populist outrage at the government's bailout plan. It started on time, the police kept everything under control, and the whole thing was over by 5 PM.