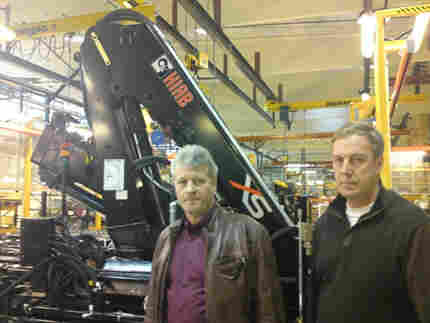 -- We take another look at the Treasury Department's plan to help banks get toxic assets off their books. Adam Davidson breaks down three different theories on whether or not the plan will actually work.

-- Our global recession anger tour takes off — with stops in China, Sweden and Egypt. In China, NPR correspondent Lisa Lim gives us the view from students and teachers at the China Center for Economic Studies in Shanghai. Sweden comes to us, when Swedish Public Radio reporter Linnea Ericsson stops by the studio to talk layoffs and unions. And from Egypt, Dr. Hani Henry shares the story of Cairo's own Bernie Madoff.

Bonus: Angry in New Zealand, after the jump.

I saw the post today claiming that NZ is not angry with the financial crisis. I don't believe that's true.

For example, in this week's Listener (a weekly magazine targetted at middle-upper class - slightly lefty) there is this interview with a former adviser to the Prime Minister suggesting unemployment might hit 11%. Note that she's a former adviser because NZ changed its government, from left wing to right wing, in November. This is the same issue of the Listener with a cover tag of, "Ask yourself, 'Can I take a halving in house prices?'".

Revenue for NZ's single largest exporter, the dairy company Fonterra, has dropped. This will have large impacts on the NZ economy because NZ's economy is very small.

The NZ government, unlike most other western nations, is refusing to stimulate. In fact, quite the reverse. I can't find the quote but the Minister of Finance has told all the government departments that there'll be no new money forthcoming - ever - and they'd better get used to it.

NZ did have a jobs summit with government, industry, unions, etc meeting to talk about new jobs. The outcome was proposals for a 9-day fortnight with the 10th day being for training funded by the taxpayer and a cycle lane running the length of the country to attract tourists. The 9-day fortnight will probably only end up applying a few firms because 1 day of training a fortnight is kind of impractical.

The cycle lane might go ahead but the proposed cost, NZD 50 million, is widely regarded as too low and cyclists are complaining that they'd rather have cycle lanes, in the cities, for cycle commuters rather than a long one for tourists. It should also be noted that NZ is rather mountainous so a cycle tourist wanting to get through the middle of the North Island, say, had better be very well conditioned.

NZ has a very small economy that is almost completely dependent on exports. The two biggest industries are dairy and tourism and the money generated from those industries is what the domestic economy runs off. How the crisis affects the rest of the world will definitely affect New Zealand.