Accessibility links
Finding An Escape In Romance? : Planet Money Why are sales of romance novels recession-proof?

Finding An Escape In Romance?

Finding An Escape In Romance? 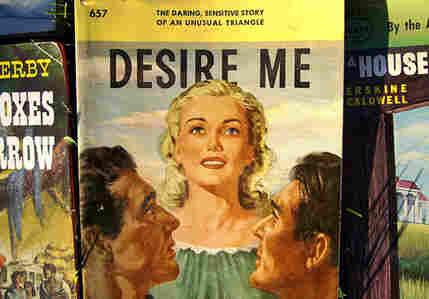 There's definitely no shortage of bad news these days, and it seems many Americans are finding solace in something both escapist and inexpensive: love.

U.S. News and World Report cites romance novel publishers and condom makers in its top 10 list of "winners in the recession," citing the robust sales figures for each.

Harlequin -- the leading publisher of series romance -- says its year-over-year sales of titles like Naked Attraction and Mistletoe Cinderella grew at the end of 2008, even as total U.S. book sales declined.

The impulse to find haven in the dramatic story lines of romantic fiction does make sense. And perhaps that's partly why Harlequin's diverse line of novels, from medical romances (e.g. One Night With Her Boss) to historical love tales (e.g. The Wicked Baron) to NASCAR fantasies (e.g. Running on Empty and Victory Lane), is doing so well.

But if you've ever cracked the cover of one of these grocery-aisle paperbacks, you know the plots are not entirely free of emotional turmoil in the heroine's fictional "quest for true love."

And, as LA Times columnist Megham Daum points out, readers might be inclined toward this romantic tension -- toward suspenseful uncertainty -- because they relate to it.

Maybe these books are recession-proof not because they offer an alternative to uncertainty but because they reflect it back at us -- with a lot of sex thrown in (and a happy ending).