Accessibility links
Hear: Banking On The FDIC : Planet Money On today's Planet Money, the FDIC explains why you can trust it. Plus: A G20 preview.

Listen
Hear: Banking On The FDIC 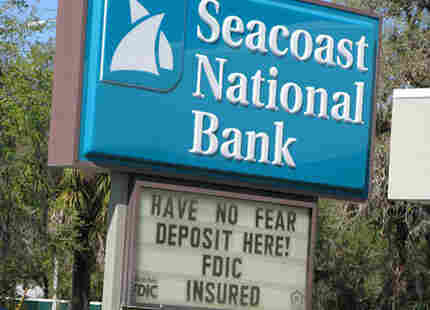 -- The leaders of 20 nations walk into a room. . . .and solve the whole economic mess in a day. Don't laugh — that's the aim of the G20 summit in London tomorrow. Adam Posen, deputy director of the Peterson Institute for International Economics, helped the U.K. think through its agenda. He'll be sitting in the good seats all day Thursday. (More: Posen's group letter to the Financial Times, reg. req'd.)

-- For ordinary folks just trying to save money, feeling safe is all about the FDIC. Chana Joffe-Walt tracks an FDIC takeover of a failed bank (full tape). Then John Bovenzi, the FDIC's chief operating officer, tells us why his agency can still handle the load.

Bonus: Where are the women economists?

I was listening to your Monday podcast (I think, perhaps it was last week's) and one of you made a comment that sparked a thought. I don't know if you've ever had a female economist on the show (apart from the correspondents and the listeners you call up). Am I right about this? If so, why? I know the financial situation is obviously paramount, but perhaps this is a topic to keep in the back of your minds as a topic for a future show. Why is there such a gender gap amongst economists and could that translate into a bias in how we hear or perceive our economy? Just a thought...

We have had women economists on the show, notably Pietra Rivoli. I do notice that most of the economists we end up talking to are men, and I think we all wish to hear from many more women than we do. It'll be a great day when Planet Money has so many voices, from so many backgrounds, that no one's missing at all.

But I'm wondering if Per has a larger point, that gender might influence the way we see the economy or listen to people talking about it. Just wondering.