Accessibility links
Hear: That Lime Green Coat : Planet Money On today's Planet Money, the link between clothes in London and pita in Cairo. Plus: Freelancers! 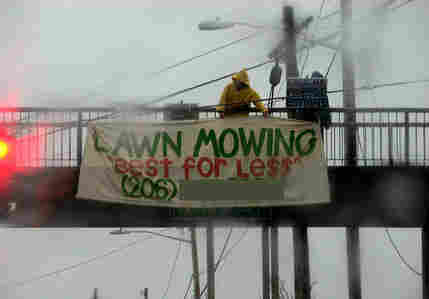 -- What's a lovely coat in London got to do with delicious pita in Cairo? More than you might expect, as Chana Joffe-Walt discovers.

-- Until the financial crisis began, Brandon Mitchell had been happily freelancing as an IT consultant for years. Now his work has dwindled by 75 percent. Sara Horowitz of the Freelancers Union suggests its time for new ways of tracking, and helping, the nation's self-employed.

I noticed something today that's not quite an "economic scene" but it's close: I frequently look up definitions using the google toolbar by typing "define:[your word here]". The Google toolbar usually helps you out by listing "Suggestions" as you type based on frequently searched terms, and I found it funny that "define:socialism" was the most popular, and that "define:recession" was also ranked at #4! Just type "define:" and see for yourself! 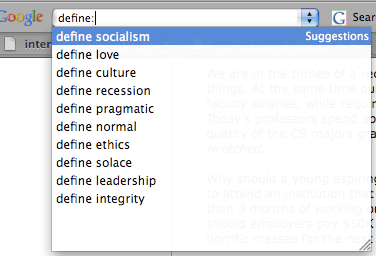 What the Google toolbar suggests for "define:" Screengrab from Ben Anderson hide caption