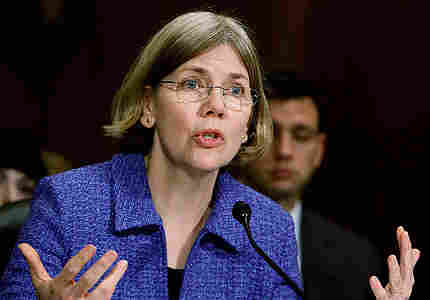 -- We're going to file this one under Intense Planet Money Interviews. Bailout monitor and Harvard law professor Elizabeth Warren sat down with Adam Davidson this week and went at least 15 rounds over what's really wrong with the economy and what should be done to fix it. Warren, chair of the Congressional Oversight Panel, says the problem is as much a credit crisis as a slide in conditions for average American families.

-- Engineer Jocelyn Lally works for a big firm in Chicago, where she says several of her colleagues have recently been made part-time. The resulting quiet has led to an unexpected economic indicator.

Bonus: From Philadelphia, a living indicator.

I have an indicator for you. Five.

That was the number of baby turtles, in two plastic bins, that I saw for sale by a man walking from car to car on the Market-Frankford El in Philadelphia last Friday.

I've seen lots of people selling stuff on the El. Bootleg DVDs and mix CDs, colognes and perfumes, candy and snacks, watches and jewelry. I once saw two guys negotiate the purchase of an engagement ring. And there's been a noticeable increase in the number of "vendors" walking up and down the train. But this is the first time I've ever seen someone selling anything that was alive.

On second thought, maybe the indicator should be four. That was how many baby turtles the man had when he walked past me in the other direction about 15 minutes later.