Accessibility links
Hear: Follow Suit : Planet Money On today's Planet Money, an early entrant in the race to sue over the financial crisis. 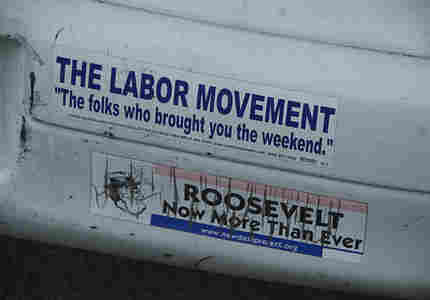 -- The Planet Money crowd had a lot to say about our interview with Elizabeth Warren, most of it negative. Twitter pal Renee Rico takes the soapbox.

-- One set of not very popular folks is now suing another. It's bond insurer MBIA versus financial giant Merrill Lynch. At issue: whether the latter misled the former into selling insurance way too cheaply. Securities lawyer Zachary Rosenbaum decodes the briefs.

Zero is the number of proms, musical concerts, theatrical performances football homecomings, basketball games and other sporting events 21,000 kids in Reynoldsburg and South-Western City Schools (near Columbus, Ohio) have to look forward to.

Goad sends news that local voters rejected a property tax that would have given the school district $21 million a year. Without the extra money, it's out with the extracurriculars.

"I can't stay here," sophomore Nick Kowaleski, a wrestler and runner, told the Columbus Dispatch. "I have to go somewhere to get a scholarship for college."

Superintendent Bill Wise had this to say:

"What's very clear is this community is trying to send us a message that we haven't heard. What we have heard is that they wanted us to tighten our belts and improve the academic performance in the district. We've done that. Yet the ballot doesn't acknowledge the fact that we have listened."