Accessibility links
Bloody, Miserable Medieval Economics : Planet Money On today's Planet Money, a professor of medieval history reveals what the economy was like in 12th and 13 centuries. Brutal and self-defeating only begin to describe the era of feuding guilds and tax-collecting knights. 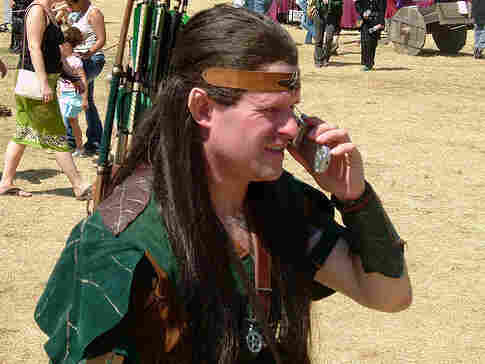 "Thou sayest I owe how much to the crown?" Zoomar/Flickr/Creative Commons hide caption

Before governments had regulators with suits and briefcases, says William and Mary history professor Philip Daileader, they had knights. The Lancelots of real life went around the kingdom forcing people to pay whatever the knights decided they owed. It was a brutal economic approach.

If you think the knights were tough, be thankful you never faced the guild system. It existed to eliminate competition and benefit producers at the expense of consumers. Craftspeople fought each other for control and tried to limit access to the market — at their own expense, it turned out.

Bonus: After the jump, a sign that they're not hiring.

Dean Flatt writes from New Jersey, who followed an 18-wheeler north on I-95 in Virginia:

On the rear door of the trailer, along with a number of safety bulletins, was one prominent sign saying, "NOW HIRING Company paid training" and below these words should be a phone number, but instead were black markings redacting the numerals like text in a publicly released CIA document.

I guess maybe next year when the jobless recovery is more fully underway, they'll put the contact number back up.