Accessibility links
Fight The Recession: Support Your Local Pub : Planet Money Terrible news: British pubs are closing at a rate of 52 a week. 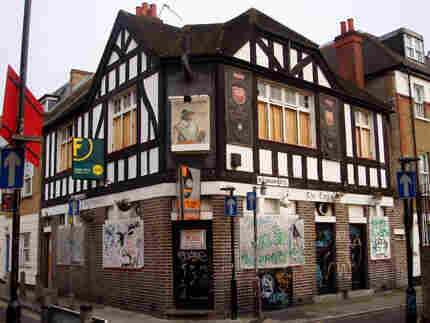 What was once the Conquerer Pub in Shoreditch, London. Ewan-M/Flickr hide caption

This could be the greatest tragedy of the recession for the U.K.: Humble British pubs -- the kind of place Britons can go for a relaxing pint (or five) and chips on the way home from work -- are closing at a rate of 52 a week, according to the British Beer and Pub Association. That's 2,377 pubs closed, and about 24,000 jobs lost in the past year.

The association's report also says that local pubs were the hardest hit, especially due to the economic downturn. Interestingly, the key to survival seems to be selling food: pubs that focus more on selling food are only closing at a rate of one a week.

But it isn't only the recession to blame. Industry representatives said that 20 percent increase in the U.K.'s beer tax (which is set to rise), as well as increased regulation (such as the recent pub smoking ban).

The pub is ingrained in the British sense of identity -- so much so that two MPs from the All Party Parliamentary Save the Pub Group tabled a motion in House of Commons urging banks to lend to beleaguered pubs, and encouraging fellow lawmakers to "support their local pubs."

The recession is destroying British pubs, changing how we bury our dead, and ending Sunday in France. It seems like fallout from the downturn is making fundamental changes to our very culture -- on both sides of the Atlantic.