Accessibility links
Why Do They Walk In Bike Lanes? : Planet Money An economic riddle for the city.

Why Do They Walk In Bike Lanes?

Why Do They Walk In Bike Lanes? 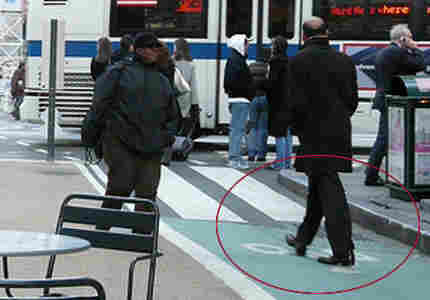 Near Times Square: the man on the right is standing on the bike symbol. adrimcm//CC BY-NC-ND 2.0 hide caption

One cyclist I know calls them "zombies" -- people on foot who wander out into bike lanes and tread along, ignoring perfectly good sidewalks and clogging the works for cyclists. Like most people who live in cities, I'm a pedestrian, too, so I do have some sympathy for them. But I'm also a daily bike commuter. As I ride back and forth from Planet Money headquarters, I've begun wondering about the economics of my problem.

Twitter pal @meghan_e suggests that once a single pedestrian wanders over into the bike lane, it opens a "new market" and the others follow.

@JasonInNJ takes another approach. He suggests it's an example of the Tragedy of the Commons, a phenomenon described by Garrett Hardin in which individuals acting in their best interest ruin a shared resource.

In either case, I'm still wondering about a fix for this.