Accessibility links
Cash For Clunkers: Couple Gains 10 MPG, With Help From Uncle Sam : Planet Money A couple in Michigan send photo evidence of their spin through the government's car-buying program. They went from a failing minivan to a new Chevrolet Cobalt. 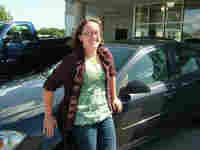 Among the people who took advantage of Cash for Clunkers are Michael Langdon and his wife, Baraba Ebel-Langdon of Newaygo, Mich.

The mileage in the photo of above is considerably less, as that's when the Town and Country overheated and left them stranded by the road. After the jump, what they bought. 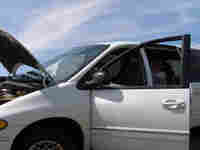 The Town and Country broke down by the side of the road one day. Courtesy of Michael Langdon hide caption

The couple went for a Chevrolet Cobalt, which the government says gets 24 miles to the gallon in the city, 33 on the highway.

They got $3,500 from Cash for Clunkers, and could have gotten another $1,000 had they opted for a standard transmission. The Cobalt was stickered at $17,000, but the government boost and a family discount dropped the price to $10,000.

Economists debate whether a program like Cash for Clunkers creates demand or simply pulls in people now who would have bought later -- whether a bump in sales now means a dip in sales later.

For Langdon, the case is clear. "This purchase would not have happened without CFC," he writes.