Accessibility links
EVE Online's Got A Real Economist (And He's From Iceland!) : Planet Money The multiplayer game EVE Online has been the scene of banking crisis. It's being analyzed by the game's official economist, who should know a thing or two about financial calamity. 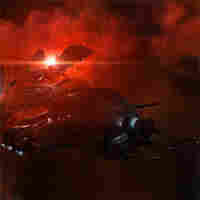 You may think we here at Planet Money are the biggest geeks around. Here's compelling evidence to the contrary: EVE Online, the "massively multiplayer" game that's now witness to a virtual banking crisis, has its own economist.

Eyjolfur Gudmundsson reports in his second quarter 2009 newsletter that EVE is a closed world with a very, very free market. Gudmundsson, who's from Iceland and should know a thing or two about banking crises, writes:

"Financial institutions are not regulated by any high level authority within EVE. Deposits with banks are not insured. There is no government to support the financial system or any lender of last resort.

EVE's biggest player-run bank, EBank, froze customer accounts after panicked depositors demanded the return of their InterStellarKredits, or ISK. The problem began when the former CEO of EBank stole players' ISK and sold it in the real world for real money, Gudmundsson writes. That's against the rules, since EVE is designed to be a closed system. EVE shut the bank down for long enough to sort the matter out. The economist says the real world can learn something here:

"As of now, the question still remains open for both real life institutions and EBank: will they be able to regain the trust of their depositors and investors in the long run?"

Gudmundsson concludes the Q2 report with a note with an overall seal of good health -- a case of "mild deflation" notwithstanding.