Accessibility links
Taking Health Care To The Economist : Planet Money On today's Planet Money, a hospital administrator describes the challenges of controlling costs (when the doctor wants a helicopter, for instance) and an economist says no one in the system has incentives to make things cheaper. 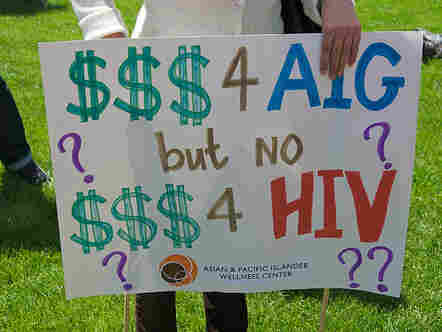 The cost of health care is rising faster than our economy is growing — it's an economic train wreck waiting to happen. The debate over fixing that situation rests on a couple of key questions, namely how do we get coverage for everyone and how do we control costs.

That second question turns out to be much harder to answer. For all the talk about healing, a hospital is also a business. Cutting costs at a hospital falls to a hospital administrator like Daniel Kearns. He worked at a string of hospitals in the Southwest. Kearns says the hardest part of his job was dealing with doctors, like the one who wanted baseball season tickets for his family and the one who wanted a helicopter for transportation.

Those may sound wacky, but Harvard health economist Tom McGuire, says neither patients, doctors nor hospitals have real incentives to trim expenses because they're all spending someone else's money.

Bonus: Out of college, out of work, out of insurance.

We asked for your tales from the job market. A final one for today.

I graduated with a BS in Communications (concentration on Media Studies) from the University of Texas in May of 2008 — right when the recession started to get warmed up. When I got back from my trip to India, I started looking for what I've been calling my "career job." I've been unable to find one.

This is the 13th month of my job search, and I've held a lot of different part-time jobs in the meantime. I sold pollution free electricity door to door for an oddly religious subsidiary of Green Mountain Energy, I worked for the county parks department here in Travis County, and I am currently teaching English to Korean immigrant youth. This latest job has by far been the most gratifying (and lucrative), but I am still unable to make ends meet and still rely on occasional begrudging loans from my father.

I have no health insurance and a growing number of very minor medical issues (a sprained ankle that just won't heal, for instance). Through all this the most hours I've been able to work has been 30 per week, and the average has been closer to 20. I'll continue to apply for jobs, and utilize my dwindling network, but I'm getting pretty tired of baloney sandwiches and hot dogs for every meal.